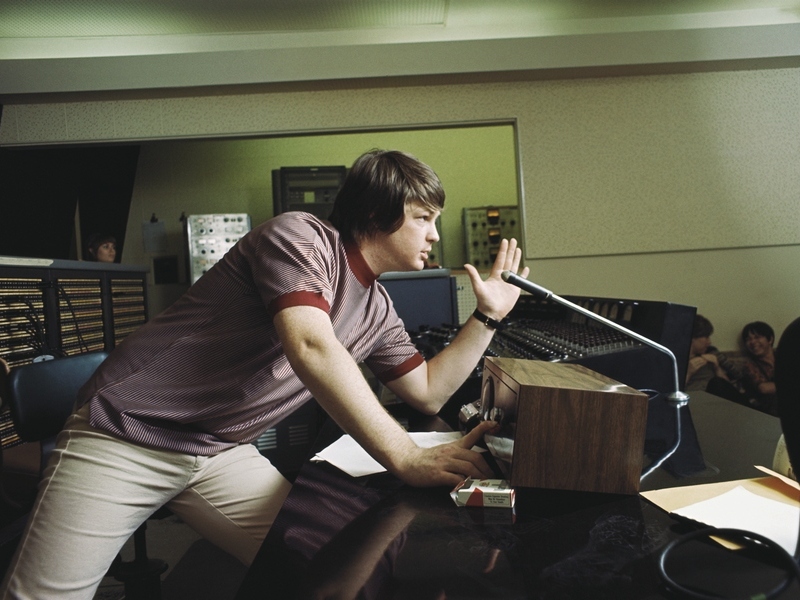 It was 56 years ago today (May 16th, 1966), that the Beach Boys released their legendary Pet Sounds album. The album, which included the group's classic hits “Wouldn't It Be Nice,” “Sloop John B.,” and “God Only Knows,” was like most of the group's early work; the brainchild of their leader and producer Brian Wilson. Wilson had retired from the road in 1964 to write and produce material while the other members — brothers Dennis and Carl Wilson, cousin Mike Love, Al Jardine and Bruce Johnston — spent up to 150 days a year on the road. Pet Sounds is the first complete Beach Boys album to mainly feature session backing musicians, and is considered rock's first symphonic album.

Although upon release, Pet Sounds was considered something of a chart failure in the U.S., where it peaked at Number 10, in Britain the album was hailed an instant classic, inspiring major works from rock's greatest songwriters, including John Lennon and Paul McCartney and the Who's Pete Townshend.

Wilson sketched out his ideas thematically with lyricist Tony Asher, and together they created a romantic, coming-of-age concept album, which dealt with such adult themes as pre-marital sex, leaving home, and coping with emotional and romantic limitations.

Al Jardine says that the group was amazed by the progress that Wilson had made both musically and lyrically while they were away on tour: “We were just in a touring mode almost constantly up to that point. We'd just come back from Japan and it was a total revelation to us. I mean, we hadn't heard anything like that, other than like, y'know, like 'Let Him Run Wild' was kind of in that vain, in that vernacular. If you remember that one, I loved that one. And when I heard these other songs I went 'Well, that's an exponential leap' (laughs).”

Jardine recalled the workmanlike atmosphere while recording the album's intricate harmonies: “We'd be all alone, just the four (sic) of us in this gigantic cavern of a recording studio called Columbia — Columbia Studios on Sunset Boulevard. I mean. . . It was like being inside of a giant space station (laughs) and you're trying to sing these tender and beautiful and moving harmonies and stuff. And we did it. Somehow we pulled it off. But it was strange, like living in a vacuum.”

The late-Glen Campbell was one of many studio musicians who played on the album. He told us a while back that he would often listen to the box set of Pet Sounds sessions to recall his time in the studio with Wilson: “He'd tell you all that stuff, where he wanted it, how he put it together. You can listen to the making of the records. I've sat and listened to that CD, I stick it in my car just so I can recall and it takes everything away, and I can listen to what we were doing in the studio, 30 something, 40 years ago.”

We asked Mike Love whether it's true that he always had a problem with Brian Wilson changing the Beach Boys' musical formula: “Well, people have said the same thing about Pet Sounds, that I didn't like Pet Sounds. That's a bunch of crap, because I went with Brian to play Pet Sounds for the A&R guy at Capitol Records. We played it for him, I named the album (laughs). Because at the end of the record, he didn't know what to call the record. And at the end of the record you have this dog barking at the sound of this train going by. And I said, 'Well, why don't we call it Pet Sounds?' Double entendre, of course.”

The album has often battled the Beatles' Revolver and Sgt. Pepper's Lonely Hearts Club albums on “Greatest Albums” lists. Over the years, Paul McCartney has called “God Only Knows” his favorite song of all time.

Brian Wilson and his band have often performed the entire Pet Sounds album as part of his solo shows. A live album, titled Pet Sounds Live In London, was released in 2002.

In 2006 and 2007, Wilson and Al Jardine performed the Pet Sounds album in its entirety at a handful of shows.

During the Beach Boys' 2012 50th anniversary shows, the group played five songs from Pet Sounds in its nightly setlist — the title track, “Wouldn't It Be Nice,” “God Only Knows,” “Sloop John B.,” and “I Just Wasn't Made For These Times.”

We asked Brian Wilson how it feels to see his most beloved musical creation realized on stage night after night over 50 years after its release: “Well, I wrote it when I was about 20. . . oh, I think 24. We reproduce it onstage exactly like the album. Feels great. It's easier to do Pet Sounds. Smile is kind of a rough album to do.”

We asked Brian Wilson if after all these years, he's ever gotten sick talking about the back-story of how he created Pet Sounds: “No, no, no — I love to, 'cause it's probably one of the best albums we ever did.”

The Beach Boys will kick off their 60th anniversary celebrations on June 17th with the deluxe and expanded release of its 2003 Sounds Of Summer: The Very Best Of The Beach Boys collection.

The 80-track set will feature four Pet Sounds tracks — “Wouldn't It Be Nice,” “Sloop John B.,” “God Only Knows,” and “I Just Wasn't Made For These Times.”