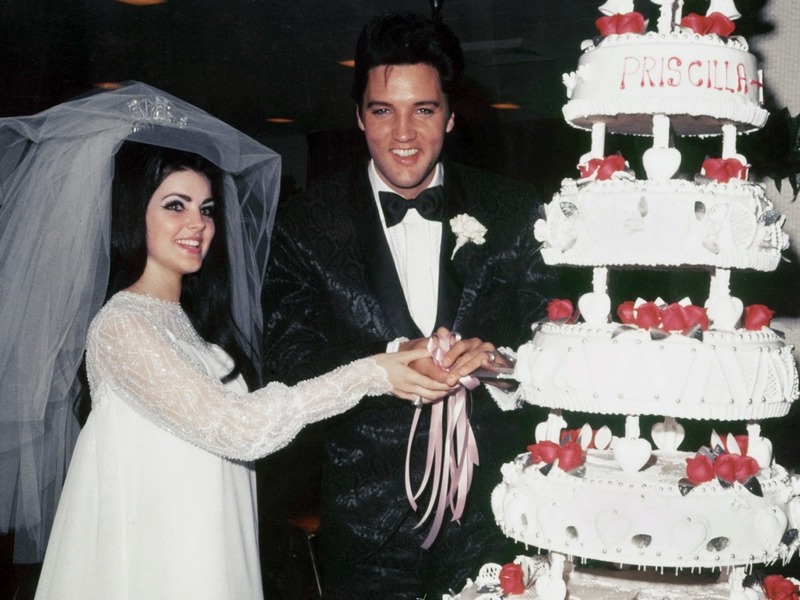 55 Years Ago: Elvis & Priscilla Get Married

It was 55 years ago Sunday (May 1st, 1967) that Elvis Presley married Priscilla Beaulieu at Las Vegas' Aladdin Hotel. The short eight-minute ceremony, which took place at 9:00 a.m., was officiated by State Supreme Court Justice David Zenoff.

Following the vows, a special banquet was held below the hotel's casino for around 100 guests who dined on “ham, eggs, Southern fried chicken, Oysters Rockefeller, roast suckling pig, poached and candied salmon, lobster, Eggs Minnette, and champagne.” Following the banquet, the Presley's held a press conference before flying out of Las Vegas.

Elvis and Priscilla met in 1960 while he was stationed in the Army in Germany. Her father was an Air Force officer also stationed there. In 1963 Priscilla moved to Memphis to be with Elvis, first living with his father Vernon and stepmother Dee while she finished high school, before eventually moving into Graceland with Elvis.

The couple had one child together, Lisa Marie Presley, who was born nearly nine months to the day after their wedding.

Priscilla has said that although they had been living together for several years, they did not consummate the relationship until they were married.

Elvis and Priscilla's marriage happened towards the end of Elvis' “movie years” — a period where the “King of Rock N' Roll” was pretty much sleepwalking his way through light musical comedies in which he lip-synced lousy material to extras, kids, and dogs. Fan Pete Townshend told us that he viewed Elvis' movie years in the 1960's as a wasted opportunity: “I was watching the TV yesterday, and Blue Hawaii was on. I just thought, 'What was Elvis doing?!' Y'know, the Beatles were about to appear, Ricky Nelson was putting out 'Hello, Mary Lou,' the Everly Brothers were doing 'Cathy's Clown' — the most unbelievably brilliant music! Dion was doing great stuff. It was the most fantastic records being made! (Elvis was) dressing up in Hawaiian shirts, playing the ukulele and getting married on a raft.”

Tragically, on July 13th, 2020 Elvis and Priscilla's only grandson, Lisa Marie's child, Benjamin Keough, shot himself with a shotgun at his home in Calabasas, California. He was 27-years-old.