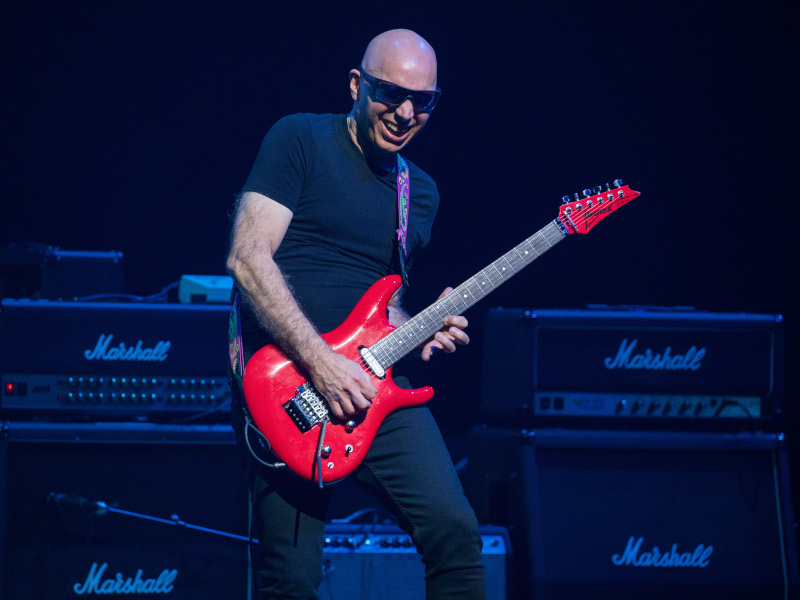 Guitarist Joe Satriani confirmed bassist Jason Newsted's recent revelation that he was being tapped for possible inclusion in an upcoming Van Halen reunion. Ultimate Classic Rock transcribed some of Satriani's chat with Rock Of Nations with Dave Kinchen podcast.

Satriani — who played with both Sammy Hagar and Michael Anthony in Chickenfoot — shed light on what still seems a possible tour saluting Van Halen's classic catalogue, revealing, “I've been talking with Alex (Van Halen) and Dave (Lee Roth) for about a year about doing something — a tour, something like that — that was going to be a true tribute to Eddie (Van Halen) and the Van Halen legacy. For me, it was a terrifying prospect of doing something like that, but I realized that it was something that would be a real labor of love for me. I was just so honored to take on the challenge.”

Satriani admitted the players behind the still-unannounced project were a bit put out by Jason Newsted coming out and divulging plans that either didn't include him — or were far from being a done deal: “These things are always happening in the music industry, and you're supposed to keep very quiet about it because sometimes they don't work out. There's usually about 10 crazy ideas that float around, and musicians are always like, 'OK, I won't say anything about this, because it may not work out. I don't want to hurt this person's feelings or disrupt any other business plans.' So yeah, we were all pretty shocked that Jason wanted to go public with it because we were all sworn to silence.”

Satriani revealed that the concerts were being constructed as covering the entire Van Halen catalogue: “The thought of representing all the eras of Van Halen, that's pretty daunting. Just from a guitar player's point of view, Eddie progressed remarkably as a player and as an inventor, and those two things, they kind of went together from Van Halen 1 all the way to the last album. And when you sit down to actually learn it and pull it off, you go, 'Wow, not only do I need talent, but I need certain gear,' because certain things won't work unless you've got this amp and it's doing that. So that's also another thing to deal with.”

Satriani went on to say: “It's very complicated, and all I can really say about it is that if it does happen, I know we'll make it the greatest thing ever for the fans, and we'll all celebrate together. Not only the great Eddie Van Halen but the legacy that that band created, the amazing amount of music and the goodwill and good vibes they created as a band.”

Last night (April 18th), David Lee Roth was pressed by the Van Halen News Desk to share his thoughts regarding the rumored Van Halen tour. “Diamond Dave” emailed the site, and wrote, quote, “IN MY MIND VAN HALEN 4r, IN THE AGE OF COVID IS GOING TO REQUIRE TWO OF US FOR EVERY POSITION. SATRIANI AND (Steve) LUKATHER, (Michael) ANTHONY AND (Jason) NEWSTED, AL (Van Halen) OR TOMMY LEE. PROBABLY THE ONLY ONE WHO COULD DO MY JOB TODAY WOULD BE PINK.”