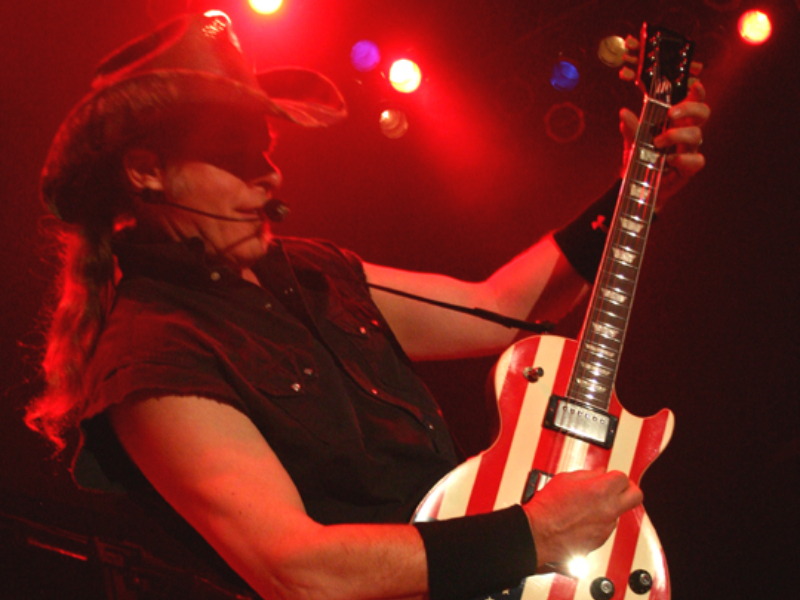 Ted Nugent Slams Taylor Hawkins For Being A Drug User

Ted Nugent has taken a pretty broad swipe at late-Foo Fighters drummer Taylor Hawkins in his online webcast “The Nightly Nuge.” The conservative the tea totaling rocker spoke about Hawkins, who died on March 25th at age 50 after suffering an alleged drug overdose in Columbia.

Blabbermouth transcribed some of Nugent's rant on the drummer, in which he said, “It's heartbreaking on so many levels. 50-years-old with a horrible, long-term celebration of substance abuse. I'm not. . . Well, I am casting judgment because substance abuse is selfish. His wife and daughter, they should have been taken into consideration. Is spending time with your wife and daughter more important than getting high or less important than getting high?”

Nugent went on to discuss his connections with various musicians who met their demise from substance abuse , recalling, “I told Jimi Hendrix, I said, 'No, I don't want your dope, and it's gonna kill you, Jimi.' Bon Scott would come to the studio when my band was recording 'Weekend Warriors' out of Miami and AC/DC was coming in (and working on) 'Highway To Hell' — just phenomenal musical powers. And he'd come in drunk every day with a (bottle of) Jack Daniel's or an Old Grand-Dad (whiskey) and he'd go, 'Hey, Teddy, try some of this.' And he smelled like a diaper. What a talent. What a nice guy. These were all nice guys.”

Nugent went on to say, “So, if you loved Taylor Hawkins — I loved him; I loved the man; I still love him. But I love his wife and daughter more. Because they didn't break his heart; he broke their heart. . . So, God rest Taylor Hawkins's soul and all those stoners and drunks that died prematurely. Thank God for every day you're above ground. Breathe deep, concentrate on the positive and show reverence for your gift of life and your sacred temple. Do not poison your sacred temple. It's that simple.”