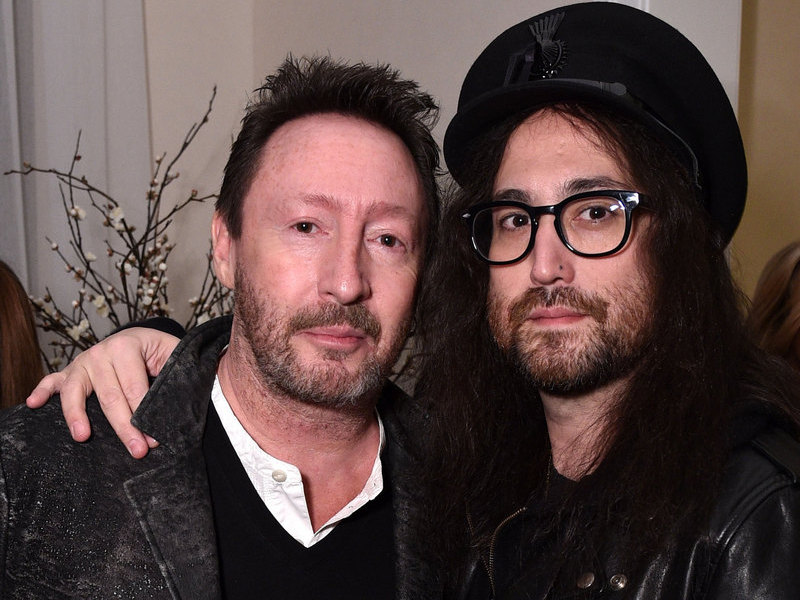 Happy Birthday to Julian Lennon, who turns 59-years-old today (April 8th). Julian, who is John Lennon's first son with college sweetheart, the late-Cynthia Powell Lennon, holds the distinction of being the first natural child of any the Beatles, being born on April 8th, 1963. Julian is also the first of the next generation to pursue a recording career, and released his critically acclaimed debut set, Valotte — which was produced by the late-Phil Ramone — in October 1984.

Julian has signed a new global recordings agreement with BMG ahead of his new album, titled Jude, set to be released later this year. He said in statement, “After working on new music for the past few years, I am happy to have found the perfect partner in BMG, to help me bring this work to light.” No release date is set for the new album.

In 2020, Julian Lennon appeared on and provided the album cover photo for Be True To Yourself, the latest solo set by Badfinger guitarist Joey Molland. Around the same time, Julian teamed up with Extreme guitarist Nuno Bettencourt for a new cover of Radiohead's “Karma Police.” The clip was featured on AXS TV's At Home And Social With Nuno Bettencourt & Friends special.

In January 2020, Julian Lennon revealed he had a cancerous mole successfully removed from his scalp.

In 2018, Julian inked a deal with Gaumont for his animated book trilogy Touch The Earth to be made into a children's TV series. The second book in the trilogy, Heal The Earth, by Lennon and Bart Davis, was released in 2018. Julian said in a statement announcing the Gaumont deal: “It is an exciting time as we engage in the process of connecting the right creatives to the project who will share the passion for the show’s messages and themes. I am truly enthusiastic about working with Gaumont and appreciate the sensitive energy and insight given the entire Touch The Earth series.”

Julian Lennon helped inspire two of John Lennon and Paul McCartney's most popular Beatles songs — Lennon's “Lucy In The Sky With Diamonds,” which was the title of one of his drawings done in kindergarten; and McCartney's “Hey Jude,” which was originally called “Hey Jules” and written to cheer up Julian after his parents' 1968 separation. Julian appeared only once on one of his dad's recordings, playing drums on “Ya Ya” — the final track off 1974's Walls And Bridges.

Back in February 2014, Julian happily didn't attend the CBS TV special The Night That Changed America: A Grammy Salute To The Beatles — which aired 50 years to the date and hour that group first appeared on The Ed Sullivan Show. Julian, who's focusing primarily on a photographic career these days, explained to Fox411 why he chose to pass on the festivities, explaining, “Listen, I appreciate the Beatles as much as everybody else, but the last thing I wanted to do — because it didn’t look like there was going to be an opportunity to perform, really — was stand in the audience clapping along to other people singing Beatles songs. For me, it would be like a Beatles karaoke night. I’d just feel like a bit of an idiot, and I’ve never been a major fan of awards shows. It’s just not my cup of tea.”

He went on to explain that the Beatles were barely a part of his life while growing up: “I mean, (during the height of Beatlemania) I was three, four, five (years-old). Anyone must remember that dad left when I was three-years-old. Mom and I lived out of the limelight. We lived a totally different life. People seem to forget that. In many respects, as much as I’m tied in (with Beatles history), I am also quite distant from it.”

Julian recently appeared in the new documentary, John & Yoko: Above Us Only Sky, which chronicled the sessions for his father's 1971 Imagine album.

Julian Lennon admitted the fact that he never truly became close with his father still weighs heavily on his mind: “We saw each other on and off. . . I saw him, probably, maybe 10 times before he was killed, y'know? And I think it would have been nice to find some resolve between us eventually, but unfortunately that was never going to be, y'know? So, there will always be that unresolved point in my life, whether I like it or not. Yes, there is forgiveness, but there is still bitterness, and still anger there as well. But, it's not something I think about on a day-to-day basis.”

Just prior to his 1980 death, John Lennon shed light onto his strained relationship with Julian: “With Julian, my first child, I would just tour the world — I'd come home and there'd be a 12-year-old boy (sic) there (who) I had no relationship (with) whatsoever. Now he's 17. I'm gettin' a relationship now, 'cause I can talk about music and whatever he's into and girlfriends and that kind of stuff. But it was a strange child in the house. I'd come back from Australia and he'd be a different size. I wouldn't even recognize the way he looked half the time.”

Although Lennon was missing for most of son Julian life, he was able to provide him with some of the basic skills he would build upon during his own musical career: “He taught me how to play guitar a little bit. Yeah, Dad taught me some of the early, more basic chords of rock n' roll. One thing I would have to say is that I absolutely love and respect him. Not necessarily as a father, but for the work he did and his humanitarian work.”

Julian Lennon hasn't toured since 1999 and told us that he has very specific ideas as to how he wants to make his stage return: “Believe you me, I wanna do live dates but I also wanna make sure the show's right and I also wanna do it in the right way, the way I wanna do it. I wanna work with partial orchestras — y'know, so even though it'll be rock n' roll, a lot of the material that I do do, or have written is very thematic (with a lot of) great orchestration. And I did one show in Hong Kong with a full orchestra and it was the most amazing experience.”

Shortly before her 2015 death at age 75, Cynthia Lennon spoke to us about feeling John's presence through Julian: “The essence of the man is still within my psyche — even though he's not here anymore. And I have a son, who is not the image of his father, but I always joke about the fact that he's me for five days of the week and his father at the weekends. But every time there is an anniversary of John's birthday or his death, Julian and I raise a glass to him.'

In celebration of John Lennon's 80th birthday on October 9th, 2020 his sons, Julian and Sean Lennon, appeared on the BBC Radio special Lennon At 80, and apart from discussing their dad's music, they spoke candidly about their own relationship: “(Julian): Listen, more than anything, I'm just glad that we're here. That you and I love each other and are able to connect and talk so openly about any of this stuff. (Sean): Yeah, me too. (Julian): Um, um, this is, y'know — you are my family. (Sean): I know. The only brother I've got. (Julian): Don't get me cryin' over here (laughter). Next. . . Next subject, please! (Sean): I know. I honestly. . . I, I do worry about crying because sometime when I talk about songs that dad wrote. . . (Julian): Yeah. (Sean): They're just so emotional. They're hard for me to even think about — let alone listen to, some of them. Especially, y'know, the later stuff, just 'cause I have so many memories of them making Double Fantasy and some of that stuff just breaks my heart, because it just. . . it's like a time machine. It takes me right back to those moments. . . (Julian): Yeah. (Sean): . . . which were pretty tough.”