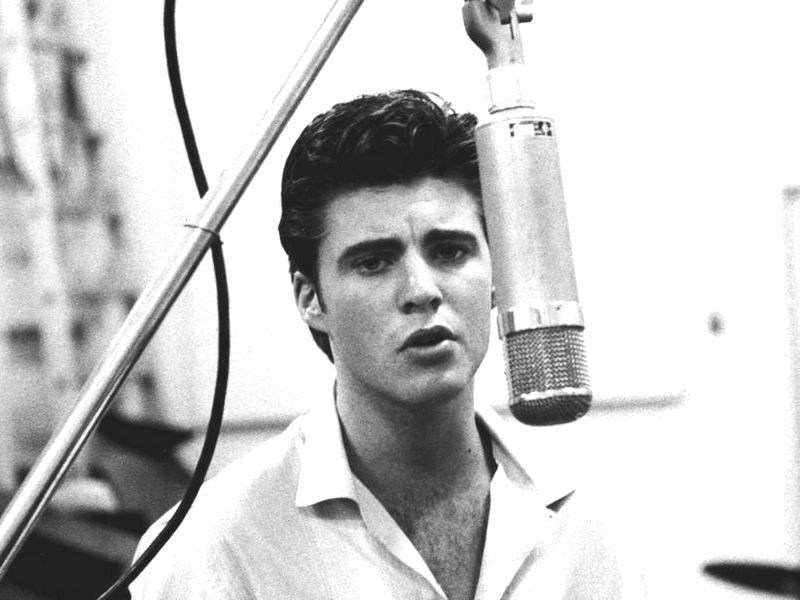 It was 61 years ago today (March 22nd, 1961) that Ricky Nelson recorded “Hello Mary Lou.” The song, which was written by Gene Pitney, was the B-side to Nelson's Number One hit “Travelin' Man,” and was a substantial hit in its own right, peaking at Number Nine on the charts. “Hello Mary Lou,” which was Nelson's 14th Top Ten hit in four years, gained major national exposure when performed on his family's sitcom, The Adventures Of Ozzie & Harriet Show.

Over the years, “Hello Mary Lou” has gone on to become one of Nelson's most covered songs, with versions by Credence Clearwater Revival, Queen, Bobby Lewis, Pete Best, Brownsville Station, the New Riders Of The Purple Sage, and the Seekers, among others.

Ricky Nelson's son, musician Matthew Nelson told us that crew members from the Ozzie & Harriet TV show still talk about his father's frequent musical performances: “It's pretty mesmerizing and I think we meet people all the time that were watching those performances — I mean they hung out, people just hung out to wait to see if he would sing a song. And he didn't sing a song on every episode, but when he did it was a big deal.”

Matthew's twin, Gunnar Nelson explained why he and brother Matthew devote so much energy into keeping their father's legacy alive: “What fuels us in promoting our dad's stuff and what has done it all through the years, man, is honestly, the music has to live. We're not gonna be here forever, but the music's gotta live and the music's gotta be honored. It deserves it.”

Bob Dylan, a lifelong fan of Nelson's, described what he loved about his work in his recent autobiography Bob Dylan: Chronicles Volume One, writing that, “(Nelson) sang his songs calm and steady, like he was in the middle of a storm, men hurling past him. His voice was sort of mysterious and made you fall into a certain mood.”

A companion DVD, titled Ricky Nelson Sings, includes all of his historic show-closing numbers from The Adventures Of Ozzie & Harriet Show together for the first time.

Out now is the expended deluxe edition of Nelson's legendary live album Rick Nelson: In Concert – The Troubadour. The set, which now features a whopping 30 bonus tracks from his 1969 stand at the famed L.A. club, includes such Nelson standards as “Hello Mary Lou,” “Believe What You Say,” “I'm Walkin',” “Travelin' Man,” and “It's Late” — along with covers of Bob Dylan's “She Belongs To Me,” “I Shall be Released,” “If You Gotta Go (Go Now),” and “Tonight I'll Be Stayin' Here With You,” among others.