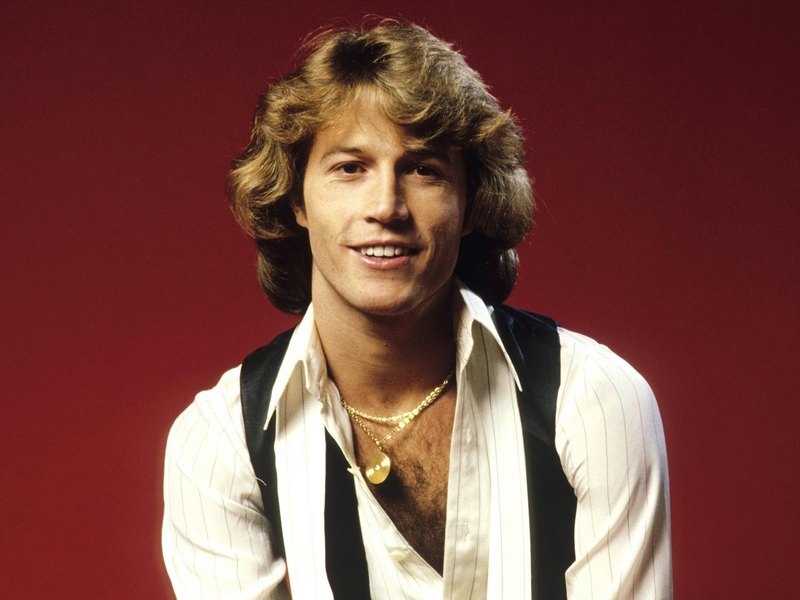 It was 34 years ago today (March 10th, 1988) that Andy Gibb died. Andy, who was the younger brother of the Bee Gees — Barry, Robin and Maurice Gibb — died just five days after his 30th birthday from an inflammatory heart virus exacerbated by years of substance abuse. Andy, who was almost a decade younger than his brothers, had desperately wanted to become part of the group, but because of his age he missed out on the Bee Gees' first era of success in the late-'60s. By the time he was 19, he had emigrated from Australia to be with his brothers, who helped him sign with Robert Stigwood, who managed the group and owned their record label, RSO.

Success for Andy came fast, with his brother Barry's songwriting and producing help. He racked up three Number One hits — “I Just Want To Be Your Everything” in 1977, and “(Love Is) Thicker Than Water” and “Shadow Dancing” in 1978 — all before his 21st birthday.

The long shadow of the Bee Gees was never far from Andy when discovering his own musical success: “I don't honestly think I'd be here now if it wasn't for them, if they hadn't come along first. Well, who knows how it would've worked out? But my brother Barry gave me my first break. He produced my first records — he wrote most of my hits, so, who's to say? If it hadn't been for him first. . .”

Andy Gibb was briefly married to his high school sweetheart, Kim Reeder, and they had a daughter named Peta in 1978. By 1980, Andy, who had previously been romantically linked with Susan George, Marie Osmond, and Olivia Newton-John, became involved with Dallas star Victoria Principal. With his musical career drying up, he turned to TV, serving as the host of the syndicated music show Solid Gold. As his substance abuse problems increased, he began performing such musicals as The Pirates Of Penzance and Joseph And The Technicolor Dreamcoat, but frequent absences due to drug problems ended all his stage runs prematurely.

Victoria Principal recalled realizing that drugs were playing a major role in Andy's life: “Well, it was became very apparent to me that his behavior was becoming erratic and that he was very, very thin. And Andy was a very kind person and a very gentle person, and some of his behavior seemed the antithesis of who I knew him to be. And over a period of (laughs) deduction, I finally realized that it had to be drugs.”

In 1982, once back on track doing the rounds on the comeback trail, Andy publicly blamed his addictions on Principal leaving him — rather than acknowledging the fact that she had left because of his drug use: “I want to tell a story now — I turned to drugs for a month. I did quite. . . an awful lot of cocaine — which I no longer do. I gave up everything. I started missing tapings of Solid Gold — I would not turn up for tapings. A very bad boy. I didn't care. I didn't care about people, I didn't care about life. I thought so much of the girl — and I still do — it just, I just fell apart.”

In the last years of his life, Andy was forced to perform a cabaret act based around Bee Gees hits and was supported almost completely by his brothers.

Singer Marilyn McCoo, who co-starred with Andy on Solid Gold, said that he had a tough time living up to his famous brothers: “Andy was fragile. Andy wanted so desperately to be successful like his brothers. Y'know, he was the youngest brother in the 'Brothers Gibb.' So, when Barry decided to produce him, he ended up having some hits on his own, he was very excited about it.”

In the mid-'80s, after the hits had dried up, Andy was able to take a long hard look at what his brothers had famously termed “First Fame”: “It certainly made me very spoiled. I thought that it was always going to be that way and there would always be those Number One hit records and stuff. Also, I mean, y'know, I'd be foolish to deny it — you suddenly do get an ego and you've got to come back down to Earth and control that. It was a pretty wild roller coaster ride for those two or three years.”

At the time of his death Andy was penniless, living at his brother Robin's estate in England, and had been working on demos for a comeback album to be released in conjunction with the Bee Gees' One album. Tentative plans were in the works for a 1989 Bee Gees/Andy Gibb world tour, after which Gibb would become a permanent member of the Bee Gees — providing he could get clean.

Oldest brother Barry spoke about Andy's death in the 2000 official Bee Gees biography, Tales From The Brothers Gibb, saying, “To me Andy's problems were not drugs and booze — to me they were a massive insecurity, psychological problems, compounded by drink and cocaine. Maybe they also caused it, but at the end of the day (he) had no confidence in himself, yet had a lot of talent. . . he seemed to have lost the will or desire to use it.”

Barry Gibb explained that the severity of Andy's heart condition was kept a secret from his brothers: “We would play tennis and we would play five or six sets and he'd get very, sort of, flushed and red — and I didn't know why, y'know? And what he wasn't telling me was that — he really shouldn't be doing it.”

Marilyn McCoo was aware of the substance abuse problems that had been shadowing Andy prior to his death, but says that she thought he was on the road to recovery: “I did not foresee Andy dying the way he did. I hadn't heard from or about Andy in some time at the time that he passed. He was really getting his life together, it seemed like he was on the path toward self-discovery and peace. And so, it was really tragic to see that happen.”

Barry Gibb recalled his last heartbreaking conversation with his baby brother: “The last thing that happened between me and Andy was an argument, which is devastating for me, because I have to live with that all my life. And there was a phone call between him and me and I was, sort of, saying, 'Yeah, you've really gotta get your act together. . .' and '. . . this is no good.' Instead of being gentle about it — I was angry, because someone had said to me at one point — 'Tough love is the answer,' y'know? So, for me, it wasn't, because that was the last conversation we had. That's my regret. That's what I live with.”

Andy Gibb was survived by his daughter, his brothers, his sister Leslie, and his late-parents Barbara and Hugh.

Barry, who produced the majority of Andy's work, has been working on a box set of his demos, outtakes, and works-in-progress for sometime in the near future.

In 2009 the Bee Gees released the four-disc set called Mythology with Barry and Robin selecting the tracks for their own personal discs, Maurice's wife and two children handpicking the songs for his disc, and the songs for Andy's disc selected by his daughter Peta in her first official role acting on behalf of her father. The collection marks the first time Andy Gibb's work was presented alongside his older brothers' catalogue.

Robin Gibb died of kidney failure at the age of 62 on May 20th, 2012 after battling colon and liver cancer.