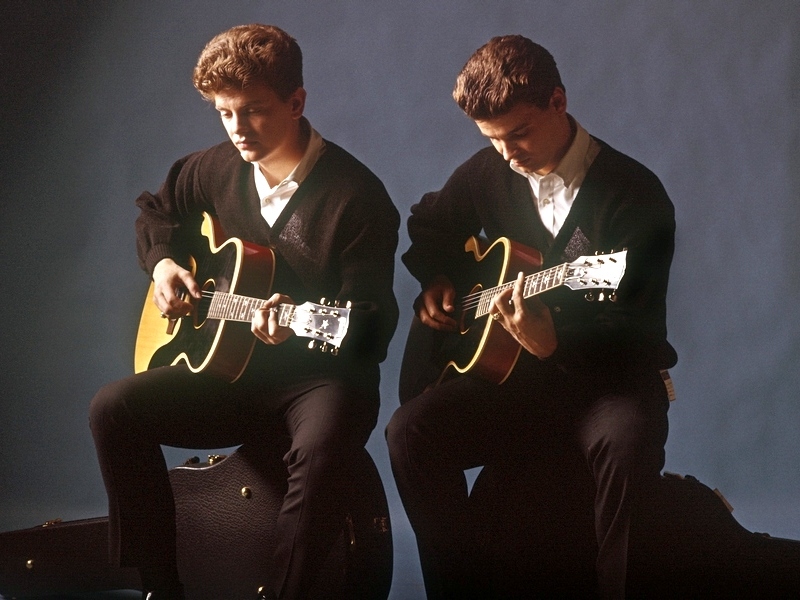 It was 65 years ago today (March 1st, 1957) that the Everly Brothers recorded their first Top 10 hit, “Bye Bye Love.” The song peaked at Number Two later in 1957 and was the first of 26 Top 40 hits the duo would score over the next 10 years. Over the remainder of the decade the Everly's went on to inspire a legion of up and coming rock musicians, including the Beatles, the Hollies, the Rolling Stones, the Who, Bob Dylan, Simon & Garfunkel, the Beach Boys, among countless others.

“By Bye Love” was originally written for Elvis Presley by husband and wife team Felice and Boudleaux Bryant, but he turned it down. The Bryant's went on to write the Everly's greatest 1950s hits, including their first two Number Ones, “Wake Up Little Susie” and “All I Have To Do Is Dream,” and many more classic songs Don and Phil Everly recorded for Cadence Records.

During the sessions for the song, which was produced by Archie Bleyer, Don began strumming the song's distinctive guitar intro in frustration at the brothers' blowing a take. Bleyer realized how great a hook it was and tacked it on to the beginning of the track.

Phil Everly explained that throughout the duo's classic run, there was never a time where the brothers felt as though they could afford to coast or rest on their laurels: “You have to know the times, and the times in the late-'50s, it still was, y'know, people were anti-hair, y'know, anti long hair, they were anti-rock n' roll, so there wasn't any — 'Wow, this is a plateau that you can depend on.' It was more like, 'We gotta do something — the next thing.' It was really more constant 'next' to maintain.”

Over the years, “Bye Bye Love” has been covered by such acts as Simon & Garfunkel, Ray Charles, George Harrison — and was briefly tackled by the Beatles during their January 1969 Let It Be sessions.

Keith Richards, an Everly Brothers diehard, spoke about the creators of the Everly's biggest early hits, the Nashville songwriting couple Felice Bryant and Boudleaux Bryant: “I can never think of the Everly Brothers, knowing what I know now. . . and songwriting, that there are actually four people involved. And the other two was Felice Bryant and Boudleaux Bryant, who wrote all of those beautifully written songs. And so well suited to the boys' voices.”

During Simon & Garfunkel's 2003-2004 Old Friends reunion tour, Don & Phil were the duo's special guests and performed a nightly mini-set with Simon & Garfunkel, which Art Garfunkel felt showcased the sound of each duo coming full circle: “The Everlys were one of a select bunch of possibilities, and I responded strongly to that. And we reached out for them, knowing that they've somewhat retired, and they said 'yes.' So that's how it happened. It's a nice mixture of pink and red, the Everlys and Simon & Gar — magenta and fuchsia.”

Phil Everly died on January 3rd, 2014 in Burbank, California from chronic obstructive pulmonary disease — a combination of emphysema and bronchitis. Everly, who was a longtime smoker, was 74.

Don Everly died on August 21, 2021 in a Nashville hospital. He was 84. A family spokesperson did not cite the cause of death, however, he has been in bad health for some time.