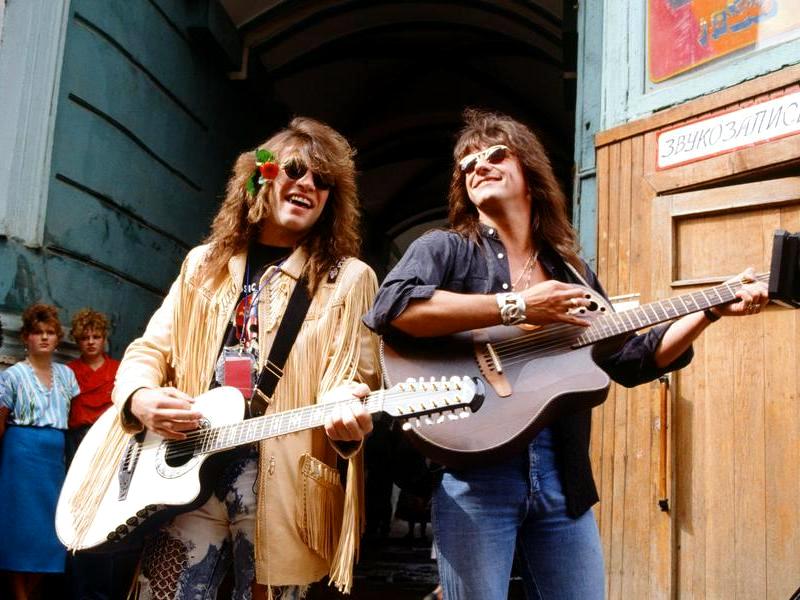 It was 35 years ago today (February 14th, 1987) that Bon Jovi's “Livin' On A Prayer” began its four-week run on top of the Billboard Hot 100. The song was first released the previous August on the band's third album, Slippery When Wet, serving as the set's second single following the chart-topping “You Give Love A Bad Name.” “Livin On A Prayer” toppled Madonna's then sixth-Number One hit, “Open Your Heart” after only one week on top of the Hot 100.

Upon its initial release, “Livin' On A Prayer” sold a whopping 800,000 copies the U.S. alone and in 2013 was officially certified triple platinum. A tally in June 2020 saw the video racking in over 600 million YouTube views.

Jon Bon Jovi co-wrote the tune with bandmate Richie Sambora and noted songwriter Desmond Child — and maintains its success took him by surprise. In recent interview with The Irish Times, he said, “That song, God bless it. But, my God, who knew? Not us, I can assure you. It was created on a day when none of us had any ideas. We just had a conversation, and it came out of that. I’m sure happy my name’s on it!”

He went on to recall, “I remember walking out of the room with Richie and I said, 'Eh, it’s okay. Maybe we should just put it on a movie soundtrack.' Richie looked at me and said, 'You’re an idiot. It’s really good.' I said, 'I just don’t know where it’s going.' But it didn’t have that boom-boom-boom bassline yet, so it sounded more like the Clash.”

Back in 2019 during his “Runaway To Paradise” fan cruises onboard the Norwegian Pearl, Bon Jovi took part in Q&A and shed light on his decision to stay with the song — rather than act on his initial instincts: “Ultimately, the song was so unique. It didn’t sound like anything. Y'know, 'Runaway' had eight notes, like a lot of songs on the radio at the time. Even '(You Give Love A) Bad Name' was reminiscent of other songs that were on the radio. 'Livin' On A Prayer' didn’t sound like anything. So, I was sort of indifferent. I thought, 'Well, it’s different, but is it a rock song? Is it us?' Granted, we wrote it on acoustic guitars, so there was no drum beat or anything. There was no bass line.”

Richie Sambora explained to us why “Livin' On A Prayer” is probably one of the most durable and universal songs he ever co-wrote with Bon Jovi and Desmond Child: “All of us have been in a situation where, y'know, you've been kind of like on the balls of your butt and you don't know what's going to happen. Either it's your girlfriend, or your parents, or your friend, or your dog — or somebody kind of helps you along. Y'know, we've all been 'Tommy and Gina' — the two characters that Jon and I and Desmond created in that particular song.”

Although Bon Jovi's 1986 breakthrough album Slippery When Wet and its 1988 followup New Jersey were commemorated with deluxe editions — Jon Bon Jovi told us he's never been comfortable going down that road — be it either box set editions or playing full albums in concert: “Yeah, that came and went with Slippery (When Wet) and I don't need that kind of stuff. Y'know, I've always just remained in the moment and I don't really get caught up in that. I don't know why; maybe it's just because we continued to remain current as we do that I don't need to repackage something in. . . I don't know. I just don't really get caught up in it.”