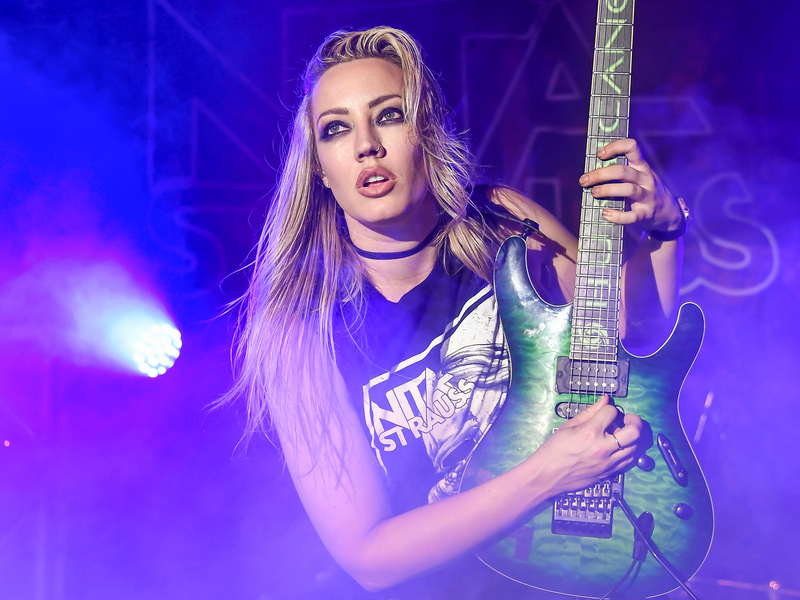 Nita Strauss, the Alice Cooper band's guitarist, is getting ready to release her sophomore solo project and on it she sings, something she says she never thought she'd do. But don't think that means she'll be fronting a band anytime soon. Strauss told Metal Edge magazine's “Another FN Podcast With Izzy Presley,” “Absolutely not. Because I want people to like it. I'm not a very good singer. Why am I gonna sing when I know I'm not that good? . . . I'll play the guitar.”

Strauss admitted that she initially never considered adding vocals to a solo project. She explained, “Honestly, I didn't really imagine it happening it at all. I wasn't planning on ever doing a solo record that wasn't an instrumental shred thing . . . I wanted to kind of stay true to my identity as a guitar player and just make guitar music. But then, as I grew a little bit as a songwriter, it just made sense to sort of evolve a little bit more musically and branch out and try different things, get in front of a new audience — obviously, a much larger audience than I would have ever just doing instrumental guitar music. And it's fun. It's not necessarily what I initially thought I would do when I set out as a solo artist, but I'm learning so much, I'm having such a great time. We're now getting added to these big festivals and getting bigger tour offers and stuff, so it's a fun journey to be on, for sure.”

Strauss' new album release date has not been announced.