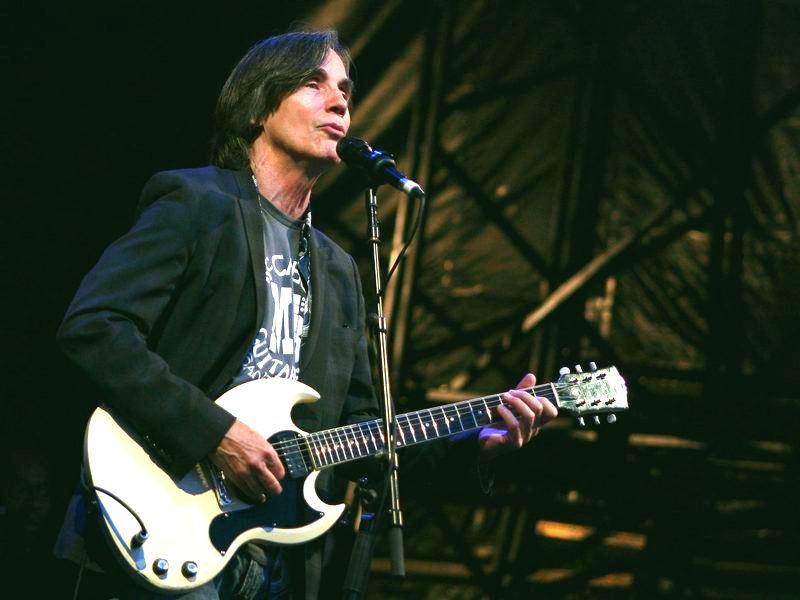 Jackson Browne took time out to recall his most successful collaboration — the Eagles' 1971 signature tune “Take It Easy.” While chatting with Record Collector, he looked back at his days living under Glenn Frey and J.D. Souther in a basement apartment in L.A.'s Echo Park. Browne remembered when the stars aligned on a song he had left incomplete: “Glenn finished 'Take It Easy' for me because I’d got stuck and bored with it. He’d heard it countless times through the floorboards, and he said, 'Let me add something' so he came up with the line, 'There’s a girl, my Lord, in a flatbed Ford, slowing down to take a look at me.'”

He went on to say, “Glenn’s culminating line was perfect. He knew how to sum things up. He grabbed that line like Roy Orbison did on '(Oh) Pretty Woman': 'But wait. What do I see? Is she walking back to me? Yeah, she’s walking back to me.' He was a big Orbison fan, and he made my song universal when I’d have probably come up with something lame about an Indian standing on the corner. I wanted it to be a guy, but he went up the middle and made it about him. Now when audiences sing it, they picture themselves. The girls are in that truck and the guys can’t wait to hop in. It’s so teenage, it’s f***ing wonderful.”

Browne, who reportedly earned $1 million in royalties for “Take It Easy” by 1973, went on to co-write “Doolin’ Dalton” for the Eagles' 1973 set Desperado album, and then co-wrote “James Dean” for 1974's On The Border collection.

“Take It Easy” still remains a highlight of all of Jackson Browne's shows. We asked him if after being so close to the band he ever secretly wished he'd been asked to join: “I could have wished to have been in the Eagles many a time, but I never had the skills to be in a band like that; neither as a singer or probably as a player, y’know? They worked real hard, they made a lot of music. I think they worked like the Beatles worked: four pieces, y’know four pieces playing all the parts, singing all the parts. And they all brought incredible experience — I mean, Glenn had played with Bob Seger, Bernie (Leadon) had been, y’know, played with the (Flying) Burrito Brothers, Randy Meisner had played with a bunch of bands, I saw him play in L.A. — also (with) Rick Nelson, and (Don) Henley had been in a group called Shilo and they came to L.A. — and that’s how they knew him, I guess — because, they were on Jimmy Bowen’s record label. They all came from their own musical backgrounds and when they came together, they coalesced in a way that was pretty hard to top.”

Jackson Browne will next perform with James Taylor on April 21st in St. John's, NL at the Mile One Centre.