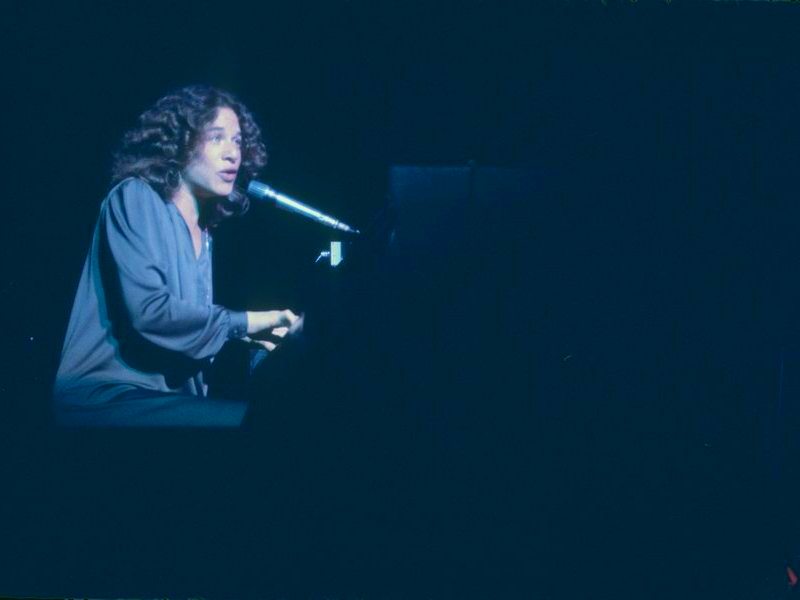 Happy Birthday to Grammy-winning singer-songwriter Carole King, who turns 80 today (February 9th)!!! Most fans associate King with her own hits, such as 1971's “It's Too Late,” “I Feel The Earth Move,” and “So Far Away,” plus 1974's “Jazzman,” but in the 1960's King was responsible for co-writing with her then-husband Gerry Goffin some of the biggest hits to come out of that decade.

On October 30th, 2021 Carole King was inducted into the Rock and Roll Hall of Fame as a performer. She had previously been inducted as a songwriter with Gerry Goffin back in 1990 isn the “non-performer” category. Taylor Swift did the honors for King at the 2021 ceremony.

Back in January, a new documentary on James Taylor and Carole King premiered on CNN, titled Carole King & James Taylor: Just Call Out My Name. The documentary focused on the duo’s 2010 world tour, dubbed the “Troubadour Reunion Tour.” The press release stated, “The title referred to their having played together at West Hollywood's famed Troubadour club when they were starting out in 1970, and a subsequent six-night stand they did there in 2007 to celebrate the nightspot’s 50th anniversary, which that led to their taking it on the road to global arenas three years later.”

2019 saw the release of Carole King – Live At Montreux 1973. The show, which had never before been released, features King performing her first-ever overseas concert at the world-famous Montreux Jazz Festival, while on the road in support of her then-recent Fantasy album.

Highlights on Carole King – Live At Montreux 1973 are “I Feel the Earth Move,” “Smackwater Jack,” “Beautiful,” “Up On The Roof,” “It’s Too Late” — along with solo piano versions of “You’ve Got A Friend,” and “(You Make Me Feel Like A) Natural Woman.”

On January 12th, 2019, Carole King made a surprise appearance during the fifth anniversary performance of the Broadway musical based on her life, Beautiful: The Carole King Musical, which ran at Manhattan's Steven Sondheim Theatre. During the second to last number of the Tony and Grammy Award-winning show, instead of actress Chilina Kennedy performing the musical's title song recreating King's 1971 Carnegie Hall concert, King herself surprised the crowd by performing it herself. She stayed on with the cast to sing the encore of “I Feel The Earth Move” and afterwards addressed the crowd, saying, “What a night! It was amazing to be a part of this. This musical has been such a magical experience. To be here and celebrate our fifth anniversary with so much joy and love is amazing.”

Beautiful is based on King's life, starting with her marriage and songwriting partnership to the late-Gerry Goffin, and her ascent into superstardom with the release of her 1971 classic Tapestry.

The Broadway production of Beautiful closed on October 27th, 2019 after 60 previews and 2,418 regular performances, marking the show the 27th longest-running musical in Broadway history.

Beautiful: The Carole King Musical is also headed to the big screen. The movie will be written by Douglas McGrath — who wrote the musical’s book — and Tom Hanks will serve as co-producer. No release date has been announced. Beautiful opened on the “Great White Way” in January 2014 at the Stephen Sondheim Theatre, and was nominated for seven Tony Awards — including Best Musical, with actress Jessie Mueller snagging the prize for Best Performance by an Actress in a Leading Role.

In July 2017, Carole King performed her 1971 multi-platinum masterpiece, Tapestry, in its entirety for the first time at London's British Summer Time in Hyde Park. A CD/DVD set of the show was released as Tapestry: Live In Hyde Park. Also in 2017, King shared a new version of her 1982 song “One Small Voice,” in protest of President Trump's policies. She said in a statement: “I’m making the updated recording of ‘One Small Voice’ available to everyone because it will take the strength and persistence of many small voices to overcome the lies of the loudest voice with our message of truth, dignity, and decency.” The song comes courtesy of a music video featuring stills from the Women’s March in Stanley, Idaho, in which King participated.

In 2010, Carole King and James Taylor released the live package Live At The Troubadour. The disc was recorded on November 28th, 29th, and 30th, 2007 at L.A.'s legendary Troubadour club in celebration of the venue's 50th anniversary.

Among the many Goffin/King-penned hits were the Number One records “Will You Love Me Tomorrow,” recorded by the Shirelles in 1960; “Take Good Care Of My Baby,” recorded by Bobby Vee in 1961; and “The Loco-Motion,” recorded by Little Eva in 1962 and Grand Funk Railroad in 1974, when it again reached Number One. Other Goffin/King songs included “Up On The Roof” by the Drifters, “Chains,” recorded by the Cookies and the Beatles, “One Fine Day” by the Chiffons, “Pleasant Valley Sunday” by the Monkees, “I'm Into Something Good” by Herman's Hermits, “Goin' Back” by the Byrds, “Don't Bring Me Down” by the Animals, “Go Away Little Girl” by Donny Osmond, and “(You Make Me Feel) Like A Natural Woman” by Aretha Franklin.

In 1971 James Taylor scored his only Number One hit to date with a cover of King's “You've Got A Friend.” Taylor explained that he and King almost immediately recognized a kindred spirit in one another: “It turned out we spoke the same language. We sat down and we slipped back into the mother tongue, really. It was great. We played on each other's records; we just had a common mind, y'know?”

In 1997, fellow singer-songwriter Billy Joel covered the Goffin/King song “Hey Girl” for his album Greatest Hits Volume 3. Joel spoke of his life-long respect for King: “Now, Carole King — there's got to be some carving of her on Mount Rushmore. I mean, this woman has written so much music in the pantheon of popular music . . . I don't think people know how much this woman did! How she changed the face of popular music. . . The Beatles, I believe, were trying to emulate Goffin and King. I know that Lennon and McCartney wanted to be the next Goffin and King.”

Micky Dolenz, who was a recipient of several Goffin/King classics during his time in the Monkees released a 2010 tribute disc to King, titled, King For A Day. We asked Micky if after recording the album he could pick a single favorite Carole King tune: “That's a good question. I don't think so. I mean she wrote so many different types of tunes. Things like 'Cryin' In The Rain' to 'Don't Bring Me Down' to 'Up On The Roof' — I mean the spectrum is as wide as you can possibly get. When we started going through her catalogue, her list of songs — we were going down this list going, 'She wrote that?! (Laughs)”

In 1999, King's landmark 1971 album Tapestry received a prestigious Diamond Award from the RIAA (Recording Industry Association of America), signifying sales of over 10 million units. It has now reached over 13 million in the U.S. alone.

Tapestry was re-released in 2008 in an expanded 35th anniversary edition. The reissue includes a bonus disc featuring live performances of the entire album in its exact running order from 1973 and 1976 recorded in Boston, Columbia, Maryland, New York's Central Park and the San Francisco Opera House.

In December 2001, King was honored with a Heroes Award by the New York chapter of the Recording Academy. King was asked about her long-term plans: “Hopefully, continue to do the job I do, which is to write and record music and continue to inspire people with my work and my life and do the things I love to do and if I can do that, I'll be happy.”

In 2007 King re-released her live album from her extended Living Room tour, which featured unplugged versions of most of her best-known songs.

In 2011 writer/director John Sayles signed on to adapt Girls Like Us: The Story Of Carly Simon, Joni Mitchell And Carole King into an upcoming major motion picture for Sony Pictures. The 2008 book wowed critics for it's in-depth study of the women's careers and placement in the singer-songwriter movement. The picture will be directed by Katie Jacobs, best known for her work on Fox's House. No shoot date has been announced.

King released her first Christmas album in 2011, called A Holiday Carole. The set, which was produced by her daughter Louise Goffin, includes such standards as “Sleigh Ride,” “Have Yourself A Merry Little Christmas,” “Do You Hear What I Hear,” among others — including King's tip of the hat to her own Jewish faith, with “Chanukah Prayer.”