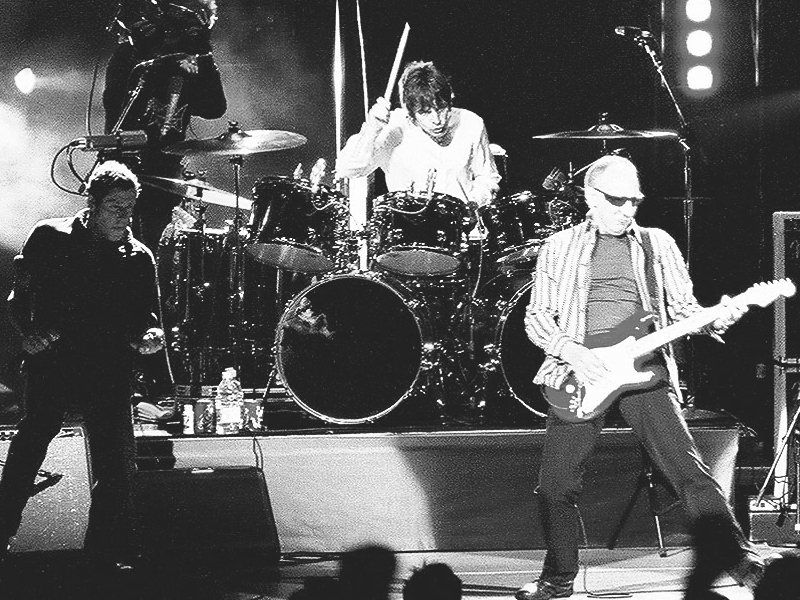 The Who Announces 2022 Tour

The Who are heading back on the road and have rolled out a two-leg, 29-date North American tour. The spring run kicks off on April 22nd at Ft. Lauderdale, Florida's Hard Rock Live and wraps on May 28th at Bethel, New York's Bethel Woods Center of the Arts — which sits on the site of the band's legendary 1969 Woodstock appearance.

The fall leg launches on October 2nd at Toronto's Scotiabank Arena and winds down over two nights — November 4th and 5th — at Las Vegas' Dolby Live.

In addition to Roger Daltrey, Pete Townshend and the local orchestra backing them at every gig, the Who's 2022 lineup features longtime touring members Zak Starkey on drums and Pete Townshend's younger brother, Simon Townshend on rhythm guitar. Rounding out the band are Who and Daltrey veterans Loren Gold on keyboards and bassist Jon Button. Also returning is longtime Who associate and background vocalist Billy Nicholls, orchestra conductor Keith Levenson, lead violinist Katie Jacoby, and lead cellist Audrey Snyder. Joining the group this time out will be additional keyboardist Emily Marshall.

Pete Townshend spoke about the benefits of touring with an full symphony orchestra, admitting to Rolling Stone, "It gives me a chance to make sure what I play, what I do, where I look, how I behave on the stage, is more connected with the people around me. and with the audience, and with, to get prosaic about it, an inner sense. In other words. I don’t lose myself the way I did when I used to jump around, have a big adrenaline rush, and then come off the stage and someone would say, 'Great show,' or someone would say, 'Terrible show,' and I wouldn’t really know what I had done, to be honest, since I was like someone running a marathon. So the orchestra gives me space."

Among the most notable city's on the itinerary is Cincinnati, Ohio — a show that will mark the Who's first visit to the city since the band's tragic 1979 show at Riverfront Coliseum, which left 11 fans dead in a pre-show stampede: "At last, we can close the loop on the disaster that happened back in 1979. We’ve done a lot of work on that. There’s been a documentary (The Who: The Night That Changed Rock) about it. This has been in the air for a while."

Over 55 years after officially becoming "The Who," Pete Townshend told us he remains amazed at how massive a crowd he and Roger Daltrey can command simply by performing under the band's moniker: ["It's so strange to have that brand that is bigger than either of us. That when we get together under that banner that attracts an audience that is not just old fans — it's curious young people, people who are interested in our legacy and where we fit into the history of Western music — and Western sociology."] SOUNDCUE (:21 OC: . . . and Western sociology)

Roger Daltrey, who's spent more time onstage over the past decade than he did in the 1980's or '90s combined, told us that playing live has little to do with a performer's age and everything to do with their soul: ["I've always laughed at people who say, 'Oh, you're too old to rock n' roll.' I don't. . . To me, it's got nothing to do with your age or any of that. It's to do with the music and what that music itself generates."] SOUNDCUE (:12 OC: . . . music itself generates)

The Who will play in each city with a local orchestra, the dynamics of which Pete Townshend believes only strengthens how the band plays — as well as how Roger Daltrey's sings: ["Roger has said that he doesn't know how much longer he can sing the way he's singing. He's singing incredibly well and has been for the last five or six years. I mean, better than ever, I think. But he has said he doesn't know how long he can go on doing that — and maybe, doing this orchestral-style tour, because the dynamic is so much wider — in other words, he doesn't have to battle with a noisy rock band in order to get himself heard, and to hear himself. It might open up some avenues for us, I don't know."] SOUNDCUE (:29 OC: . . . I don't know)

JUST ANNOUNCED: The Who tour dates (subject to change):