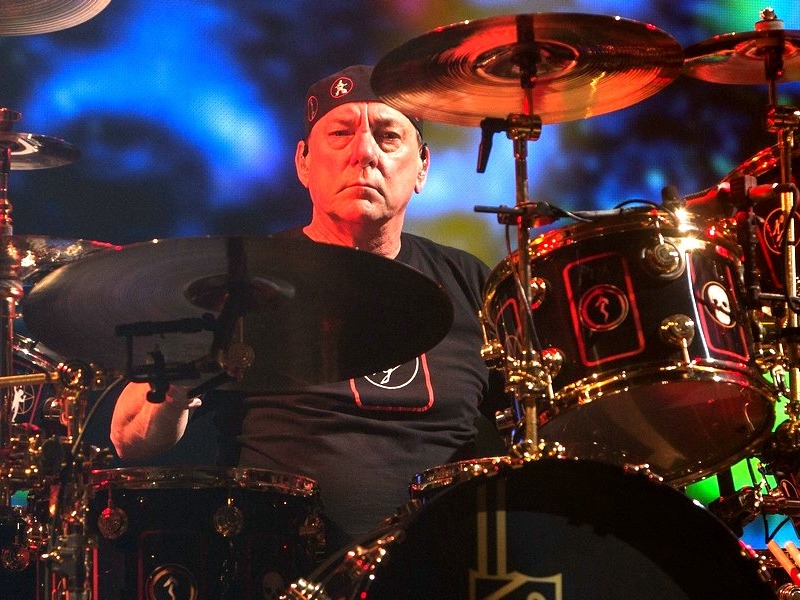 It was two years ago today (January 7th, 2020) that Rush drummer Neil Peart, one of the most groundbreaking and virtuosic drummers in rock, died at the age of 67 in Santa Monica, California, where he lived.

Peart's cause of death was brain cancer, from which he had suffered for the previous three years.

In a statement released after Peart's death, Rush bassist Geddy Lee and guitarist Alex Lifeson called Peart their “friend, soul brother and bandmate over 45 years,” and said he had been “incredibly brave” in his battle with glioblastoma, an aggressive form of brain cancer. They added, “We ask that friends, fans, and media alike understandably respect the family’s need for privacy and peace at this extremely painful and difficult time. Those wishing to express their condolences can choose a cancer research group or charity of their choice and make a donation in Neil Peart’s name. Rest in peace, brother.”

Legendary for his drum solos during Rush's concerts, Peart retired from performing after Rush played its final show on August 1st, 2015 in Los Angeles. Peart was an immensely private person, so the fact that he had been battling brain cancer was not publicly known.

Peart is survived by his wife, Carrie Nuttal, and their daughter Olivia. Peart and Nuttal were married in 2000. His common-law wife of 23 years, Jackie, died of cancer in 1998 — less than a year after their 19-year-old daughter Selena was killed in a car crash in August 1997.

Kast year saw the publication of Neil Peart: The Illustrated Quotes. The book “is the first and only Neil Peart quotes collection authorized by Neil himself. . . and also serves as a love letter to Peart and his beautifully-crafted words that have inspired and influenced millions around the world.”

The press release for publisher Simon & Schuster's Peart collection reads in part: “As the drummer and primary lyricist for the multi-platinum selling rock band, Rush, Neil charmed the world with his introspective and eclectic writing. Heavily inspired by science fiction, fantasy, philosophy, and his many cross-country trips on his motorcycle, Neil crafted universal lyrics that encapsulated the social and humanitarian issues of the time.”

A while back, Neil Peart, who in addition to drumming duties, wrote all of Rush's lyrics, told us that traveling the country on his bike and interacting with people off the beaten path has affected his work as both an author and a lyricist: “I'm writing through watching, y'know, farm workers working in the fields, and watching people working in gas stations and in, in small-town restaurants, and all that. And those people become part of the world, and part of the human nature that I'm writing about. And I think that has to help, and definitely does help into giving me a much more real perspective on life as it is lived, you know, on an everyday basis for more people.”

Mike Portnoy, the co-founding former drummer of Dream Theater reveled that he was among the few that was aware of Neil Peart's cancer diagnosis: “Being part of the inner-circle, I've been aware for, about, the last two years, or so. And, y'know, obviously, I haven't talked about it, and y'know, respected his privacy and his family's privacy. So, even though I knew this could possibly be an inevitability for the past couple of years, it's still shocking now that it's actually here. It's just, you never imagined a world without Neil, Geddy, and Alex all walking along it, y'know?”

Portnoy, who revered him as a drummer, told us that one cannot overstate the range of Neil Peart's talents: “I mean, the fact that he was the band's lyricist and wrote such intelligent poetic lyrics — it was a huge, huge influence, as well — as well as the books he's written over the past 20 years or so. After the horrible tragedy of losing his first wife and daughter, he wrote the Ghost Rider (Travels On The Healing Road) book, which is one of the most inspirational books I've ever read in my life.”

Triumph drummer Gil Moore, a fellow Canadian who made his bones on the North American concert circuit the same time as Rush, explained how Neil Peart carried on the tradition of aggressive lead drumming, which he learned from his heroes: “When I think of Neil's playing style, the first guy I think of is Ginger Baker, Keith Moon, Mitch Mitchell. Neil's style, which is, sort of, a very drummer take all — he plays the heck out of everything on his drums, right? So, opposed, to say, the guys that evolved from the Alan Jackson, Levon Helm, John Bonham-school and, kind of, lay back between the waits on these spaces; the Keith Moon's and the Neil Peart's, and the Ginger Baker's, and the Mitch Mitchell's — they were the guys that went the reverse route, and they filled all over the place, and kind of, drove the rhythm from in font of it, rather than sitting behind it.”

Judas Priest drummer Scott Travis was an instant fan of Neil Peart, and actually met him as a teenager before a gig on Rush's tour behind 1978's Hemispheres: “I didn't know the man — I obviously knew him as a phenomenal drummer and songwriter and everything else, but I actually respected the fact that he was, kind of, invisible and he wanted his personal life to stay separate from his music life. 'Cause, as we know nowadays everybody wants everything about them to be known, and documented and filmed — and he, of course, was the antithesis of that. So, I respected that a lot about him. This was, of course, long after he had influenced me as a drummer and just changed my world, as far as drumming.”

Kenny Aronoff, best known for his years drumming for John Fogerty and John Mellencamp, told us that news of Neil Peart's death transcended the music community: “You never know how people will react to somebody dying until they die. With Neil, it didn't surprise me, but Neil passing really affected drummers and the music industry and people in general. My brother's a psychoanalyst and he knew who Neil Peart and Rush was and felt bad. I mean, Neil's passing affected so many different types of people in and out of the music business. It didn't surprise me — but, pretty amazing.”