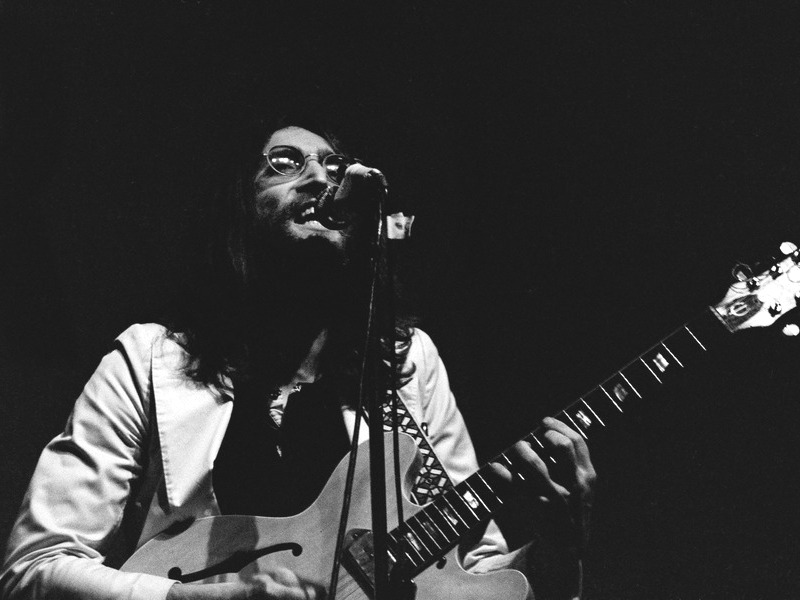 It was 51 years ago today (December 15th, 1969) that John Lennon and Yoko Ono assembled their legendary Plastic Ono Supergroup for a historic performance at London's Lyceum Ballroom. The event was part of UNICEF's Peace For Christmas concert, which featured a number of other performers including the Hot Chocolate Band, Jimmy Cliff, and the Rascals, among others.

Lennon's backing band featured George Harrison — marking the final time the pair ever shared a stage together — Eric Clapton, Keith Moon, bassist Klaus Voormann, Lennon's primary drummer at the time — and future Yes sticksman Alan White, Billy Preston, Delaney & Bonnie and their backing band — which included drummer Jim Gordon, keyboardist Bobby Whitlock, and bassist Carl Radle — who the next year would for Derek & The Dominoes with Clapton — and horn players Jim Price and Bobby Keys who would soon move on to greener pastures as part of the Rolling Stones' touring band.

Lennon led the ensemble through his and Yoko's current single — “Cold Turkey” which was extended to nearly seven minutes. The band also performed Yoko's B-side “Don't Worry Kyoko (Mummy's Only Looking For Her Hand In The Snow) which topped out at over 15 minutes.

Drummer Alan White remembers the evening's performance taking a turn for the bizarre once Keith Moon joined him onstage: “Keith Moon came in very close to the end of the jam. Got on stage and started beatin' — literally almost trying to break one of my drums on the side — the 16-inch tom. He was hittin' it and he had that look in his eyes, like he was a crazy man. So, it was just getting really hilarious.”

Despite Yoko's musical abilities being slammed at the time, Lennon later said that her performance that night at the Lyceum went on to help inspire the next decade's punk movement. Yoko admits that she never understood why critics always attacked her work with such vitriol: “I would say, 'What's your problem?! What's your problem about me?!' Y'know, that was the problem that I had from the beginning, so it's not a new feeling.”

The entire performance was recorded on both four-track soundboard tapes and two-track audience tapes, which was mixed in for ambiance. Although Lennon had wanted to release the performance soon after the show, the tapes were saved for the Live Jam bonus disc of the couple's 1972 double album set Some Time In New York City.

Panic! At The Disco Drops 'Don't Let The Light Go Out'