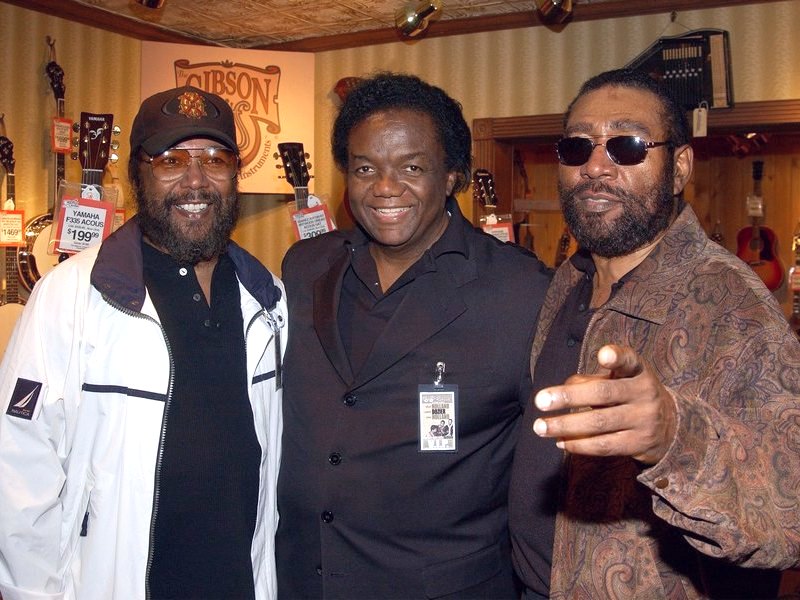 Happy Birthday to Motown songwriter Eddie Holland, who turns 82 on Saturday (October 30th)!!! Holland, his younger brother Brian Holland, and Lamont Dozier — better known as “Holland-Dozier-Holland” — are responsible for writing and producing such Motown classics as Marvin Gaye's “How Sweet It Is”; the Four Tops' “Baby I Need Your Loving,” “Standing In The Shadows Of Love,” “Bernadette,” “It's The Same Old Song,” “I Can't Help Myself,” and “Reach Out (I'll Be There)”; Martha & the Vandellas' “Nowhere To Run,” “Heatwave” and “Jimmy Mack”; and the Supremes' Number One hits “Where Did Our Love Go,” “Baby Love,” “Stop! In The Name Of Love,” “Come See About Me,” “Back In My Arms Again,” “I Hear A Symphony,” “You Can't Hurry Love,” “You Keep Me Hangin' On,” “Love Is Here And Now You're Gone,” and “The Happening.”

After leaving Motown in 1967, the team continued on with such hits as “Give Me Just A Little More Time” for Chairmen Of The Board, among others.

The Holland-Dozier-Holland team wrote many hits for the Four Tops. Holland said that “Baby I Need Your Loving” was a surprise hit for the group: “'Baby I Need Your Loving' was a song that sort of fell on the outside. It was just lying around a couple years. And the Four Tops came by, Mickey Stevenson, an A&R director, yes, he said, 'We got anything for the Four Tops?' And we said, 'Yeah, we got this one song, I mean, may be pretty good.' I didn't look at it as anything exceptional. It was nice, it was a nice tune, it was a hit, but I didn't look at it as anything earthshaking. And we did that and it became great. Matter of fact BMI has it as our best-selling record.”

Eddie Holland remembers that writing the lyrics to Holland-Dozier-Holland's Motown classics was a solitary experience: “With those melodies that Lamont and Brian was coming out with, I mean, man! Norman Whitfield used to tease me. They'd say, 'When he's in Detroit on Lumpkin Street living up there over his grandmother in those attic rooms, and he never comes out, and all they do is open a little door and shove a little food and water in there for him' (laughter) — because I, I would hibernate.”

Holland credits Motown founder Berry Gordy Jr. for empowering his staff producers and allowing them the room to find the perfect combination between their songs and the label's talent: “First of all, you could get a crack at anybody there. That's the way that the company was set up. Whoever was there, if they was signed to that label, I don't care who you are — you could get a crack at them. And the way . . . This is the beauty of the company, which I think led to the success of the organization, is that they weren't allowed to refuse anything. Their job was, 'Hey, you're here to sing, that's the producer signed to this company — you sing when he tells you to sing.' Any other problems, you had a problem with him.”

Another Holland-Dozier-Holland hit for The Four Tops was the song “Bernadette.” Holland says he clearly remembers how the song was written: “Brian was at the piano once. This was in a basement, I can visualize it just like it was yesterday. Lamont hadn't walked in quite yet. And Brian was playing this melody. He started singing 'Bernadette.' I said to myself 'Bernadette? I hope he's not serious.' I didn't say anything. And so he played more of the melody and Lamont came in and he sort of liked what Brian was doing. But, I tell you, that was a tough one. I really, truly did not want to write something about a Bernadette.”

Holland-Dozier-Holland composed the score for the recent musical version of The First Wives Club, which was written and directed by Rupert Holmes of “Escape (The Pina Colada)” song fame. The play wrapped its run in 2015 at the Oriental in Chicago, with the producers eying an upcoming Broadway run.