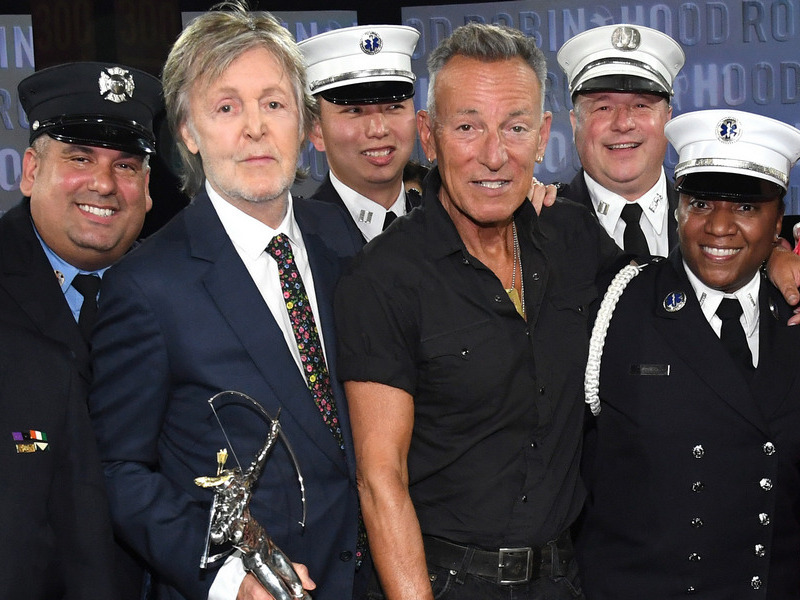 Wednesday night's (October 20th) Robin Hood Foundation benefit at New York’s Javits Center raised a whopping $77.5 million, according to Rolling Stone. Paul McCartney received a special award for his work back in 2001 in putting together The Concert For New York City at Madison Square Garden and was among a who's who of notables attending the event.

The fundraiser, hosted by host Saturday Night Live's Cecily Strong featured performances by Bruce Springsteen, Alicia Keys — who performed “Let It Be,” and the Jonas Brothers.

Springsteen, who performed an acoustic mini-set addressed the 3,000-strong crowd by saying: “Good evening, everybody. How are those appetizers out there? Is anyone f***in’ alive out there? Is anyone f***in’ alive?” “The Boss” then went on to play a pair of Born In The USA classics — “Working On The Highway” and “Dancing In The Dark” before closing with “Thunder Road.” On a more serious note, Springsteen explained, “For over 30 years, Robin Hood has been finding, fueling, creating, impactful solutions to lift families out of poverty here in New York City. The funds raised tonight translate into real results for New Yorkers living in poverty. We appreciate your support.”

Paul McCartney told the crowd, “I love New York. Many years ago, when I was a little kid in Liverpool, we saw New York in the movies. I never dreamed that I would be here getting an award like this from you fantastic people. But then years later, we did show up at JFK with my buddies, the Beatles. We went on The Ed Sullivan Show and, boy, that was something.”

McCartney went on to joke: “It is fantastic that Robin Hood helps people in need. In fact, the other day we were going through the city and this guy comes up. He’s got no shoes on, he’s got grey hair, a scraggly beard. I said hi to him. I found out later it was Rick Rubin.”