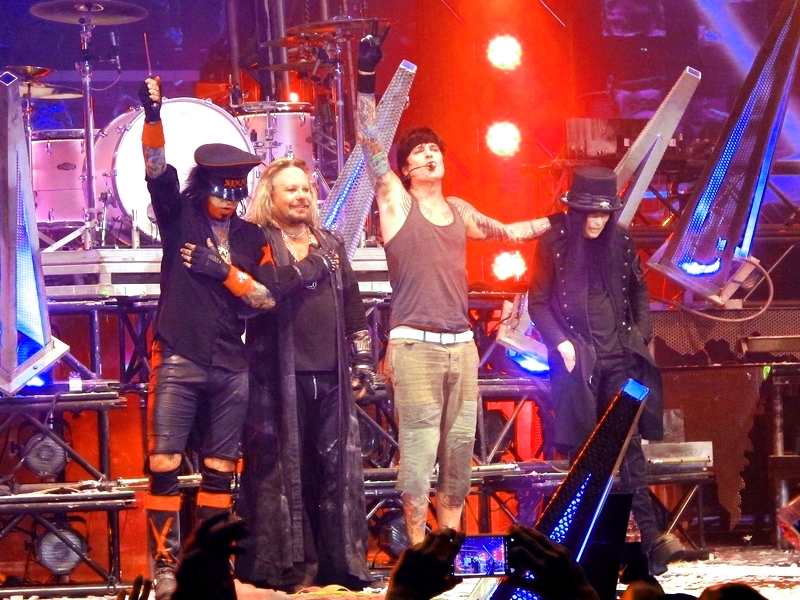 Mötley Crüe bassist Nikki Sixx feels that delaying the band's massive “Stadium Tour” was the best decision for both the bands and their fans. The 30-date “Stadium Tour” kicks off on June 16th, 2022 at Atlanta's SunTrust Park and marks the Crüe's first live dates since its 2014 / 2015 farewell tour.

While chatting with Yahoo Entertainment!, Sixx spoke about the basic facts about the tour, which was originally supposed to hit North America in 2020, before being pushed to 2021 — and now slated to play in 2022: “On a business level, you can't get Covid insurance. So if you've got a big show — Mötley, Def Leppard, Poison, and Joan Jett — that's generating a lot of (money). If that show goes down. . . you just lose money, and you can only lose so many shows and then you're basically on tour for free. So we chose to stay back, waiting to see how AEGs and Live Nations and how other bands were gonna handle it. And I think we made the right decision.”

He spoke about the Crüe getting the act ready for the masses, starting in the spring: “We restart designing the show in April. It's basically designed, but there's some new technology that happened in the last few years we might wanna involve. And then we've already got our set — it's done — so it's not like we have to have that meeting where it's, like, 'I wanna play this song' or 'I wanna play this song.' Everybody agreed on these songs, and it's a really cool set, and there's some medleys in it.”

Sixx went on to say the music remains up in the air in regard to what the setlist will actually look like on opening night: “We start band rehearsals in May. I don't know what that looks like. We like to rehearse for three or four weeks. Even if we have four weeks and we're pretty tight at three weeks, sometimes you lose a day here and there — a guy gets sick or someone's car breaks down — so we always (give ourselves) four weeks. And then we go to Atlanta where the tour opens and we do pre-production with everybody on the bill and we set the show up and tear the show down so it all fits. And then June 19th, I think, the tour starts. And I can't wait.”

Nikki Sixx admitted to us that choosing the perfect setlist sometimes proves harder than one might expect: “Obviously people want to hear the hits, y'know, and if you don't play the hits, you're being one of those artists that go, 'We only play the new music.' Then the fans are disappointed. If you don't play any new music, fans are disappointed. So it's a balancing act. You have to struggle with how much time you have. That's the other problem, y'know? It's like, you're playing a festival, how much time do you have to actually play?”