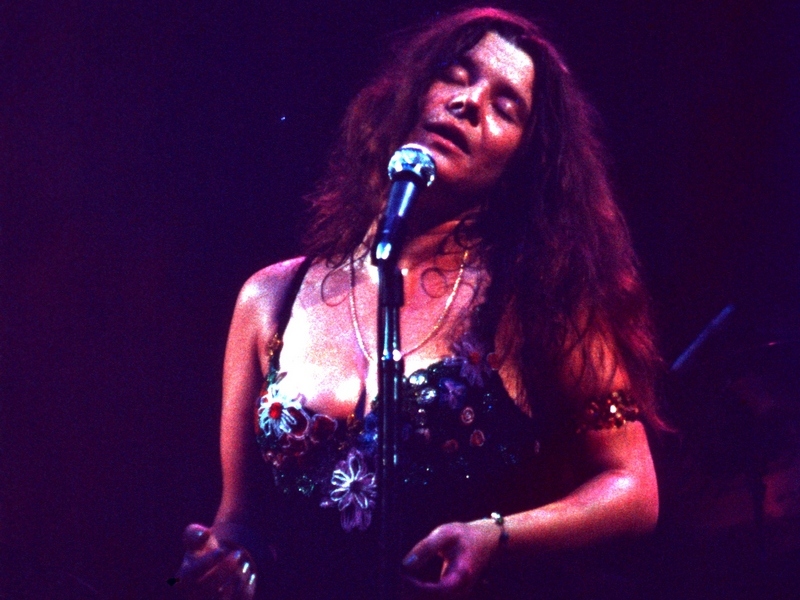 It was 51 years ago today (October 4th, 1970) that Janis Joplin was found dead. After a long night of partying, Joplin's body was discovered in her room at the Landmark Hotel in Hollywood with fresh needle marks in her arm, and her death was ruled an accidental overdose. Joplin was 27-years-old, and at the time of her death was working on what became her final album, Pearl.

Last March, in celebration of the 50th anniversary of it topping the Billboard Hot 100, was the first official video for Janis Joplin's “Me And Bobby McGee.” The clip, which was created in partnership with the Janis Joplin Estate and Columbia/Legacy Recordings, features the classic tune written by Kris Kristofferson, which in Joplin’s death became her signature song. The new clip features elements included in the new book, Janis Joplin: Days & Summers – Scrapbook 1966-68, which was released in June.

Originally released on January 12th, 1971, Janis Joplin's “Me And Bobby McGee” from the posthumous Pearl album, became the second posthumous single in pop music history to reach Number One; the first was Otis Redding's “(Sittin' On) The Dock Of The Bay,” in 1968.

The recent Joplin documentary, Janis: Little Girl Blue, premiered in 2015 at the Venice Film Festival, before hitting PBS via its American Masters series. The doc is now available for digital download.

2018 saw the 50th anniversary of Big Brother & The Holding Company's major label debut and the double-disc release of Sex, Dope & Cheap Thrills — featuring the material that introduced the world to Janis Joplin. The set was issued under its original title, which was nixed by Columbia Records for being too controversial. Sex, Dope & Cheap Thrills “restores the band's vision and intent in an essential new collection of 30 rare performances including 29 studio outtakes — 25 previously unreleased — from the mythic 1968 sessions that generated Big Brother & The Holding Company's Cheap Thrills.” Highlights on the set include such Joplin & Big Brother classics as “Piece Of My Heart,” “Ball And Chain,” and “Summertime,” among others.

Sadly, on February 12th, 2015, Joplin's closest musical collaborator, guitarist Sam Andrew — who performed alongside her in both Big Brother & The Holding Company along with her solo band Kozmic Blues Band — and was the primary musician that promoted and championed her work over the decades, died at 73 following complications from a heart attack.

In August 2014, the United States Postal Service issued a commemorative Joplin “Forever” postage stamps as part of the USPS' ongoing “music icons series,” and unique in that while purchased at the current first class rate, it will always be accepted as a first class stamp throughout the years and never need additional postage as rates increase.

In November 2013, Joplin received a star on the Hollywood Walk of Fame at 6752 Hollywood Boulevard. Among those who paid tribute to Joplin were Kris Kristofferson, record label exec Clive Davis — who signed Joplin along with Big Brother & The Holding Company to Columbia Records, and Joplin's siblings, Michael and Laura.

Janis Joplin recalled her long road to personal and creative freedom: “I started singing when I was about 17. I listened to a lot of music first and one day I started singing, and I could sing. It was a surprise (laughs) — to say the least. About ’63, I couldn’t stand Texas anymore and I went to California, ‘cause it’s a lot freer, and you can, y’know, you can do what you wanna do and nobody bugs you.”

Fans have often wondered since her 1970 death what Joplin would have gone on to do, and shortly before his death, her old friend and bandmate Sam Andrew told us that a very modest Joplin might have gone away from rock n' roll: “I think she would have gone through a couple of jazz standard albums, maybe — I, I hope she would have, 'cause I loved the way she did 'Little Girl Blue' and 'Summertime,' and to hear a couple of albums of that kind of material would have been truly great. But mainly, I think she'd just be really tickled — (does Joplin impression) 'They're still thinking about me? How can they be thinking about me? (laughs).'”

Andrews recalled that Joplin was a lot deeper than people might have gotten from her public image: “She was, like, real fast and real funny, and she had these colorful Texan expressions, and then behind there, there was an IQ maybe of 165 or something. She was just as bright as could be and interested in everything. And then, on top of that, she was punctual, which doesn't sound like an important thing when you're talking about a diva, but in day-to-day life it becomes really important. So, I just loved Janis a lot.”

In 2008, in commemoration with Joplin's 65th birthday (January 19th), a historic marker was placed by one of her childhood homes in Port Arthur, Texas.

In 2012 it was announced that actress Amy Adams had signed on to portray Joplin in the upcoming biopic, Get It While You Can. Adams, a three-time Academy Award nominee, joins a long list of actors around Hollywood who either are, or have been, attached to different Joplin films in varying stages of pre-production — including The Gospel According To Janis, which had Zooey Deschanel attached to it and a Sean Durkin-directed feature starring Nina Arianda. No start date has been announced for the biopic.

Actress Zooey Deschanel — who at one point was on board to portray Joplin — told us her research into the role has given her a deeper understanding of the legendary, yet ill-fated singer: “She's more recognized for her dysfunction than she is for, y'know, what she brought to the world of music and women in general. She was a strong woman in a time when the views of women were changing and I think she had a lot to do with that. She was a really smart person but because she had a lot of problems, that's what people focus on. That, to me, is her tragedy.”

Janis Joplin's road manger John Cooke, who sadly discovered Joplin's lifeless body on October 4th, 1970, recalls the power of Joplin's live show: “People just hadn't heard a white girl sing the blues this way. If you hadn't heard Janis before and she came out and started singing you were just blown away.”