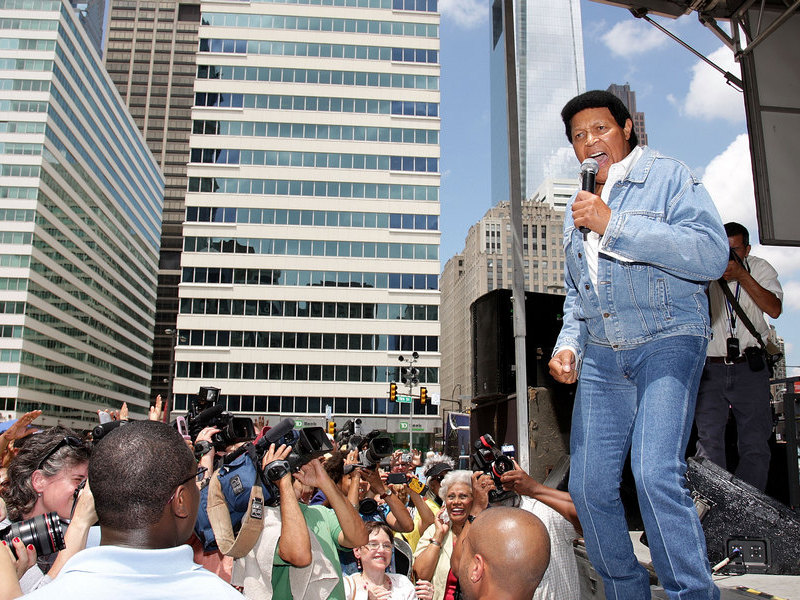 Happy Birthday to Chubby Checker, who turns 80 on Sunday (October 3rd)!!! Checker, who was born Ernest Evans, received his nickname in the late-1950's because at the time he resembled a young Fats Domino. Checker is best remembered for his string of early '60s dance hits, including “The Twist” which topped the charts 1960 and 1961. Checker went on to score 21 more Top 40 singles, including “Let's Twist Again,” “The Hucklebuck,” “Limbo Rock,” “Pony Time,” and “The Fly.”

In July 2014 Checker reached a settlement with Hewlett-Packard in a “penis measurement app” lawsuit. The Guardian reported that the legendary singer “had been seeking half a billion dollars from Hewlett-Packard for ‘irreparable damage and harm’ caused by the Chubby Checker, an app for Hewlett-Packard's Palm OS platform.

Chubby Checker told us that he feels “The Twist” not only summed up its times, but kick-started the 1960's rock revolution: “The biggest thing in the '60s is Chubby Checker. The biggest song of the '60s is 'The Twist,' of the whole decade. There was Ray Charles and Elvis Presley and the Beatles, and the British Invasion, and Motown — all that was there — but the single most important song of the '60s was 'The Twist.'”

“The Twist” remains the most popular single in Billboard Hot 100 chart history, having topped the charts in 1960 and again in 1962. Checker told us he's always been proud of the song's cultural significance: “The only song to be Number One twice as man walked on a planet is “The Twist,” and it's the biggest song in the entire decade of the '60s. We have a tremendous batting average.”

Despite “The Twist” being one of the biggest and most influential hits of the rock era, Chubby Checker, who has been eligible since the Rock Hall's inaugural in 1986, is resigned to the fact that he won't be inducted: “It's not a big deal. I mean, it's not completed without me anyway. I just like to talk about what we've done in the music business and what is still being done as a result of our being in the music industry and that will just put the Hall of Fame to shame. We don't need to talk about them. It's no sense. The Hall is not completed without Chubby Checker. What we've done is so incredible. It's okay.”

In addition to performing, Checker has devoted the last decade, or so, to his snack company, Chubby Checker Snacks, which includes everything from cookies to chocolate covered popcorn to beef jerky, and other treats.