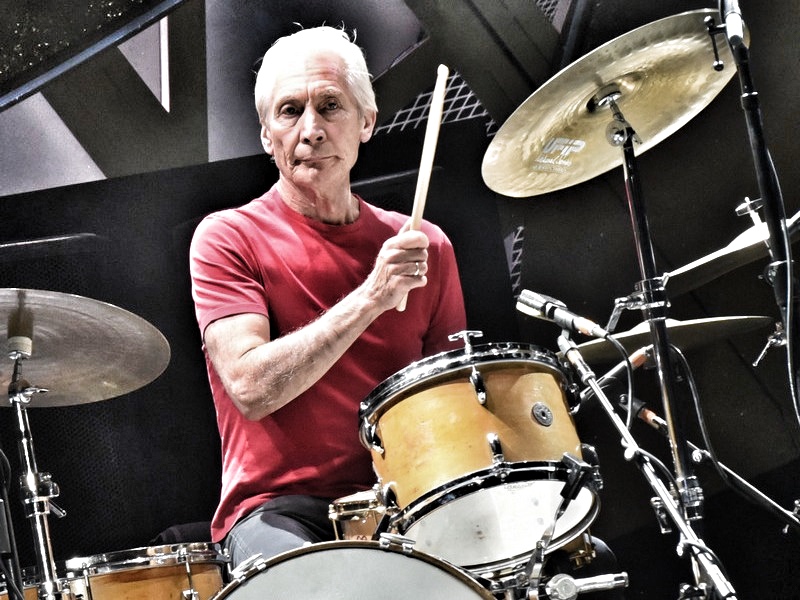 The tributes to the Rolling Stones' late-drummer Charlie Watts continue to pour in from his peers. Watts died on August 24th at the age of 80. The Stones will carry on without him, with Keith Richards' longtime collaborator and drummer, Steve Jordan performing on the band's upcoming 13-city trek, which starts next month.

Since 1972, the Rolling Stones have been asked if its then-current road trek would prove to be “the last time.” Not too long ago, Charlie Watts was asked what he thought it would take for the Stones to finally pack it in: “Well, I think if Mick and Keith said that, I think we would. If any of the others said it, no. I think they could get another drummer, I think they could get another guitar player, and they would certainly, if Daryl (Jones) didn’t want to do it anymore — we’d have a nightmare of a time finding another bass player. But, no, I think Mick and Keith would or could carry on, but I think if Mick said 'I’m retiring' — I don’t know how we’d do a show with him (laughter) and without Keith.”

Bill Wyman: “Charlie, you were like a brother to me. In the band and in life. Rest in peace.”

Ron Wood: “I love you my fellow Gemini — I will dearly miss you — you are the best”

Pete Townshend: “I only played with Charlie once, when he drummed for Ronnie Lane and me on our Rough Mix album. We did two faultless live takes (no overdubs at all) of my song ‘My Baby Gives It Away’. His technique was obvious immediately, the hi-hat always slightly late, and the snare drumstick held in the flat of the left hand, underpowered to some extent, lazy-loose, super-cool. The swing on the track is explosive. I’ve never enjoyed playing with a drummer quite so much. Of course that brings up Keith Moon, who was so different to Charlie. At Keith’s funeral Charlie surprised me by openly weeping, and I remember wishing I could wear my heart on my sleeve like that. I was tightened up like a snare drum myself. Charlie lived a quiet life in the English countryside. He had a London bolthole in St James’s for many years which I think he used mainly to visit his tailor and buy paintings. He is the exemplar of the perfect marriage, still married to his art-school girlfriend who he married secretly in 1964. I understand he lived a quiet and respectable life on the road as well. I know that like me he wasn’t mad on touring, but that wry smile of his – that hid a mischievous side to him that few us saw – could turn into the most beautiful wide-mouthed laugh at very little urging. I could make him smile simply by talking about growing up following my father Cliff’s post-war dance band. Charlie loved the ‘real’ music of that era. I’ve said here that his playing on ‘My Baby Gives It Away’ was flawless. I have suddenly remembered that he had trouble with the clipped ending. On the second take he nailed it, but was so shocked he had managed it that he burst into laughter and fell off his stool. That was a Keith Moon stunt, ask any drummer what they most dread doing and they will probably reply that they never want to fall off their stool.”

Roger Daltrey: “I would like to extend my deepest condolences to Charlie’s wife Shirley, the rest of his family and to the guys in the band. He was always the perfect gentleman, as sharp in his manner of dress as he was on the drums. Charlie was a truly great drummer, whose musical knowledge of drumming technique, from jazz to the blues, was, I’m sure, the heartbeat that made the Rolling Stones the best rock and roll band in the world.”

Yoko Ono: “Rest in peace, Charlie Watts. Our love and deepest condolences go out to Shirley, Seraphina, Charlotte and all The Rolling Stones family. Love, Yoko”

Pattie Boyd: “I knew Charlie for over 55 years. It's so sad to lose such a wonderful, talented musician. An elegant man and an elegant dresser. Bless You, Charlie x”

Denny Laine: We first met at a Birmingham Town Hall show where my band, The Diplomats, opened for The Stones in 1963 and many more times after that. I loved his old school jazzy-swing feel as a drummer and his Mr Cool personality to match. Now I’m remembering feeling like a very well-treated old friend the last time we met when he and Bill Wyman came down to the deserted food and booze filled green room to say hello especially to me, since there were no other guests in the room, at a Stones show I attended in Toronto. He always made me feel at ease in his company — that’s the thing that stands out the most. A gentle soul. He was, and still is via his legacy, one of the best drummers on the planet. We will all miss that beat he laid down but thankfully it will never be forgotten. It will remain in our hearts forever — as he will in mine. Rest in peace, Charlie.”

Steve Winwood: “I met Charlie in 1965 when we toured with the Stones on a package theatre tour. I had the pleasure of playing with him on several occasions since then, and he was very supportive and a thoroughly nice man. Besides that, he was a brilliant drummer with his own special technique and definitely throughout the years was the defining groove of the Rolling Stones.”

Mick Fleetwood: “Dear Charlie, I, like so many, am sad today… However, knowing there are no words, still I’m driven to say to you…”' You, in life, had style!!' You as a player were above and beyond!! You are my dream come true!! No one could drive a band like you!! Most of all, again, the meaning of style comes to mind .. For sure …in simply everything you did!!! Family took such focus in your life…in an often-unfocused world you lived in. And in the best of humor…my God you were one hell of a sharp dresser!! With SO much respect…and support to your family There is now you, to keep the two and four, and MORE!! You will be missed by so many… Love and respect, Mick Fleetwood & Fleetwood Mac”

Robbie Robertson: “Charlie’s drumming is powerful and unique. His approach is entirely his own and helped shape the sound of rock and roll. Blessings Charlie Watts.”

The Grateful Dead's Bill Kreutzmann: “Drummers are bonded together by virtue of their instrument and I am saddened that today we lost a brother. The last time I saw the Rolling Stones was in the arena in Oakland where the Grateful Dead had performed many times before. But being in the audience, I got to experience that show as a fan. I even paid for parking! When the Stones brought out Tom Waits to sit in on 'Little Red Rooster,' one of my friends reminded me that the Grateful Dead had played that very song in that very room. Charlie had his own feel for it and I loved it. I always admired his steadfast approach, ability, and style. Rest in peace, brother.”

Blondie Chaplin: “Having worked with the greatest band in History, I am deeply saddened by the passing of the classy Gentleman who I had the pleasure of working with. To unravel so many Memorable ties of Musical entanglements. A class act was Mr. Watts. My heart is crushed and my memories will continue I suppose to ensure my Broken heart. Love you Charlie Watts.”

Max Weinberg: “It’s hard to imagine a world without Charlie Watts. I’m just stunned. The first thing I flashed on was November 1965, at the Mosque Theater in Newark, me in the second row. And 'Get Off Of My Cloud' had just come out. I used to sing that in my band, badly, of course. And there I was, really close, seeing the Rolling Stones live, and, of course, focusing on Charlie. I have a beautiful note from Keith (Richards), that he wrote after he read The Big Beat where he references Charlie. And I’m feeling for Keith because there are many would-be Charlie Watts–type drummers, myself included. You would always see want ads for 'Charlie Watts-type drummers.' But there was only one Charlie Watts. I can’t express what Charlie Watts meant to me as an individual and certainly as an icon of music, and not just in rock.”

Peter Gabriel: “Charlie was an elegant, generous and modest musician and brilliantly provided the living, rhythmic foundation on which so much of this soundtrack to our lives was built”

John Oates: “No matter what song the Stones played… it always had a deep groove… that was Charlie Watts…he will be missed.”

David Coverdale: “A very fine, gifted man…anchoring one of the very finest rock bands in history…Another Beautiful Soul…Thank You, Charlie”

Flea: “The most subtly, warmth and feel of any rock drummer in history. Rest beautifully Charlie we treasure your gifts.”

The Zombies' Rod Argent: “Felt really sad to hear yesterday of the passing of Charlie Watts. He was truly a great rock’n’roll drummer. And, strangely enough, I believe that was because of his grounding in jazz. Like all the great jazz drummers he existed to serve the music, serve the groove, and enhance everything that was going on In front of him. His drumming sounded deceptively simple, but it swung; every fill really counted, and nothing ever detracted from what was being played. R.I.P. Charlie – a life well lived.”

Sheryl Crow: “A hero is gone. No words. A huge gaping hole in the universe. RIP Charlie Watts”