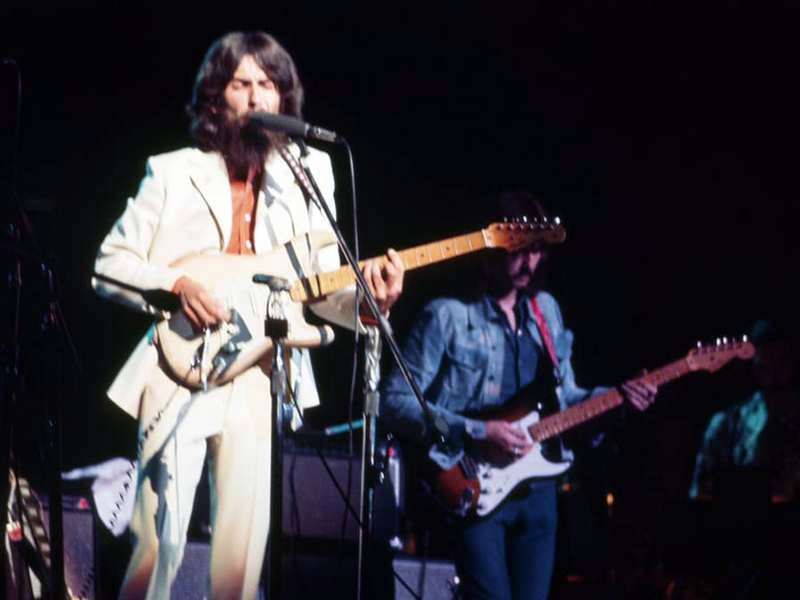 50 Years Ago: George Harrison Mounts ‘The Concert For Bangladesh’

It was 50 years ago Sunday (August 1st, 1971) that George Harrison and friends performed the legendary Concert For Bangladesh at New York City's Madison Square Garden. Harrison organized the shows at the urging of his mentor, sitar virtuoso Ravi Shankar, who asked Harrison to help raise and awareness for his native, famine stricken East Pakistan, by then renamed Bangladesh. Harrison sprang into action and rounded up a veritable who's who in the rock community, including fellow Beatles bandmate Ringo Starr, the semi-reclusive Bob Dylan, Eric Clapton, Billy Preston, Leon Russell, Badfinger, and well over a dozen horn players and singers. With the world's eyes on him, Harrison planned rock's first global fundraiser, as well as his debut as a solo performer.

Harrison had actually asked his feuding ex-bandmates John Lennon and Paul McCartney to perform at the concert as well. According to several sources, McCartney initially agreed, but only if Lennon also performed, with the two playing separate solo sets. McCartney, who was days away from announcing the formation of his solo band Wings, eventually backed out, stating that there were too many legal problems yet to be sorted out between him and former Beatles and their then-manager Allen Klein for them to appear on the same stage.

Lennon was reportedly all for appearing, until Harrison informed Lennon that only he, and not wife Yoko Ono, was invited to participate. After a long argument with Yoko about whether to perform, Lennon flew to Paris alone and in a rage, missing the entire show, and causing a major rift in Lennon and Harrison's relationship. Harrison never formally asked Ringo Starr to play; Starr took it upon himself to tell Harrison he'd be there. Harrison also reportedly turned down offers from Mick Jagger and David Crosby, who asked to appear.

Harrison's first wife Pattie Boyd says that no one expected the event to end up as the historic event it has become: “Well, of course we didn't know it was going to be the biggest concert in history. We knew it was going to be a very big concert, and he clearly hoped to raise a lot of money. And as far as I remember I think I flew in a couple of days before the show.”

Harrison wasn't sure until the last minute that Dylan would actually turn up for the show, and can even be seen in the movie of the concert peering into the wings to see if Dylan actually was there before introducing him.

Although Eric Clapton was invited to be the show's lead guitarist, he was in such bad shape while dealing with his heroin addiction that Taj Mahal's Jesse Ed Davis was deputized to play and pick up whatever musical slack Clapton might leave behind.

Boyd, who after her divorce from Harrison went on to marry Clapton, recalled that everyone was worried about his health at the time: “I remember that it was a pretty major, wonderful show, fantastic show. But there was a bit of concern about Eric when he flew in because of the problems that he had at that time, and everyone was really concerned. And I think this sense of concern was everywhere, really.”

The show featured Harrison performing selections from his recent Number One album All Things Must Pass, including the chart topper “My Sweet Lord,” as well as Beatles classics such as “Here Comes The Sun,” “While My Guitar Gently Weeps,” and “Something.” Starr took the lead on his recent Top Five Harrison-produced hit “It Don't Come Easy,” and Dylan performed a set of his '60s classics including “Blowin' In The Wind,” “Mr. Tambourine Man,” and “Just Like A Woman,” while backed by Harrison in slide guitar, Starr on tambourine and Leon Russell on bass.

The late-Billy Preston got an early ovation with his rousing performance of “That's The Way God Planned It.” In 2005, Preston recalled the atmosphere among the musicians at the Bangladesh concerts: “Everybody was just excited and thrilled that it went so well. Everybody had a good time with each other. There was no egos.”

One of the most lighthearted moments of the show was when introducing the band, Harrison nearly forgot to include Preston following his show-stopping performance: “Have we forgotten anybody? I don't know. . . We've forgotten Billy Preston!!! (applause)”

Longtime Beatles confidante and solo session bassist Klaus Voormann says that he was never more proud of Harrison than when he took charge of The Concert For Bangladesh concert at the urging of friend Ravi Shankar: “I really appreciated in later days that he actually went in front of that audience on the Bangladesh concert, because he did it for his friends. That he actually went up there and talked to an audience. I think it must've been about the first time that he's ever done this. Y'see, a few things in English, or a few things in German on a stage where it didn't matter is a big difference than to an audience where he knew it's going to be filmed and it's going to be used to talk to an audience.”

Apple Records staffer Chris O'Dell, who recently wrote her memoirs, called Miss O'Dell: My Hard Days And Long Nights With The Beatles, The Stones, Bob Dylan, Eric Clapton And The Women They Loved, admits that she and Pattie Boyd actually blew off the matinee performance: “Isn't that weird? Y'know when I went back over that and I was reading it after we wrote it, I thought — 'that's weird, how come we didn't go?' Y'know? But as I think about it — I don't know what it was — I think we just wanted to hang out and get ready and take our time. The emphasis was on the evening show because there was a big party afterwards (laughs).”

The Concert For Bangladesh three-record set peaked at Number Two on the Billboard charts, and went on to win the 1972 Grammy Award for Album Of The Year.

The revenues from the concert tickets, live album, movie, VHS, and now recent DVD sales have topped $15 million. The concerts, which were rock's first major charity benefits, paved the way for every benefit that followed.

In 2006, Harrison's widow, Olivia Harrison, appeared at Madison Square Garden on the anniversary of the concerts, when a plaque commemorating the event was placed on the venue's walk of fame.

When the album became available online via iTunes it included the special bonus track addition of the single, “Bangla-Desh” — which has only previously been available on vinyl. The single, backed with “Deep Blue,” was originally rush-released on July 28th, 1971 — only four days before the historic concerts — went on to peak at Number 23 on the singles charts.