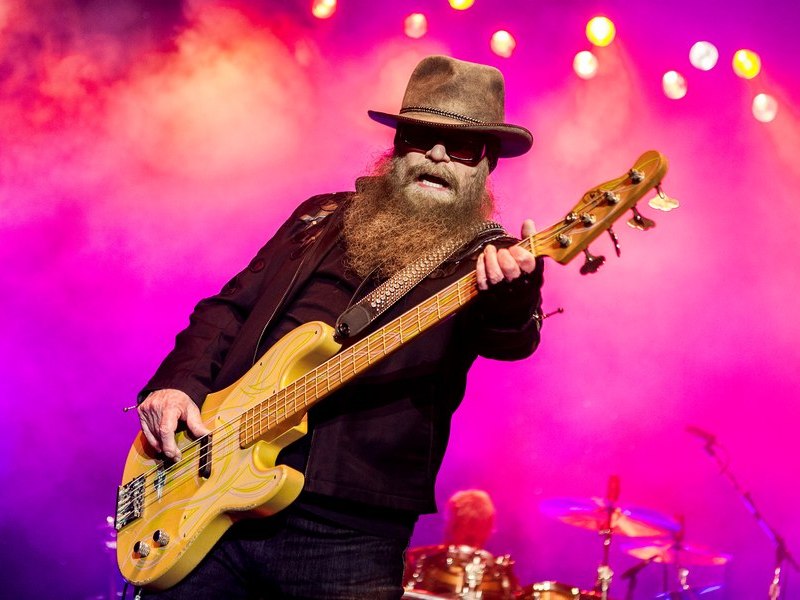 ZZ Top's bassist for over 50 years, the great Dusty Hill, died in his sleep on July 27th at age 72. Hill's cause of death is unknown, but on July 21st the band posted that he was “on a short detour back to Texas, to address a hip issue.” The band canceled last night's (July 28th) show in Simpsonville, South Carolina, and stated that per Dusty Hill's wishes they will carry on with his tech Elwood Francis assuming bass duties.

Surviving members Billy F. Gibbons and Frank Beard issued a statement mourning their friend and bandmate: “We are saddened by the news today that our Compadre, Dusty Hill, has passed away in his sleep at home in Houston, Texas. We, along with legions of ZZ Top fans around the world, will miss your steadfast presence, your good nature, and enduring commitment to providing that monumental bottom to the 'Top.' We will forever be connected to that 'Blues Shuffle in C.' You will be missed greatly, amigo.”

Back in 2016, ZZ Top was forced to postpone its tour when Dusty Hill fractured his shoulder. Hill fell prior to the band's show at Lubbock, Texas' Lone Star Center. Prior to that, in 2014, the band was forced to push back a string of dates after Hill injured his hip on the band’s tour bus.

Dusty Hill was born on May 19, 1949, in Dallas, Texas. He and Frank Beard moved to Houston in 1969 where they teamed up with Billy F. Gibbons in his newly-formed ZZ Top. Although Gibbons was primarily the band's lead singer, Hill took the lead on the group's 1975 Top 20 classic, “Tush.”

When we last caught up to Dusty Hill, he told us that two things kept the band going — their love for performing together, and a healthy sense of humor: “The thing is, we enjoy playing together, working together on stage. That's the bottom line. There's probably a lot of other reasons, but that's gotta be the main one — the music. And I think, basically, Billy and I just dig hanging out with Frank.”

Upon ZZ Top's 2004 induction into the Rock and Roll Hall of Fame, Dusty Hill told us he and the band were over the moon: “It's certainly an honor. I mean, we've had the pleasure to induct people in the past and now we're on the other side — not really the other side. We get to enjoy the show, too.”

Not too long ago, we asked Dusty Hill, if back in 1969, he or either of his bandmates — Billy F. Gibbons and Frank Beard — could ever have conceived that they'd still be recording and on the road all these years later: “I don't think anybody knew. We hoped to do some records and do some touring. We were asked one time, I think we were together 10 years or, something like that, y'know, how that felt. I remember thinking, 'Gee, has it been 10 years? That's a long time!'”

John Fogerty: “We are devastated to hear about Dusty’s passing. We were so blessed to share the stage with the great Dusty and ZZ Top many times, and if that wasn’t Rock and Roll heaven, I don’t know what is. The show we did together just last week would be his last. So heartbreaking.”

Paul Stanley: “WOW! Dusty Hill. What an icon. ZZ Top's bassist forever. So unique. Always a gentleman from the days of us opening for them through the recent days of them opening for us. I don’t know what to say but 'Thank you' and 'Rest however you damn well choose!'”

Ozzy Osbourne: “Rest In Peace Dusty Hill of ZZ Top. My thoughts go out to Billy f Gibbons and Frank Beard and all the ZZ Top fans around the world”

Foghat: “We are so upset to hear of the passing of Dusty Hill! We have always been such fans of ZZ Top & Dusty and have done many shows together. Our thoughts and prayers are with his family, band family and friends and fans around the world. R.I.P. Dusty.”

Kenny Wayne Shepherd: “RIP Dusty Hill. The soundtrack of my life has been heavily influenced by your music. Thank you my brother.”

Christopher Cross: “I’m deeply saddened by the loss of my friend Dusty Hill. A great musician and a rock icon. My condolences and prayers go out to his wife Charlene, his family, and to Billy, Frank and to the entire ZZ Top organization.”

Paul Young: “It’s with heavy heart that I have to say goodbye to one member of That Lil’ Ol Band From Texas: RIP Dusty Hill from ZZ Top. I have loved this band since I was 14 & they are without doubt the coolest band on the planet! My condolences to his family, Frank & Rev. Billy G”

Martha Quinn: “Texas takes off its cowboy hat today. Rock and roll has been stopped in its tracks. Dusty Hill you will always be bad, nationwide, and much missed. My deepest condolences to the ZZ Top family, and to Dusty's loved ones who number many.”

Stephen Perkins: “We will miss you Dusty Hill”

Gilby Clarke: “Lost another legend today. Dusty Hill. we will always remember him as an authentic Texan with a great sense of humor & ability to hold down the low end of zz top with a growl. you will be missed RIP Dusty Hill”