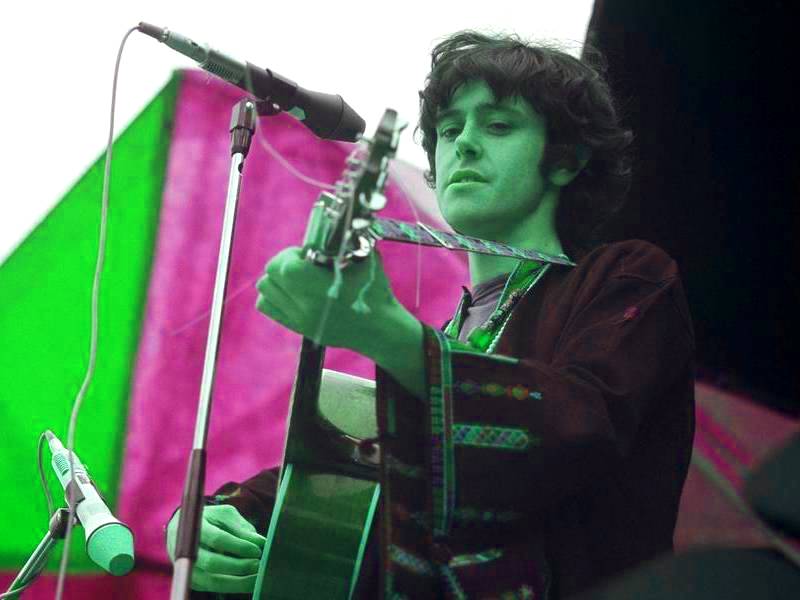 Happy Birthday to singer-songwriter Donovan, who turns 75 today (May 10th)!!! Donovan, whose last name is Leitch, is best known for his string of 1960's hits including “Mellow Yellow,” “Hurdy Gurdy Man,” “Jennifer Juniper,” “Atlantis,” “Catch The Wind,” “Colours,” “Riki Tiki Tavi,” “Wear Your Love Like Heaven,” and the 1966 chart-topper “Sunshine Superman.” In 2019, Donovan's documentary Donovan & The Beatles premiered on Sky Arts in the UK.

Donovan recently discovered a track, “Still Waters,” from his 1969 sessions featuring Nils Lofgren, which is featured on his new vault release, Lunarian. Donovan recalled the future E Street Band guitarist, saying, “When we met, I realized Nils was like me: a one-off guitar player, with his piece of fabric nailed to his Telecaster — a road gypsy boy.”

Out now is Donovan's latest studio set, called Shadows Of Blue, which was recorded in Nashville. In 2014 Donovan was inducted into the Songwriter's Hall of Fame. In 2012, former touring partner John Mellencamp inducted him into the Rock and Roll Hall of Fame.

Back in 2009, Donovan made headlines when he joined old friends Paul McCartney and Ringo Starr at New York City's Change Begins Within concert benefiting the David Lynch Foundation and Transcendental Meditation education. Donovan reflected on his trip to Rishikesh with the Beatles in early 1968: “Transcendental Meditation naturally unfolds any student's full potential. 41 years ago (laughs) — or was it last year, boys? We traveled to India (laughs) to see if was true what we'd only read about in the books that meditation is the real way to be fulfilled. We found it to be true and we sang out the good news in our songs. It's really simple; (Laughs) Change begins within.”

In 2008 he released the three-hour documentary spanning his life and career. The DVD called Sunshine Superman: The Journey Of Donovan — which was seven years in the making — featured an additional two hours of bonus featurettes, including vintage concert and TV performances, a poetry recording session with his father, insights on his work in Transcendental Meditation, and even a short bio on his guitar maker.

With the release of the DVD, Donovan said that he's happy to finally document his early career as wandering beat songwriter in Britain: “When I came out of bohemia, it was actually bohemian ideas that invaded popular culture — and good thing too. And on the wings of folk music, because in the folk clubs, the beat clubs, the art schools, that's where all the books were. And the girls with the books wore long dark hair, black mascara, pure white skin, pretty much (laughs) kinda goth, yeah! And they were the thinking girls y'know?”

Among the highlights of all of Donovan's live shows is his rendition of his 1966 hit “Mellow Yellow.” Donovan credits legendary producer Mickie Most for singling the song out for the monster hit it became: “It's curious — 'Mellow Yellow' was a one-off sort of fun song that I wrote at an after-show party in Sweden. And it was a throwaway song. And Mickie would listen to the new selections and say 'OK, what do you got?' and I'd go through them and he'd immediately had known and say 'That's a single.' I said, 'What, 'Mellow Yellow?' He said, 'Yeah, that's it.' Said, 'My goodness, that's just a throwaway.' He said, 'That's it!'”

Donovan recently published The Autobiography Of Donovan: Hurdy Gurdy Man, which shed new light on his early life and his friendships with Bob Dylan, Joan Baez, and the Rolling Stones. The book also revealed Donovan's part in collaborating on several Beatles songs, including “Yellow Submarine” and “Rocky Raccoon.”

Donovan also released the career-spanning box set Try For The Sun: The Journey Of Donovan, and appeared on stage with Beach Boys' Mike Love at a recent lecture on Transcendental Meditation.