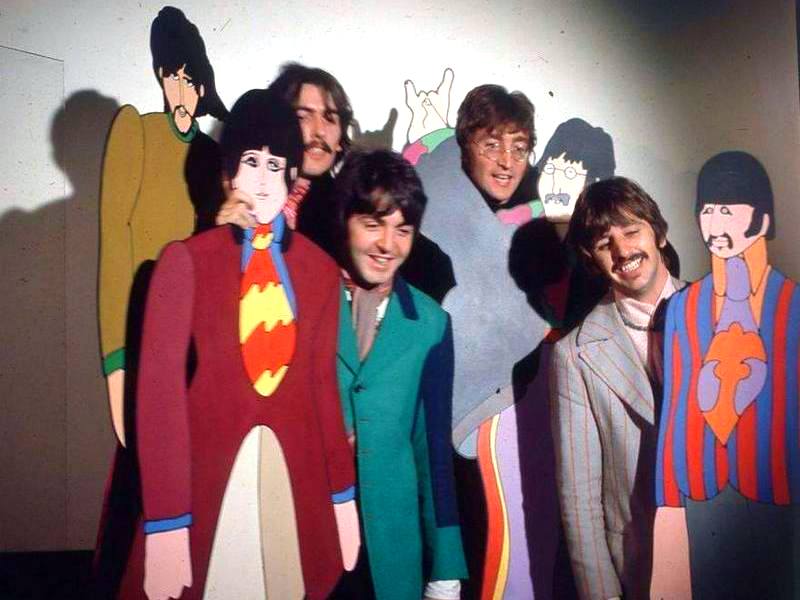 Flashback: The Beatles Begin Sessions For ‘Lucy In The Sky With Diamonds’

It was 54 years ago Sunday (February 28th, 1967) that the Beatles began sessions for “Lucy In The Sky With Diamonds.” As opposed to their first album in 1963, in which the majority of the album was recorded in one marathon 11-hour session, the Beatles were now afforded the luxury of open-ended studio time, and spent the night's session only rehearsing the song without the tapes rolling. The session, which took place at Abbey Road's Studio Number Two between 7 p.m. and 3 a.m., featured numerous unnumbered run-throughs of the song as the group worked out its arrangement. Session tapes for “Lucy In The Sky With Diamonds” show that the song, which was mainly written by John Lennon, was greatly enhanced by Paul McCartney's instrumentation and guidance as he helped Lennon nail the spacey lead vocal.

The initials of the song's title are the same as those of the hallucinogenic drug LSD and that caused enough controversy to get the song banned from British airwaves. Lennon, who wrote the majority of the lyrics, always insisted that the song was written after his then-three-year-old son Julian came home from school with a crayon drawing of a schoolmate. When Lennon asked him what the picture was of, Julian answered, “Lucy in the sky with diamonds.”

John Lennon was quick to give to give credit to the group’s producer George Martin and his tireless effort to help realize and expand their musical visions: “We did a lot of learning together. He had a very great musical knowledge and background, so he could translate for us and suggest a lot of things; which he did. And he’d come up with amazing technical things, like slowing down the piano, playing it slow and putting it on. . . . and things like that. Where who’d be saying: ‘Well can we, we wanna go ‘ooh’ and ‘eee-eee’ and he’d say (imitates Martin), ‘Look chaps, I thought of this this afternoon. Last evening I was talking to . . . .’ – whoever he was talking to – ‘. . . and I came up with this.’ Y’know, and we’d say, ‘Oh, great!‘ But he’d also come up with things like, ‘Well, have you heard an oboe?’ — ‘’Oh, which one’s that?’ — ‘It’s this one.'”

Ringo Starr's former songwriting partner and producer Mark Hudson says that in 1974 Lennon gave him advice on lyric writing, and told him that words don't need to be literal to work in songs: (Imitates Lennon) 'Cause you make up your own meaning, man.' And part of me was crushed, because I was waiting for this deep stuff and part of me was set free as a songwriter to go, 'You make up your own image, and let people take the meaning of the image.' And when you hit 'em over the head with (sings) 'All You Need Is Love' — that's self-evident. But with all the other stuff, just be colorful. So I got to ask him one Beatles question every time I was with him.”

The Beatles had permanently stopped touring in 1966, and when Sgt. Pepper's was released in June 1967, much was made of the fact that they had deliberately created an album that could not be reproduced live.

George Martin's son, producer Giles Martin explained that his father and the Beatles were only interested in the creative end of recording: “The wanted to push the boundaries of sound. They wanted to create something new all of the time. He was open to anything. There were no rules. The only rules were to make great sounding records.”

“Lucy In The Sky With Diamonds” holds the distinction of being the first song from the album to ever be performed live by a Beatle. John Lennon, in his second-to last live appearance, performed the song with Elton John on November 28th, 1974 at New York's Madison Square Garden. Lennon had contributed to Elton's remake of the tune, which went on to reach Number One early in 1975.

In 2009, Julian Lennon wrote and recorded the charity single “Lucy” for his childhood friend Lucy Vodden, who had recently died after battling lupus. A portion of the proceeds from the “Lucy” EP went to benefit Lupus research.

Included in the EP was a copy of Lennon's original 1967 drawing of Lucy which inspired his dad to write “Lucy In The Sky With Diamonds: “Dave Gilmour has it. He's kindly allowed (laughs) us to use a copy of the version for the EP cover and the little poster inside.”