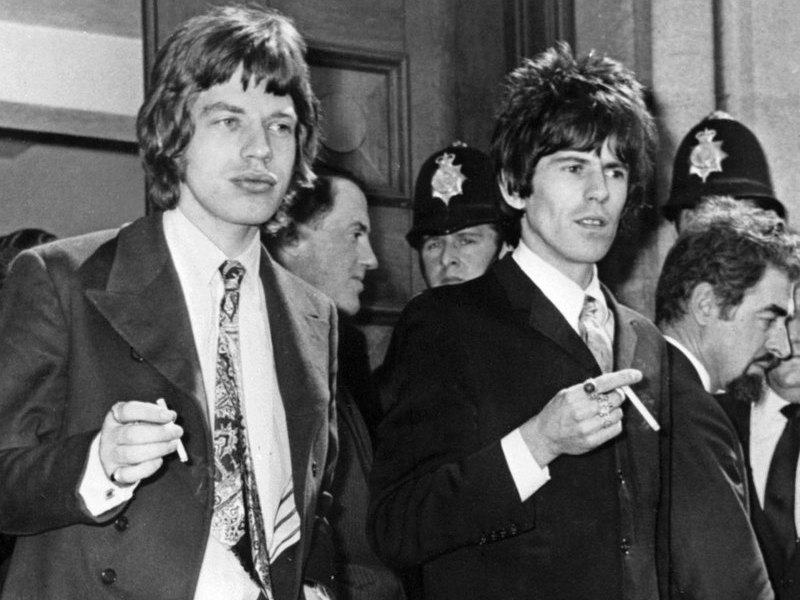 It was 54 years ago today (February 12th, 1967) that the Rolling Stones' Mick Jagger and Keith Richards were arrested at Richards' West Sussex, England home for drug possession. The bust followed Donovan's arrest by the same drug squad, led by Norman Pilcher, the previous year, and sparked not only public debate within the rock community, but also within the underground and conservative press. Eric Clapton reportedly escaped arrest by Pilcher — who rang his doorbell pretending to be a mailman — by fleeing from his back door.

According to the Stones, the raid was a set-up by the British newspaper The News Of The World, which had earlier reported that Jagger had taken LSD at a party thrown by the Moody Blues. Jagger immediately began legal proceedings against the paper for slander. According to Bill Wyman's 1990 autobiography Stone Alone, an informant reported the details of Richards' party to The News Of The World, who in turn told the London drug squad. The arresting officers waited until after the Harrison's left the party to charge the house, presenting Richards with a warrant issued under the Dangerous Drugs Act of 1965.

Jagger was accused of illegally possessing four tablets containing amphetamine sulphate and methylamphetamine hydrochloride and Richards was charged with “allowing his house to be used for the purpose of smoking cannabis.” Fraser was charged with possession of heroin and eight capsules of methylamphetamine hydrochloride. On May 10th, Jagger, Richards, and Fraser appeared in court and were each released on $200 bail.

On June 27th, Jagger's trial began, with Richards' and Fraser's starting the next day. During the trial, much was made of Faithfull being nude and wrapped in a bear rug when police arrived, which was supposed to suggest to the jury that she was under the effects of drugs and not in command of her senses.

On June 29th, Jagger was sentenced to three months in jail for possession of amphetamines and Richards to one year for allowing his home to be used for cannabis use. The Stones appealed the decision.

That day, the Who's Pete Townshend, Roger Daltrey and Keith Moon released a single of the Jagger-Richards compositions “Under My Thumb” and “The Last Time” in an effort to keep the band's work out in the public while dealing with their legal battles. The Who's bassist, John Entwistle, was away on his honeymoon and missed the session.

On July 1st, The London Times' William Rees-Mogg published his legendary editorial lambasting the Stones' arrest and legal persecution, called “Who Breaks A Butterfly On A Wheel?” The editorial helped change public perception of the severity of the Stones' sentences by saying, “It should be the particular quality of British justice to ensure that Mr. Jagger is treated exactly the same as anyone else, no better and no worse. There must remain a suspicion in this case that Mr. Jagger received a more severe sentence than would have been thought proper for any purely anonymous young man.”

On July 31st, Jagger and Richards' charges were overturned. Fraser wasn't as lucky and ended up serving six months in jail.

Richards recalled the ramifications of the bust in the band's official 2003 biography, According To The Rolling Stones, saying that, “When we got busted at Redlands, it made us realize that this was a whole different ball game and that was when the fun had stopped. Up until then, it had been as though London existed in a beautiful space where you could do anything you wanted. And then the hammer came down and it was back to reality.”

Jagger says that detailing the Redlands bust in the book allowed them to finally document how turbulent the legal-related events were, among other things: “The end result is really interesting, I think, because I think the interviewers were quite clever in talking about, y'know, different aspects of the band's career that we haven't really talked about. So, the mixture of that is quite, is quite good. It gives you a different flavor from before.”

Over the next two years, the Stones' guitarist Brian Jones faced similar harassment from the London drug squad. John Lennon and Yoko Ono were also arrested for possession of cannabis in November 1968, and George Harrison was arrested in March 1969. Both Lennon and Harrison stated on numerous occasions that the drugs were planted on their property.

In 1975 John Lennon recalled his infamous 1968 drug bust, which was instigated — like Jagger and Richards' — by the infamous Norman Pilcher, and ultimately led to his ongoing immigration hassles throughout the 1970's: “In the late-'60s, there was a head-hunting cop, who was not very high up in the drug department in London, which was pretty new anyway. They had two dogs for the whole department. And he went around and bust(ed) every pop star he could get his hands on, then he got famous. And some of the pop stars had dope in the house and some of them didn't. It didn't matter to him — he planted it or did whatever. That's what he did to me, 'cause at the time, I didn't have any drugs and I just copped a plea. Y'know, he said, 'I won't get ya for obstruction if you cop a plea.' And I thought, 'It's $100, or whatever. It's no skin off my nose' — little thinking it would reverberate.”

In 1972 Norman Pilcher was charged with “conspiracy to pervert the course of justice” after it was alleged that he committed perjury. He quit the police force before being sentenced to four years in prison. In 2020 he published his memoirs, entitled Bent Coppers.