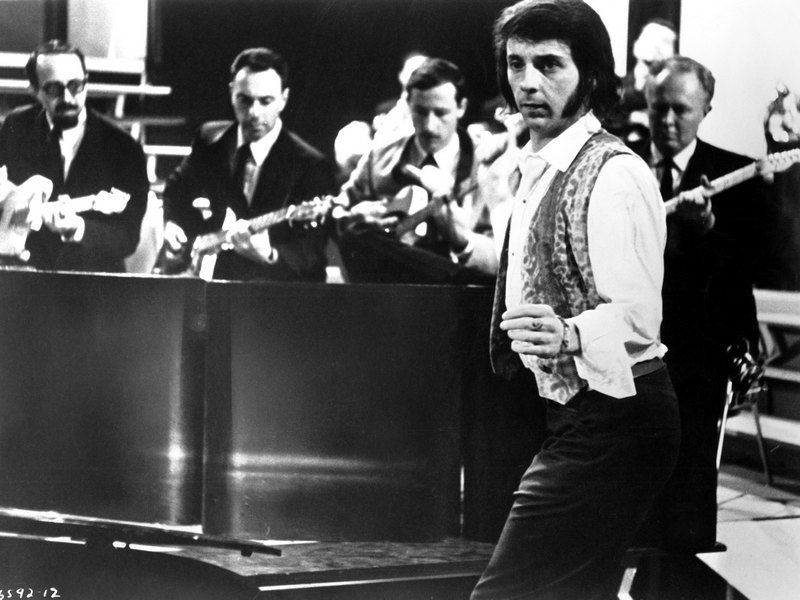 Legendary record producer and convicted murderer Phil Spector is dead at age 81, according to Billboard. Spector, who was renown for his famed “Wall of Sound” record productions of the early-'60s died on January 16th, of reportedly Covid-related issues at Stockton’s California Health Care Facility, California State Prison. Spector had been serving a 19-year sentence for a 2009 murder conviction of the 2003 shooting death of actress Lana Clarkson in his Los Angeles home.

The California Department of Corrections and Rehabilitation reported Spector was “pronounced dead of natural causes around 6:35 p.m. at a local hospital. The San Joaquin County medical examiner will determine an official cause of death.”

Donna Clarkson, the mother of Lana Clarkson — Spector's murder victim issued a statement upon the news of Spector's death: “Lana Clarkson was a warm, compassionate, kind, loving woman who would be 58 years old now. Her energy, brightness and love of life have sustained her family since her murder 18 years ago.”

In the years prior to Clarkson's murder, Spector was known in the music business as an extremely eccentric, mentally unstable, and often violent recluse, crippled at the prospect of being compared against his watershed early-'60s works.

Spector is best remembered for co-writing and producing such hits as “Be My Baby,” “Baby, I Love You,” and “Walking In The Rain,” by the Ronettes, “You've Lost That Lovin' Feeling” by the Righteous Brothers, “He's A Rebel,” and “Da Doo Ron Ron” by the Crystals, “(Today I Met) The Boy I'm Gonna Marry” by Darlene Love, “To Know Him Is To Love Him” by the Teddy Bears, and “River Deep, Mountain High,” by Ike & Tina Turner, among others.

He also worked on the final Beatles' release Let It Be, as well as John Lennon's albums John Lennon/Plastic Ono Band, Imagine, Some Time In New York City, and Rock N' Roll, and George Harrison's All Things Must Pass, The Concert For Bangladesh, and Living In The Material World.

His '70s credits include Dion, Cher, and Leonard Cohen, among others.

Although during the 2000's, Spector produced sessions for Celine Dion and British indie rock band Starsailor, none of the material has been released. His last fully completed production project was the Ramones' 1980 End Of The Century album. After that, Spector co-produced Yoko Ono's 1981 Season Of Glass album.

Ronnie Spector, the lead vocalist of the Ronettes and Spector's former wife, posted a tribute on Instagram:

Meeting him and falling in love was like a fairytale.

The magical music we were able to make together, was inspired by our love. I loved him madly, and gave my heart and soul to him.

As I said many times while he was alive, he was a brilliant producer, but a lousy husband.

Unfortunately Phil was not able to live and function outside of the recording studio.

Darkness set in, many lives were damaged.

I still smile whenever I hear the music we made together, and always will. The music will be forever.

Singer Darlene Love, who recorded her classics works with Spector, spoke candidly to Rolling Stone about her relationship with him — which was plagued by lawsuits and bad blood for years — said in part:

When I heard he was arrested for murder, I said, 'I knew this day would come. And it’s come.' I really, really did feel bad.

As far as our relationship goes, I had to learn, with the help of God in my life, that I cannot carry hatred around with me. That only affects me. And hatred can hurt you in all type of ways, physically and mentally. I definitely wasn’t going to give that to him. I had to do a lot of soul-searching. I had to do a lot of praying. I even prayed for Phil. I knew I couldn’t live this kind of life.

I wanted to be a happy and joyful person. Happiness is what keeps you well and helps you get along with people. You can’t always be thinking in the back of your head, 'So and so did this to me. My career would be here if he hadn’t done this.'

I had to get rid of all that from me and just think about what he did. And if it wasn’t for Phil Spector, I wouldn’t have a career. Here we are over 50 years later, and I’m reaping the benefits of what happened over 50 years ago.

I hate the fact that he died the way he did and I hate where he was when he died. Right now, I feel very, very sad.

Ronnie Spector admitted that Phil was marvel to watch run a recording session: “Phil was so great in the studio. I have to give him that. He knew how to tell those musicians what to do. He knew things — like it's a wrong note and it's all these men, you know musicians in the studio. And he knew if somebody was playing a violin wrong, he knew it.”

She also said that Phil had taken such complete control over her personal and professional life in the late -60s that she sometimes didn't even know what record label she was signed to: “I was so young and I knew so little. You know and then I was 3,000 miles away from home. I was so young that I didn't know that he had me on Apple Records, A&M (Records), I never got a dime. When I came back to New York, I had nothing. No money, nothing.”

The late, great Glen Campbell, who was a member of the gang of studio musicians nicknamed the “Wrecking Crew” who recorded for Spector, told us that he was always in control when it came time to record: “He never was that 'mania,' if you want to call it that in the studio. He knew better than to rant and rave or mouth off, because y'know, he knew what he wanted, and he had the patience to sit there.”

The late-Hal Blaine's drums will always be synonymous with Phil Spector's legendary “Wall Of Sound.” Blaine explained that Spector pushed Blaine to carve his own path when developing his own parts for the tracking dates: “All of a sudden, I just became Phil Spector's drummer. He loved what I did, I had carte blanche — 'Whatever you wanna do.' Y'know, when I wanted to put jingle bells on a pop song, everybody said, 'This is not a Christmas song!' I said, 'Yeah, but it just makes it feel good. It just goes.' And Phil, Phillip loved that stuff, said, 'Do it.' Castanets — 'do it.' 'I know it's not a Spanish song' — 'Do it.' Shaker cans, maracas — 'Do it.'”

Darlene Love, who was the voice behind many of “Wall Of Sound” producer Phil Spector's hits for the Crystals and Bob B. Soxx & the Bluejeans, says that she would often record a tune and not know who the song would be credited to: “I would go into the studio, like when I went in to do 'He's A Rebel,' I knew it was gonna be a Crystals record. I did not know 'Da Doo Run Run,' '(He's Sure) The Boy I Love,' was going to be a Crystals record, because Phil said this is going to be your next release as 'Darlene Love.' By that time he had changed my name and when we went into the recording studio to record '(He's Sure) The Boy I Love,' and 'Da Doo Run Run,' it was supposed to be under the name of 'Darlene Love.' When I heard it on the radio was when I found out that he had put the Crystals name on it.”

Love explained that over the years, Spector made few friends in the industry — least of all with the acts he produced: “The only thing about Phil Spector (that) was amazing. . . Everybody he touched he was trying to destroy to make his name bigger. It wasn't about his artists, ever. It was always about him — 'I'm the one that did it.'”

During a conversation with Yoko Ono in the mid-'90s, she shed light on how and why the producer and Lennon gelled so easily: “There's a myth about Phil, but I think he's a very professional person. . . in the studio. And, also, he knows exactly how to deal with an artist like John. His sensitivity level is very similar to John's, so they got along very well.”

Just prior to his 1980 murder, John Lennon looked back at his early solo work with Phil Spector behind the boards. Lennon explained to the BBC how he needed to make a concerted effort to pull the best out of Spector — without letting him take over the entire record: “We didn't want the 'Wall Of Sound,' we wanted the outside input. We never gave him his head, 'didn't let him go free on it. He considers the artist, like, that film director that considers actors, just like, canned goods that you bring on and you wheel off, y'know? He'd like to bury the artist, so the production is the main thing. But, we didn't allow him to do that. So, on that level it was very good, 'cause we used what we considered was his amazing ear for pop music and sound.”

John Lennon's girlfriend May Pang recalled what the scene was like in L.A. during the 1973 Spector-produced sessions for Lennon's Rock N' Roll album: “Spector would drink a bottle of Courvoisier a night at the studio. Phil was not an easy person to work with. (In) '71, '72 he was more tolerable, because John was a co-producer — he had more control. When we did the '73 (sessions) and we decided we wanted to go and do the Rock N' Roll album, and he managed to get Phil, John was happy, 'cause he had just gotten off of the Mind Games (album) and he was just happy to say, 'I just want to continue on. I wanna do a rock n' roll album of songs that shaped my life.'”

In 1980, Spector helped produce the Ramones album End Of The Century. During a late-'90s interview, we asked the late-Joey Ramone for his impression of Spector: “I guess working with Phil Spector was pretty nuts. I would say that's one of the craziest experiences we had. He was very insane (laughter), totally deranged, and everything you heard is true. Y'know, it was his idea to work with us, and, y'know, we tried it. Y'know, it was like an experiment — like Frankenstein.”

In 2007 a video of Phil Spector appeared on the syndicated news program Inside Edition. On the tape Spector explained that it was physically impossible for him to have killed Clarkson: “The deceased was standing when she took her own life and she was five-eleven and she would've been six-feet-two with heels on, which she was wearing at the time of her death, and that the gun was in a downward position. I am five-foot-five. It would've been physically impossible for me to have administered the death wound to her in any shape, way, or form.”

Shortly before his 2011 death, legendary music mogul and longtime Spector acquaintance Don Kirshner spoke about Spector's musical legacy: “What can I tell you? He was a great talent. He lived on my couch, he lived in my office. His talent really has nothing to do with whatever comes out in the Lana Clarkson case.”

Backstage at the 2008 Rock and Roll Hall of Fame, the Ronettes' Nedra Talley spoke about her former producer's then-ongoing murder trial: “I pray that the truth will come out and that we all need God on our side. Right now, I would not want to be in that position — I wouldn't want it for anybody. So I don't gloat, I feel nothing. I thank him for the fact that he gave us a couple of really good songs and so I can't say anything that way. But like I said, God knows the truth and I will have to trust our system to bring the truth out.”