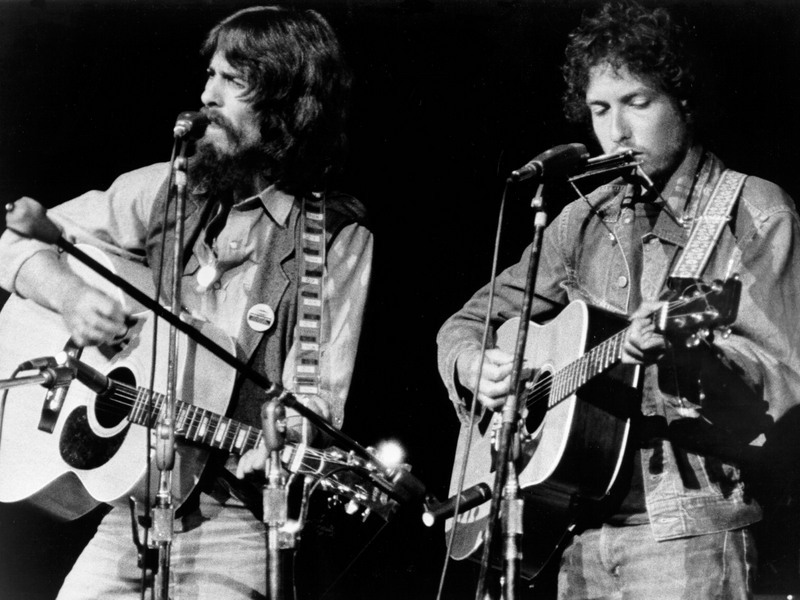 With no advance notice, Bob Dylan has dropped the copyright release The Bob Dylan — 50th Anniversary Collection 1970. The triple-disc set was released as an extremely limited edition via the UK store Badlands. The site posted a disclaimer that only one copy per customer was allowed. The already sold-out set features material recorded during and around Dylan's legendary New Morning album — including his heavily bootlegged May 1st, 1970 session with George Harrison on lead guitar.

Each year, Dylan — and several other major artists — bypass European copyright law by laying claim on the recordings as they fall out of copyright. The copyright law was amended in 2011 from 50 years to 70 years, protecting recordings issued post-1963 until 2033.

Although Bob Dylan didn't start giving serious interviews until the mid-1970's, he always allowed photographer friends to chronicle his on and off-stage life. After Dylan's infamous 1966 motorcycle accident, photographer Elliot Landy had unprecedented access to Dylan as a family man. Landy, who eventually took the cover photo for Dylan's 1969 Nashville Skyline album, told us about a typical visit with Dylan and his young son Jesse in 1968: “His son Jesse was on a little tricycle in the house and he was trying to ride around from one room to the other and he got stuck someplace — between a table and a doorway or something — and he starts going, 'Oh. . . ' — and I would have gone just to pick up the bicycle and get him out of it. And Bob said, 'C'mon, Jesse, you can do it. You can do it. C'mon, keep trying. That's it — keep trying,' y'know? And he just urged him on until Jesse got free of the obstacle.”