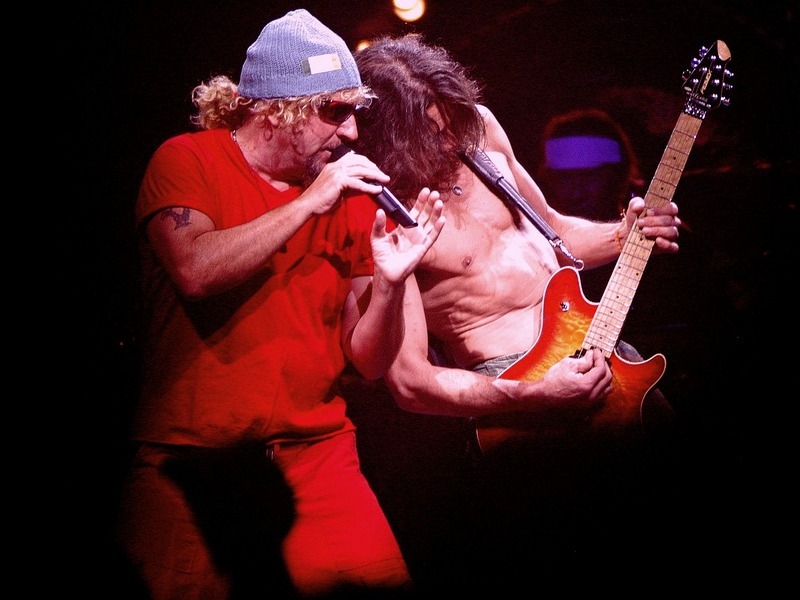 Sammy Hagar & Eddie Van Halen Made Peace Before He Died

Sammy Hagar revealed that he and Eddie Van Halen had made peace with each other prior to the guitarist's death this past October 7th. Blabbermouth reported Hagar revealed through a note relayed to Howard Stern, that the pair — who had been on the outs for over 15 years — had recently resumed communication. Hagar wrote, “Eddie and I had been texting, and it's been a love fest since we started communicating earlier this year. We both agreed not to tell anyone, because of all the rumors it would stir up about a reunion, et cetera, and we both knew that wasn't gonna happen. But he also didn't want anyone to know about his health. He stopped responding to me a month ago, and I figured it wasn't good. I reached out one more time last week, and when he didn't respond, I figured it was a matter of time. But it came way too soon.”

Eddie's widow, Janie Van Halen posted a tribute to Eddie on her Instagram page, which read:

My husband, my love, my Peep,

My heart and soul have been shattered into a million pieces. I never knew it was possible to cry so many tears or feel such incredible sadness. Our journey together has not always been an easy one but in the end and always we have a connection and love that will always be. Saying goodbye is the hardest thing I have ever had to do so instead I say so long, I will see you again soon in a place with no pain or sorrow. Please watch over Kody and I. We love you and miss you so very much.

Valerie Bertinelli posted a photo of the couple with their then-infant son, Wolfgang, along with a message:

40 years ago my life changed forever when I met you. You gave me the one true light in my life, our son, Wolfgang. Through all your challenging treatments for lung cancer, you kept your gorgeous spirit and that impish grin. I'm so grateful Wolfie and I were able to hold you in your last moments. I will see you in our next life my love.

The tributes are still pouring in from friends and fans:

Billy Joel: “Shocked to hear of the death of the great Eddie Van Halen. He was a consummate musician and an extraordinary virtuoso on the guitar. He leaves a giant footprint and an irreplaceable void.”

Angus Young: “Eddie was a guitar wonder, his playing pure wizardry. To the world of music he was a special gift. To those of us fortunate enough to have met him, a very special person. He leaves a big hole in a lot of hearts. To the Van Halen family my heartfelt sympathies.”

Quincy Jones: “RIP to the GREAT @eddievanhalen. Even though it took a couple calls to convince U it was actually me on the phone 🙂 U killed it on Thriller, & your classic solo on Beat It will never be matched. I’ll always smile when I think of our time working together. Eternal love and props.”

Tommy Shaw: I was heartbroken to hear the news of EVH’s passing. A genius musician and quite an interesting personality. I first met him when we shared a dressing room with them in Germany for a TV music show there in the ‘70s. Van Halen was new and ascending, and I observed him practicing his amazing guitar riffs in a style I’d never seen before. I later ran into him in Hamburg after I’d gotten my hair cut short, and I was wearing a green v-neck sweater I’d bought in a shop there. He took one look at me and said, 'You look like a f***ing accountant!' He was right! We ran into him years later at a birthday party of a friend at Le Dome in West Los Angeles and he took a photo with my wife Jeanne, hung out with party guests, and that was my last encounter. His style influenced a new generation of shredders. It was sad to hear about his health struggles, but always seemed to overcome them. Thank you Eddie for the incredible gifts of your music and live performances. History and music fans will remember and cherish you with the highest esteem.”

Joe Elliott: “I saw VAN HALEN destroy (BLACK) SABBATH at the Sheffield City Hall in 1977… Eddie was a big part of that, having essentially reinvented guitar playing just like Jimi Hendrix had done a generation earlier….l had the pleasure of being on the same bill as VAN HALEN 7 years ago when KINGS OF CHAOS were on the same bill at the Stone Music Festival in Australia. I'm happy to say that his playing that night was as good as it's ever been, he certainly shook things up when he came on the scene…. Rest In Peace Eddie..”

Viv Campbell: “I distinctly remember the first moment I heard Eddie play. A good friend, also a guitarist, had just bought the first VAN HALEN album and came by my house and told me that I urgently needed to hear this. He wasn't wrong; it was a moment that redefined everything that I thought was possible about playing the guitar. The goalposts had just been moved. I stayed up all that night trying to learn from Eddie. Many, many decades later, and I'm still learning from Eddie.”

Michael Schenker: “You were the BEST of our generation. I am so sorry you have gone. My condolences to your loved ones. I miss you, but like my partner said to me: 'You have gone to a better place.' Rest In Peace, my friend. I will always remember and treasure when we met in Germany in the late '70's when I came with the SCORPIONS to see your show. Can't never forget the lovely times we spend together in your dressing room. My highest respect for your incredible guitar playing, sound, melodies, your sense of rhythm, your amazing entertaining abilities and everything else. You were a complete, fantastic, all round amazing guitarist. God bless you and keep you in good care.”

Julian Lennon: Heartbroken to hear about the passing of one of my all time favourite musical Heros (sic)…. Whom I met many moons ago, after a Van Halen concert, backstage, where we hugged like long lost brothers, and sat in the dressing room shower (Fully Clothed, I might add!) drinking Jack Daniels, straight out of the bottle, and talked about music & what the future might hold… Then years later, I used to live above Eddie, in Los Angeles, on Coldwater & Mulholland, where I used to hit Golf balls onto the roof of his house, for sh**s & giggles… I had always hoped to rekindle that friendship, sadly that will never happen now, but he will certainly live on, in the legacy of the music he left behind… R.I.P. Eddie… My Heart goes out to his family & friends.”