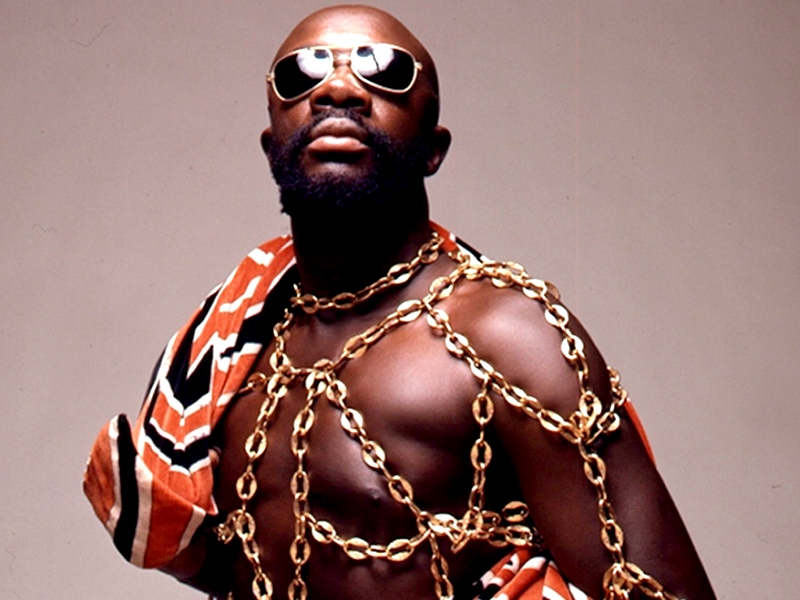 Today (August 20th) would have been R&B pioneer Isaac Hayes' 78th birthday. Hayes is best known for his years as a writer, performer, and producer for the legendary Stax label, having composed, along with his partner David Porter, Sam & Dave's landmark '60s hits “Hold On! I'm Comin',” “When Something Is Wrong With My Baby,” “You Don't Know Like I Know,” “Soul Man,” and “I Thank You,” among other hits, including Carla Thomas' “B-A-B-Y.”

As a solo performer, Hayes scored hits with his cover of Dionne Warwick's “Walk On By,” and “Theme From Shaft,” which topped the charts in 1971. “Theme From Shaft” earned Hayes two Grammys, and an Oscar for Best Song In A Motion Picture — making him the first African-American songwriter to win an Academy Award.

In 2005, Hayes published the cookbook, titled Comfort Foods: A Collection Of Recipes For Eating Well With Chronic Kidney Disease, which was dedicated to his good friend, the late Barry White. That same year, Hayes welcomed his fifth child, a son named Nana Kwadjo Hayes.

Shortly before his death, Isaac Hayes shed some light on his early days, which informed the work he did and his life choices very early on: “It was poverty. Now mind you, it was not easy. There were as lot of dark days, man, when no food — go to school hungry, come back home hungry. I was a high school dropout in the ninth grade, because when I reached puberty, you started noticing your clothes and stuff, and you're noticing girls. And I didn't want to go through the humiliation, so I dropped out.”

Eventually, Hayes was convinced to return to school, and he won seven music scholarships when he graduated. Isaac Hayes admitted to us that his poor upbringing could have easily led to a life of drugs and crime, and that it was music which brought him a better life: “I shudder to think about the possibility I could have taken a turn and my life would have been totally different and gone another way. . . because when you, when you are stretched out in poverty and you're trying to survive, there are a lot of tempting alternatives for you. But you have to stay focused and determined and not take that wrong turn. And regardless of what you have to go through, there's a light at the end of that tunnel and it will get brighter. And that's what happened to me, and that's why I feel like if I survived that, I can survive anything else that life has to throw at me.”

Isaac Hayes told us that he never once took his talent or good fortune for granted: “It feels great. It feels good. Every day I wake up, I say, 'Thank God,' because I could have been turned out to pasture a long time ago, but somehow I've managed to stay within the race. Stay in the race, you're going to win some. You stay on the circuit, you're going to win some, and that's about longevity.”

In January 2006, Hayes checked himself into a Memphis hospital after suffering a stroke. Shortly after that, Hayes backed out of his long-standing role as Chef on South Park, after the show poked fun of the Church Of Scientology, of which he was a member. That June, Hayes canceled a series of concert dates due to an unspecified heart condition. Hayes soon rebounded and actively returned to performing, and was among the first acts to sign with Concord Records' revived Stax label.

In 1992 Hayes was crowned an honorary king of Ghana's Ada district. Isaac Hayes was inducted into the Rock and Roll Hall of Fame in 2002.