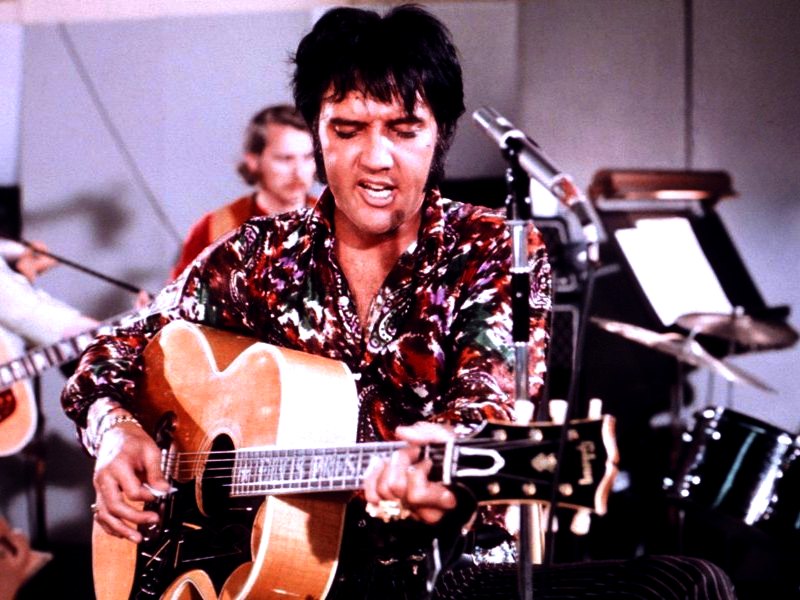 Sunday (August 16th) marks the 43rd anniversary of the death of Elvis Presley. Elvis died of a heart attack on August 16th, 1977 at his Graceland mansion in Memphis, Tennessee. He was 42-years-old. Fans are participating in a modified “Elvis Week” schedule in and around “The King's “Graceland mansion, which complies fully with recommended government protocols on COVID-19 — including a socially distanced candlelight vigil.

Elvis would have turned 85 back on January 8th, and unbelievably, 2020 marks the first year that Elvis Presley has been gone longer than he was alive.

Tragically, this past July 13th, Elvis and Priscilla Presley's only grandson, Lisa Maria Presley's child, Benjamin Keough. Keough shot himself with a shotgun at his home in Calabasas, California. He was 27-years-old.

Set for release on November 20th is From Elvis In Nashville, the four-CD/digital collection presenting the definitive chronicle of Elvis Presley's legendary 1970 marathon sessions with the “Nashville Cats.” The new collection features 40 undubbed, newly mixed classic recordings, and two discs of rare and unreleased outtakes.

Highlights on From Elvis In Nashville include: “Bridge Over Troubled Water,” “Faded Love,” “Make The World Go Away,” “Just Pretend,” “Funny How Time Slips Away,” “The Next Step Is Love,” “I Washed My Hands In Muddy Water,” “Twenty Days And Twenty Nights,” “I've Lost You,” “I Was Born About Ten Thousand Years Ago,” “The Fool,” “It's Your Baby, You Rock It,” “Stranger In The Crowd,” “You Don't Have To Say You Love Me,” “Just Pretend,” “Patch It Up,” and more.

Filmmaker Baz Luhrmann has tapped actor Austin Butler to portray Elvis Presley in the still-untitled upcoming feature co-starring Tom Hanks as “The King's” infamous manager Col. Tom Parker. Luhrmann said in a statement announcing the casting update: “I knew I couldn’t make this film if the casting wasn’t absolutely right, and we searched thoroughly for an actor with the ability to evoke the singular natural movement and vocal qualities of this peerless star, but also the inner vulnerability of the artist.” The upcoming movie will focus on Elvis and Col. Parker's 20-plus-year relationship.

Col. Tom Parker, who was born on 1909 in the Netherlands, was a carnival barker before becoming Elvis' manager in 1954 with the Presley estate finally forcing him out in 1983. Parker died of a stroke in 1997.

The 50th anniversary of Elvis' watershed 1969 American Studios recordings and his Las Vegas comeback were celebrated last year with the release of the massive, 11-CD box set of his performances at the International Hotel in Las Vegas, titled Live 1969 and the special two-LP Live At The International Hotel, Las Vegas, NV – August 26, 1969. The vinyl release features Elvis' complete set from August 26th's Midnight show.

Also released was American Sound 1969 featuring 90 rare and previously unreleased outtakes from “The King's” American Sound Sessions in Memphis, including the classics “Suspicious Minds,” “In The Ghetto,” “Kentucky Rain,” “Don't Cry Daddy,” and “Rubberkneckin',” among many others.

2018 saw the release of Elvis Presley – Where No One Stands Alone, a collection featuring “newly-recorded instrumentation and backing vocal contributions from music legends who'd performed on-stage and/or in-the-studio with Elvis. It also includes a reimagined duet with Elvis and his daughter, Lisa Marie Presley, on the album's title track and spiritual touchstone.”

2016 saw the release of the Way Down In The Jungle Room collection, which compiled Elvis' final recording sessions. “The King” had temporarily transformed his legendary Graceland den — dubbed the “Jungle Room” — into a state of the art recording studio, and it was there over two sets of sessions in February and October 1976, that he recorded his final studio masters for RCA. The sessions featured the members of his longtime touring band — including guitarist James Burton, drummer Ronnie Tutt, keyboardists Glenn D. Hardin and David Briggs, bassists Jerry Scheff and Norbert Putnam, along with backing vocals by J.D.. Sumner & The Stamps. The original masters found their way onto Elvis' two final albums, 1976's From Elvis Presley Boulevard, Memphis, Tennessee and 1977's Moody Blue. Highlights from the sessions include: “Moody Blue,” “Way Down,” “Hurt,” “Pledging My Love,” “She Thinks I Still Care,” “It's Easy For You,” “Danny Boy,” “Blue Eyes Crying In The Rain,” and “Bitter They Are, Harder They Fall,” among others.

In 2010, Elvis's personal physician Dr. George Nichopoulos — infamously known world wide as “Dr. Nick” — published his memoirs about his decade over-prescribing drugs to Elvis in the memoir, The King And Dr. Nick. In 1980, Nichopoulos, who died in 2016 — and over the years has been rated no better than a dope dealer by Elvis' family, friends, and legion of fans — was indicted on 14 counts of over-prescribing drugs to Elvis and Jerry Lee Lewis, as well as 12 other patients. According to court records, in 1977 — the year Elvis died at age 42 — Nichopoulos had prescribed over 10,000 doses of amphetamines, barbiturates, narcotics, tranquilizers, sleeping pills, laxatives, and hormones for Elvis.

In an interview with The Daily Mail, Nichopoulos revealed that Elvis was suffering from, “arthritis, gout, a fatty liver, an enlarged heart, migraines, constipation, and a colon swollen to twice its normal size.” Elvis was also reportedly battling glaucoma — pressure on the eyeball — as well as hepatitis, an enlarged liver, and Cushing's Syndrome — a hormonal disease that causes bloating — which was most likely was attributed to the herculean doses of hard dope he took on a daily basis.

“Dr. Nick” went to great lengths over the years to dodge the blame of “The King's” death by stressing that the majority of Elvis' drugs were gotten from sources other than him — especially the drugs that were found in his system post-mortem: “My recollection is that there were four drugs found that I had prescribed out of the 12, 13, or 14 that were found in his body. And the others came from who knows where; they may have been from other doctors or other friends.”

Dr. George Nichopoulos' prescriptions for Elvis Presley during the final 32 months of his life:

Robert Plant recalled the night he and Led Zeppelin met Elvis back in 1974: “We talked with Presley for about three hours, it just went on and on and on. And we were talking about the root — where did it come from, and it came from him. And he still got it. He still was into that Delta (music) thing — y'know, 'Good Rockin' Tonight, y'know, all that stuff that got him going in the first place. But he also knew — and he had a great sense of humor — and he knew that he was locked in this self-parody.”

Paul McCartney explained that although Elvis' health problems were no secret by 1977, his death was still heartbreaking for his original fans: “It was. . . it was still a bit of a shock with Elvis — 'Oh my God — there's an era ended,' that sort of thing — 'Oh, we'll never see him again, y'know, fat or thin.'”

Just prior to his own untimely death in 1980, John Lennon gave his typically cynical take on the death of his original hero and greatest inspiration: “When Elvis died, people were harassing me in Tokyo for a comment. Well, I'll give it now: He died when he went in the army (laughs). That's when they killed him, that's when they castrated him, so the rest of it was just a living death.”

Pete Townshend says that the enormity of pressures surrounding Elvis are what ultimately led to his death at such a young age: “That's a terrible tragedy when you think what a decent kind of guy he seemed to be when you read the stuff. Y'know he came to pieces at the end. And it's easy to blame Vegas, but it wasn't about Vegas, it was just about the load.”

Keith Richards credits Elvis for making rock a truly colorless art form: “The beautiful thing about Elvis was that, wow, he's just sort of turned everybody into everybody it doesn't matter now — 'Is the guy black or white' anymore. . . Y'know, and maybe even you can do it!”

Daughter Lisa Marie Presley was asked if since becoming a recording artist in her own right, her bond with her father has gotten stronger: “I think so, in that, I mean, I've always had the most, y'know, he's been, like, untouchable in my eyes in terms of idolized for what he did. But I think me going through — on a much less scale — what he had to go through, I think I have more, I'm more locked into him on that realm.”

Close friend Tony Orlando recalled pleading with Elvis to not let his fame cut him off from the world: “I remember saying to Elvis one day, y'know, I said, 'You are missing out on life, man. Because I just saw Muhammad Ali in front of the Stage Delicatessen; he was outside doin' magic tricks for kids and signing autographs for kids and he's enjoying his fame.' I said, 'Elvis, you never get out. You're stuck in this gold record cell. C'mon, at least I get out!'

Elton John caught Elvis Presley in concert at Washington, D.C.'s Capital Centre just over a year before his death and after meeting the man, he walked away traumatized by the state his hero was in: “‘Meet’ would probably be an extravagant word. I shook hands with him backstage at a concert in Washington. My mother was there and it was very sad. And I thought, y’know, maybe even during the performance. . . I thought there might be (laughs). . . It was so, really tragic. I mean, really. . . so heavy — there was no eyes there. And yet he still had the most incredible charisma and magic, even though he was like a zombie before. But to meet him — even to see him was a great honor.”