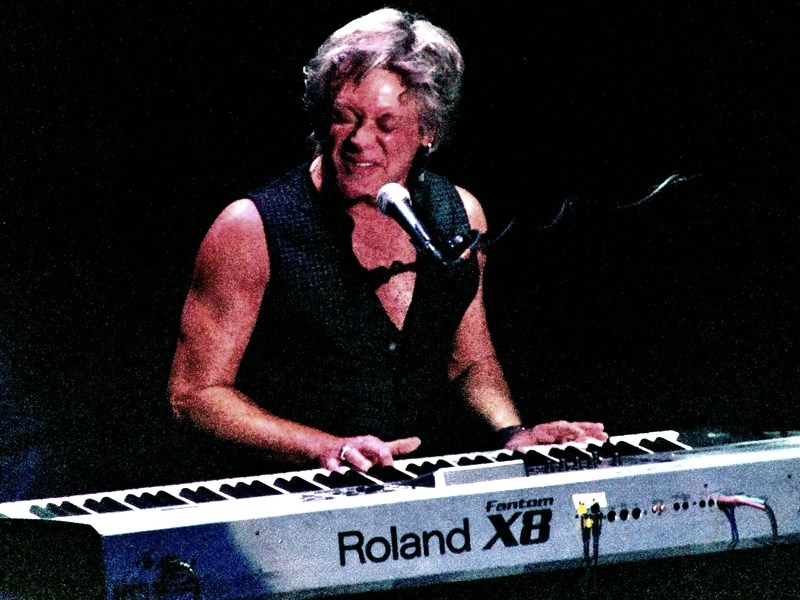 Happy Birthday to Eric Carmen, who turns 71 today (August 11th). Carmen is best remembered for writing and singing lead on the Raspberries' string of power pop hits, including “I Wanna Be With You,” “Let's Pretend,” “Tonight,” “Overnight Sensation (Hit Record),” and their 1972 Top Five signature hit “Go All The Way.” Carmen went on to solo success with 1975's “All By Myself,” and “Never Gonna Fall In Love Again,” as well as writing Shaun Cassidy's Top Ten hits “That's Rock 'N' Roll,” and “Hey Deanie.”

In the 1984 he co-wrote Ann Wilson and Mike Reno's duet “Almost Paradise” from the Footloose soundtrack, sang 1988's “Hungry Eyes” from the Dirty Dancing soundtrack, and scored his last Top Ten hit later that year with “Make Me Lose Control.”

Out now is Pop Art Live, the latest Raspberries live collection that chronicles the band's initial reunion show on November 26th, 2004 at Cleveland's House Of Blues. Highlights on the set include such Eric Carmen classics as “Go All The Way,” “Let's Pretend,” “I Wanna Be With You,” “Tonight,” “Overnight Sensation (Hit Record),” “Ecstasy,” and more. Also included are covers of the Who's “I Can't Explain,” and a triple shot of Beatles gems — “Ticket To Ride,” “No Reply,” and “Baby's In Black.”

Recently released is The Essential Eric Carmen. The collection, which is the first double-disc retrospective of Carmen’s 45-year career, contains classic tracks from his solo years, his major works with the Raspberries — and even a cut from his pre-‘Berries band, Cyrus Erie. Along with the hits comes his most recent track, called “Brand New Year,” featuring backing from the key members of his hero Brian Wilson‘s longtime band. His Raspberries classic “Go All The Way” was featured on the soundtrack to the 2014 hit summer movie, Guardians Of The Galaxy.

That same month, Carmen served 30 days in Ohio jail after pleading no contest to drunken driving and failing to control his car in 2014. This was the second DUI arrest for Carmen, who lives in the Cleveland suburb of Gates Mills. He was arrested on September 9th, 2008 after crashing his SUV into a fire hydrant. According to the charges, Carmen's blood-alcohol level was nearly three times the state's legal limit.

Eric Carmen says that it took a good 20 years for him to understand how influential the Raspberries turned out to be for rock's following generation: “Years ago I was in L.A. in the mid-'80s and somebody said, 'Axl Rose is a huge fan of yours. 'And I went, 'Axl Rose is a fan?' He's a huge fan! And it would start to come out — we have one guy on our road crew that has worked for Van Halen for 20 years, and before that he worked with all these, y'know, hair bands and metal bands and whatever, and he said they were all fascinated; they wanted to know all (the) Raspberries stories. And I said, 'Who?' — the guys in Poison. . . And I thought that's amazing that these guys like us, that they got it.”

Carmen, who was the Raspberries' principle songwriter, says that the band's songs have lived on because it was honest music: “What the Raspberries were about was, y'know, I came in as a writer saying, 'How do I play to everyone's strengths here? What is it that we can do that's different from everyone else, and go for that.”

Eric Carmen says that throughout the years he's come to understand what the 'Berries meant to the '70s generation: “David Wild who is now one of the editors of Rolling Stone and I were talking one day. And he confessed to me that he was a little too young for the Beatles, and that when he saw the Raspberries on Don Kirshner's Rock Concert one time, he said, 'You were my Beatles.'”

Eric Carmen recalls how he and Arista Records president Clive Davis were the only people who believed that “All By Myself” should be released as his debut solo single: “They had a testing center back in those days in Dallas, or something, where people would go into an auditorium on Saturday mornings and they'd get these different age groups and they'd wire up so you could tell demographic, and age, and sex, and see how a song struck everybody — and then you would get, like, a meter reading. They tested 'All By Myself' and it came back absolutely a total loser — not a hit. 98 percent say forget it. And then Clive and I went. 'Yeah, they're wrong.'”

Back in 2007 the Raspberries released their first-ever live album The Raspberries Live On Sunset Strip. The set features a bonus DVD of five songs, as well as a CD including the band's biggest power pop favorites, including “Tonight,” “Let's Pretend,” “Ecstasy,” “I Wanna Be With You,” and “Go All The Way,” along with covers of the Who's “I Can't Explain” and the Searchers' “Needles And Pins.”

Bruce Springsteen, a longtime Raspberries fan, wrote the album's liner notes to The Raspberries Live On Sunset Strip. Most of the hardcore power pop material that Springsteen recorded between 1977 and 1980 wasn't released until the 1998 archival box set Tracks, with a few more making their way onto 2010's The Promise collection. Springsteen has gone on record as saying that Carmen's early-'70s work with the Raspberries played a seminal role in his rediscovery of dual guitar-based rock. Carmen says that the influences at the time were mutual: “The first time I met Bruce, y'know basically I'm a shy guy, and someone brought me backstage at one of Bruce's concerts and I had no idea what to say to him, 'cause I'm always on the other side. And he looked at me and I think he's a shy guy too, and he looked at me and he said, 'I really wore that Raspberries' Greatest Hits album out.' And I said, 'Yeah, I wore out Born To Run.'”