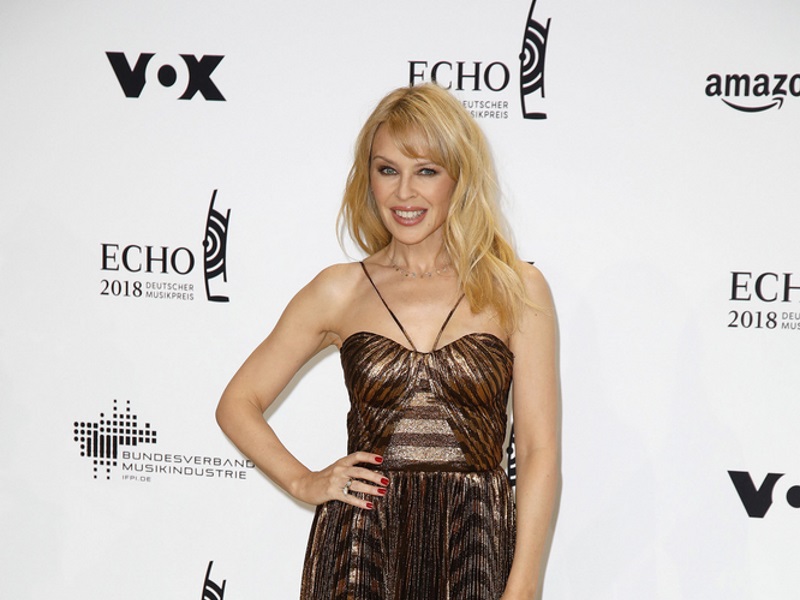 KYLIE MINOGUE TO DROP NEW DISCO SONG THIS WEEK: Kylie Minogue will make her return this week with “Say Something,” the first single to be lifted from her upcoming new album Disco. Minogue, who released her last record Golden in 2018, revealed back in May that her upcoming 15th record would contain “grown-up disco.” The project’s official artwork is now circulating via social media after appearing on Amazon. “Say Something” will be released Thursday.

PREGNANT KATY PERRY BARES BABY BUMP IN A CROP TOP: Katy Perry is showing off her baby bump while promoting her upcoming album Smile. The 35-year-old pregnant singer took to her Instagram account to share photos of herself wearing a crop top from her official store. Katy tagged the location of the photos as Jumbo’s Clown Room. If you purchase the crop top for $40.00 on Katy’s store, you also get a digital copy of Smile, due out August 14th.

POST MALONE HOPES TO UPLIFT WITH NEW ALBUM
Post Malone has been in his Park City, Utah mansion working on a new album which he hopes will be able to lift people’s spirits. He told WSJ Magazine, “I’m working on an album now. There’s so much to say in these times that will give people hope and hopefully uplift people’s spirits. Because it’s a dark time in America. It’s a dark time in the world. Honestly, for a songwriter to be in the house all day is a blessing and a curse. In the darkest of times I’m just trying to make something beautiful out of it.”

LOGIC SIGNS SEVEN-FIGURE EXCLUSIVE STREAMING DEAL WITH TWITCH: Logic has signed an exclusive seven-figure deal with streaming giant Twitch. Logic broke the news in an interview with The Verge just days after he announced that he will be retiring from music following the release of his last album, No Pressure, later this week. Logic said it was the perfect fit for the self-professed nerd. While the deal between Logic and Twitch is new, the rapper has been streaming on the platform since 2016. He has amassed over 73,000 followers and more than 1.5 million views. Logic debuted his album early on Twitch for his first stream on Tuesday, three days before its official drop. He’ll take to Twitch for streams weekly and feature a mix of studio sessions, AMAs, gaming and special guests, Twitch said.

BTS, MILEY CYRUS, MORE JOIN 2020 IHEARTRADIO MUSIC FESTIVAL: BTS, Miley Cyrus, Coldplay and more have been announced for the 2020 iHeartRadio Music Festival, scheduled for September 18-19. Kane Brown will also perform with Khalid, Keith Urban, Migos, Thomas Rhett, Usher and more as special guests. The virtual concert will also feature unique collaborations and surprise performances. Remote performances will be filmed on stages in Los Angeles and Nashville. Artists will be discussing backstage how the COVID-19 pandemic has affected them. Fans will be able to introduce artists, enjoy virtual meet and greets and have the chance to appear in a special fan video wall. The 2020 iHeartRadio Music Festival will be presented live on The CW App and on CWTV.com. The performances will also be presented on The CW on September 27- 28.