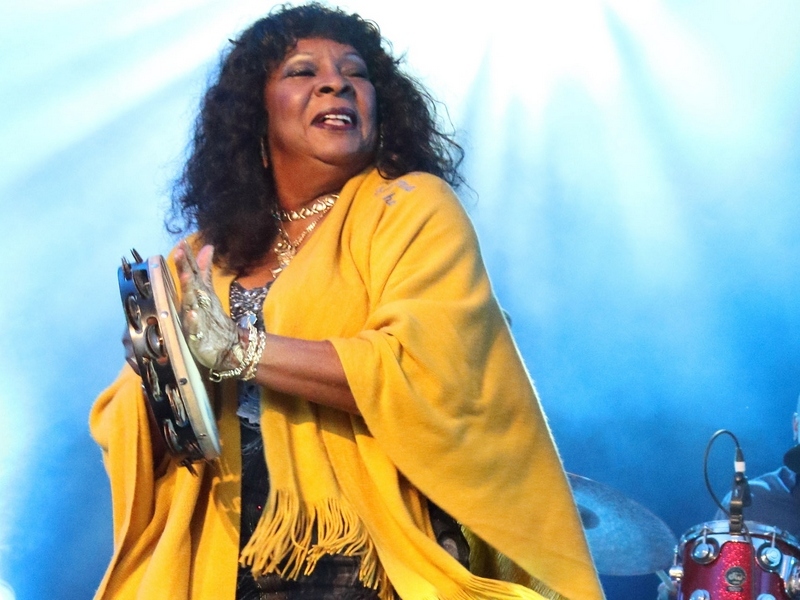 Happy Birthday to Motown legend Martha Reeves, who turns 79 on Saturday (July 18th)!!! Martha Reeves & The Vandellas are best remembered for their string of 1960's hits including “Dancing In The Street,” “(Love Is Like A) Heatwave,” “Nowhere To Run,” and “Jimmy Mack.” In 2016, Reeves spoke about her emotions at hitting 75, telling The Detroit Free Press: “A lot of the Motown artists didn't reach the age of 75. So I feel like I'm a survivor. Life has been so good to me, and people have been so kind. We owe a lot of our fame to the acceptance of Detroiters — people who came to the 20 Grand and the Fox for three and four shows a day, stood in those lines, and let us rehearse on them until we could go to (national) theaters.”

From 2005 to 2009 Reeves held a seat on Detroit's city council. One of the many plans that she proposed for the city was for Detroit to erect statues for such local artists as Aretha Franklin, the Temptations, the Supremes, and her own group, Martha Reeves & The Vandellas. In 2006, the group's 1964 hit “Dancing In The Street” was included on the Library of Congress' National Recording Registry List.

Reeves credits the success of Motown as being one of the greatest collaborative efforts in rock n' roll: “It was like a collection of all of God's most talented here in Detroit. It took the Marvelettes making '(Please) Mr. Postman' to make people appreciate what Martha Reeves and the Vandellas did when we first sang 'Come And Get These Memories' and 'Heatwave.' Then it took our music with Holland-Dozier-Holland to make them understand how to produce a group like the Supremes and have ten Number Ones in a row (sic).”

Martha Reeves still considers her 1963 hit “Heat Wave” as having one of the most interesting time signatures of all the Motown standards: “'Heat Wave' is and extension of the Charleston days. The beat is reminiscent of what had happened in the past, and it was a collection of thoughts from (songwriters) Holland-Dozier-Holland.”

Martha Reeves says that Motown made a deliberate effort to have their music bridge the gap between black and whites in America's turbulent '60s: “When we first recorded, there was no race issue. We made music for the voice and the sound of young America. There was a point when Berry (Gordy) realized that there was a white market and he started aiming some of his acts for the white direction and the white image. Because anything that black people do — white people do. We're an American company, and this is America. (Laughs) It's not a 'black America', and the music was aimed at America.”

Reeves told us that she believes that rappers are overshadowing modern day singers and that in this day and age the easiest way to be a performer is through rap and hip hop: “If rappers could sing, I'm sure they would. Rapping is taking over from where legitimate singers can't get an audience. But it's a proving ground, once you're onstage, and once you start communicating with your audiences, you see that you're appreciated as a professional and a legitimate talent.”

Martha Reeves doesn't believe that a label like Motown could ever exist in today's music business: “It will never happen again. A company that's made by one man, to make that many artists and to have that many people discovered. Because we don't trust and love like we used to.”