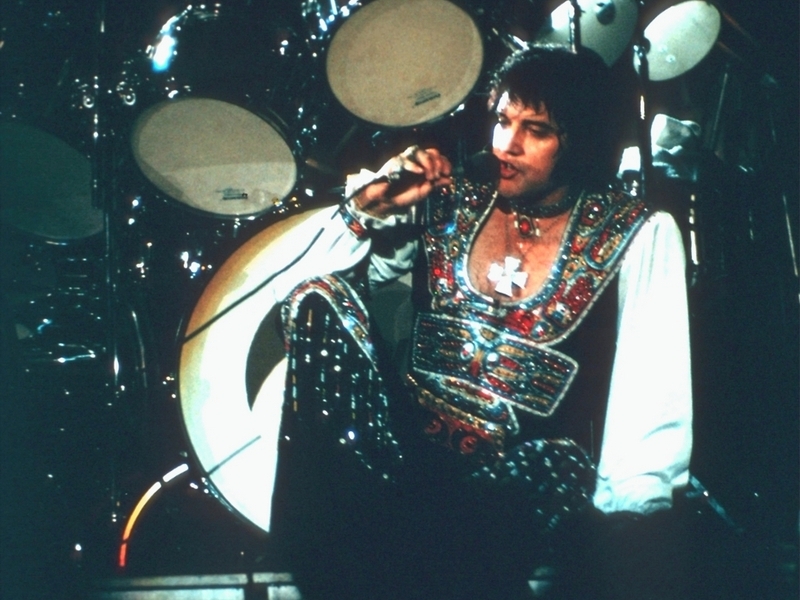 It was 43 years ago tonight (June 26th, 1977) that Elvis Presley performed his last concert. “The King's” final show in Indianapolis at the Market Square Arena was his 55th show of the year. Despite Presley's failing health, and at times sickly appearance, his presence alone was still enough of a draw to sell out shows nationwide. Bootleg copies of Presley's Indianapolis shows have been available on the collector's circuit for years, and prove that Presley's voice was in good shape for the entire show, which was nearly identical to most of his 1977 performances.

Although the following October's CBS-TV special Elvis In Concert has been billed over the years as being Presley's final show, it was actually compiled from shows from June 19th, 1977 in Omaha, Nebraska and on June 21st in Rapid City, South Dakota.

James Burton, Elvis' longtime lead guitarist and bandleader, said that “The King” was never not in full control of his voice — even on his final tours when his health was sometimes in question: “Oh yeah, he knew his range. Oh yeah, absolutely. He had perfect pitch. I mean the guy could be clear across the stage and go into a song he probably hadn't sung in years — it was there. It was such a natural talent, y'know? It was a blessing from God.”

Fleetwood Mac's Lindsey Buckingham credits hearing Elvis in 1956 as the motivating factor that lead him to becoming a musician: “Like many people my age, y'know, I was quite young, I was always interested in music, and I was listening to what we all would refer to as our 'parents' music.' So, when my older brother brought home (the single of) 'Heartbreak Hotel' — it's not a unique story, but it was just a mind-blowing revelation in terms of this kind of explosive spirit that just kind of washed over that whole generation.”

While out on the road in 1972, Elvis Presley talked about how he and his live band leave everything on the stage during every show: “I think it's 'cause we enjoy it — and we constantly enjoy it. Y'know, we do two shows a night for five weeks, but we never let it get old. Every song is like we do it for the first time and that's one of the secrets. We can change 'em around, but even if we do the same songs, they're new and the sound is. . . the feeling is there every time.”

Pete Townshend told us that he believes that the enormity of pressures surrounding the Elvis “machine” are what ultimately lead to his death at such a young age: “That's a terrible tragedy when you think what a decent kind of guy he seemed to be when you read the stuff. Y'know he came to pieces at the end. And it's easy to blame Vegas, but it wasn't about Vegas, it was just about the load.”

Elvis Presley died of heart failure on August 16th, 1977 at his Graceland mansion in Memphis, Tennessee. He was 42-years-old.