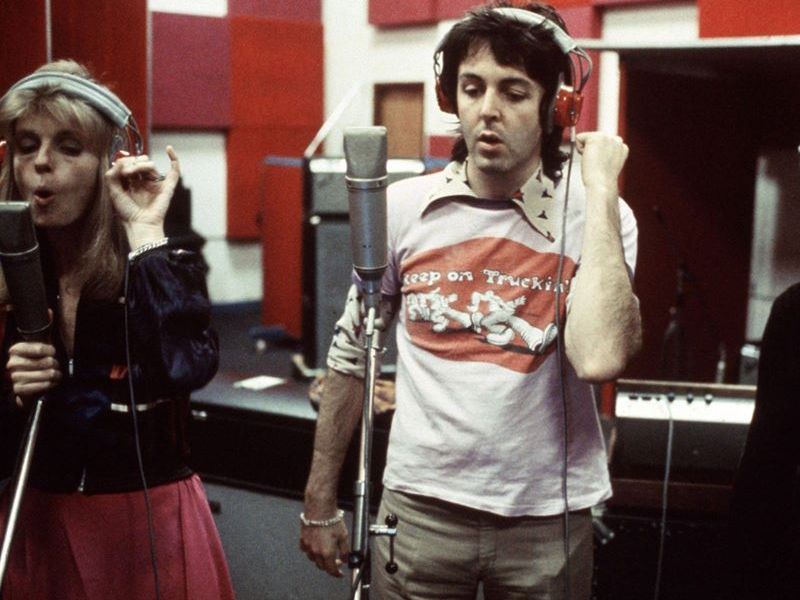 It was 47 years ago this week (beginning on June 2nd, 1973) that Paul McCartney & Wings topped the Billboard singles and album charts with their single “My Love” and their album Red Rose Speedway.

McCartney had formed Wings in 1971 with wife Linda, drummer Denny Seiwell, and guitarist Denny Laine, but the band did not immediately have the same kind of success McCartney had had on his own. Their debut album Wild Life and their first few singles had not climbed any higher than Number Ten on either the album or singles charts, as opposed to other McCartney solo work that had gone all the way to Number One, such as the McCartney album and the 1971 single “Uncle Albert/Admiral Halsey.”

All that changed with Red Rose Speedway. By the time the initial sessions for the album began in March 1972, McCartney had added former Joe Cocker guitarist Henry McCullough to the band's line-up. The album included the hit “My Love,” which stayed at Number One on the singles charts for four weeks, proving that McCartney's new band could be commercially successful. Red Rose Speedway also reached Number One on the album charts, staying there for three weeks.

“My Love” is without a doubt original Wings guitarist Henry McCullough's shining moment from his 19-month stint in the band. Shortly before his 2016 death, he admitted to us that the solo he played was nothing short of divine intervention — taking McCartney completely by surprise: “He says, 'Well, what are ya goin' to play?' I said, 'I don't know.' And this is God's truth, I'm not tellin ya, a word of a lie here. I was in the studio with a 50-piece orchestra, I think it was, to put the solo on. The fired it up and pressed the (record) button and I played the solo from beginning to end. And Paul came out and said, 'Have you been rehearsin' that?' I said, 'I'll be honest with ya, I've never heard that melody or what was played — I never heard any of it before! I said a prayer just before startin' it and set off and that's the way it turned out.'”

McCartney had originally planned Red Rose Speedway to be a double-album, but disappointing sales of Wild Life led his record company to insist on only one disc. The original two-disc set was to feature live material, contributions by the other Wings members, and some experimental tracks.

Denny Laine says that the group went into the sessions thinking they were recording a double-album: “That's why we recorded so much stuff. Maybe they weren't ready for it, didn't think it was gonna do so many. I don't know.”

Renown Beatles author Bruce Spizer says that by judging from the material McCartney left off of Red Rose Speedway, he ultimately did himself a disservice by paring it down to a single record set: “The album sold extremely well because of 'My Love.' Y'know, 'My Love' is this humongous hit. (McCartney thought) 'EMI doesn't want a double album, so let me go ahead and give them the best of the ballads-type approach.' And I think that in doing so he may not have put together the strongest album considering his choices. Oddly enough, I think it would have worked better as a double album. I think this is a case where more would have actually been more (laughs), rather than more is less.”

Beatlefan magazine correspondent Tom Frangione explained that Red Rose Speedway was the album that paved the way for McCartney and Wings' chart domination for the rest of the '70s: “One of his most important records probably is Red Rose Speedway. You've got a Number One single in there with 'My Love,' a real strong track line-up on side one. Some people would argue that side two was kind of trying to re-establish almost like the Abbey Road flavor with the little medley.”

Paul McCartney admits he struggled to get Wings to become a viable force both in the charts and on the road: “It was a struggle trying to put it together after the Beatles. I mean, the Beatles career itself was a struggle, but then having reached those heights, to try and do it over and at the same time bring up a, a young family was quite an interesting human interest story.”

Denny Seiwell, who was the first member of Wings outside of Paul and Linda, feels as though he and McCartney still share a deep musical bond. Despite Seiwell quitting the group on the eve of the Band On The Run sessions, he and McCartney remain close and talk frequently. Seiwell was asked about the chances of him recording with McCartney again after a nearly 45-plus-year hiatus: “I'd do anything to make that happen. I told him anything you want. . . He's one of the most profound influences in my life that took the most profound effect on my life, both positive and negative. At a moment's notice, I would drop everything (to play with him.) Y'know, I think there's a need for Wings to come back.”

McCartney had originally intended for legendary engineer-producer Glyn Johns to work on the record, and although several early tracks were recorded, Johns reportedly quit the album due to problems with McCartney, the band, and the quality of material brought into the sessions. Johns had previously worked with McCartney during the session for what eventually became the Beatles album Let It Be. Johns is best known for his work with such acts as the Who, the Kinks, the Small Faces, the Eagles, Led Zeppelin, and the Rolling Stones, among others.

Red Rose Speedway knocked the Beatles compilation 1967-1970 out from the Number One spot, and was in turn bumped from Number One by George Harrison's Living In The Material World album. Harrison's “Give Me Love (Give Me Peace On Earth)” also replaced “My Love” at the top of the singles charts.

The back cover of Red Rose Speedway featured a message in Braille to McCartney's good friend Stevie Wonder, stating “We Love You Baby.”

Red Rose Speedway was the first of five consecutive Number One albums by McCartney & Wings.

“My Love” was McCartney's fourth biggest solo single, and has frequently cropped up in his live concert setlists, having been included numerous times over the years in the piano sets of his various tours.

The 2DVD + Blu-ray portions of the deluxe are packed with rare and previously unseen footage, including the James Paul McCartney TV Special, interviews and music videos, as well as the never before seen film The Bruce McMouse Show — fully restored and remixed in stereo and 5.1 surround sound.

The package includes a folio containing 14 replica hand drawn original character sketches by Paul and facsimile dialogue sheets for the film, a 128-page book containing many previously unpublished images by Linda McCartney, expanded album and single artwork from the archives and story behind the album — including new interviews with Paul McCartney, and key album personnel — and track-by-track information, written by Amanda Petrusich, five replica handwritten lyric sheets and photo print, a 64-page 'Wings In Morocco' photo book, all housed in a numbered outer slipcase.