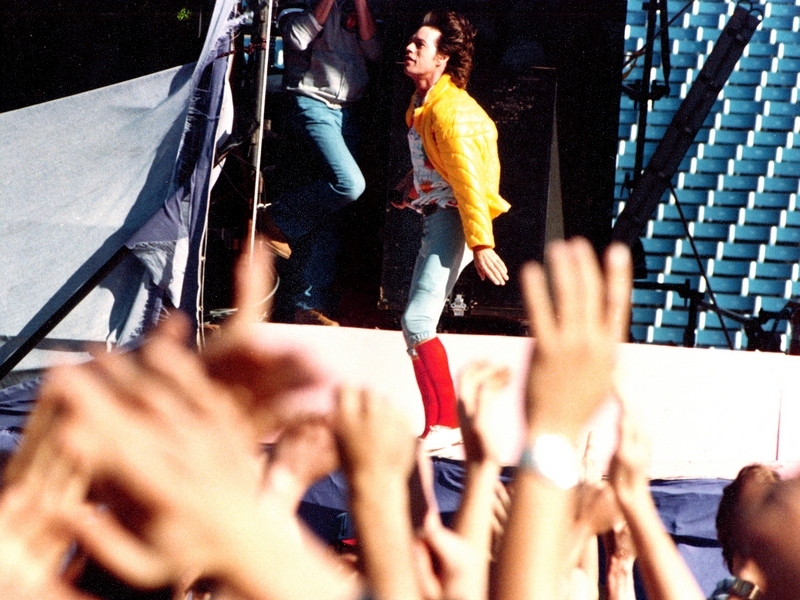 Flashback: The Rolling Stones’ ‘Black And Blue’ Hits Number One

It was 44 years ago this week (May 15th to May 27th, 1976) that the Rolling Stones' Black And Blue topped the Billboard 200 album charts for the first of four nonconsecutive weeks. The album, which was the band's 6th U.S. chart-topper, was recorded at Munich's Musicland Studios like its predecessor, It's Only Rock N' Roll. With the defection of guitarist Mick Taylor just before the album began production, the band used various players to fill in for Taylor — with the sessions serving as auditions to fill his role on a permanent basis.

Among the players that sat in during the 1974 and 1975 sessions were Jeff Beck, Harvey Mandel, Wayne Perkins, and Taylor's eventual replacement, Ron Wood — who played guitar on only two tracks, added vocals to several others, and became an official member just prior to the album's release. Billy Preston, who was touring with the Stones during this period, served as the album's primary keyboardist — although longtime Stones sideman Nicky Hopkins was also featured.

The album's lead single “Fool To Cry” returned the Stones to the U.S. Top 10 after a two-and-a-half year absence, although it's followup, Black And Blue's lead track, “Hot Stuff,” stalled at a disappointing Number 49.

None of the eight tracks recorded for Black And Blue featuring Jeff Beck made their way on to the album. The only track featuring Beck, “Slave” — originally titled, “Black And Blue Jam,” and alternately, “Vagina,” which also featured backing vocals by Pete Townshend — was eventually remixed and released on 1981's Tattoo You collection, along with another Black And Blue outtake, “Worried About You.”

Although he had appeared on 1974's It's Only Rock N' Roll and toured with the band in 1975, Ron Wood says that joining the Rolling Stones in the mid-'70s was hardly smooth sailing: “Well, it was a fragile ship when I joined because they'd been through many ups and downs, and there was kind of a grey cloud.”

Bill German, the author of Under Their Thumb — How A Nice Boy From Brooklyn Got Mixed Up With The Rolling Stones And Lived To Tell About It, and the editor of the legendary Stones fanzine Beggars Banquet, recalled 1976's Black And Blue as being an under-the-radar treasure: “The first thing I remember is getting it and (thinking) there isn't enough songs on it . (Laughs) There's only eight songs, and then I heard that it was kind of patched together — y'know that they didn't have one singular (lead) guitarist on there. And it's like, 'What — Who are these other guys? I know that Ron Wood was touring with them and he's, like, a member of the band now, but why isn't he on this track or that track?' But I really did enjoy a lot of the songs on there. For me, y'know, it was my first taste of reggae — they were doing 'Cherry, Oh Baby' on there. And, y'know, they were ahead of the curve on that! 'Memory Motel' I liked, y'know, Keith (Richards) has his little snippet singing in there. I like that whole album.”

Although the Stones are renown for their hard partying ways throughout the 1960's and '70s — with Black And Blue marking the end of Keith Richards' heroin period, Mick Jagger admitted that having that type of fun never amounted to memorable music once inside the studio: “Well, y'know, if you take lots drugs and you get drunk all the time, you don't really prod. . . People thought for a while that would produce tremendous sort of creative ability — I don't think it really does. I'm not saying you shouldn't go out and have a good time, but if you try to work when you're completely out of your mind, it make the work much longer. (Laughs) It just takes forever to do.”