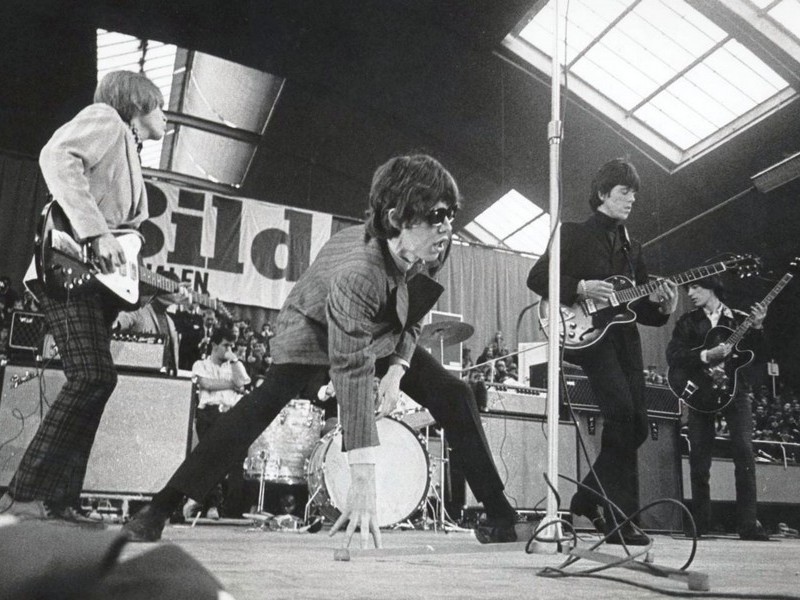 55 Years Ago: The Rolling Stones Begin Recording ‘(I Can’t Get No) Satisfaction’

It was 55 years ago Sunday (May 10th, 1965) that the Rolling Stones began recording their signature tune “(I Can't Get No) Satisfaction” at Chicago's legendary Chess Studios. Co-writer Keith Richards began writing the song in the early hours of the previous May 7th, while the group was on tour in Clearwater, Florida. In the middle of the night, Richards woke up with the distinctive eight-note riff in his head and recorded it on a portable tape recorder he traveled with. According to Richards, the actual tape contains 15 seconds of the song's riff and “40 minutes of him snoring.”

The next morning, Richards played the demo to Mick Jagger with the simple instructions that, “The line that goes with this riff is 'I can't get no satisfaction.'” Jagger immediately wrote a set of lyrics that were considered risque for 1965. He recalled to the BBC that, “The lyrics to this were truly threatening to an older audience. This song was perceived as an attack on the status quo.”

When the group began sessions for the song on May 10th at Chicago's Chess Studios — where their idols Chuck Berry, Bo Diddley and Howlin' Wolf had recorded their classic hits — Richards experimented with a new Gibson Fuzz Box for his guitar. He had originally intended for a horn section to supply the song's introduction, but it was the rest of the band — which then included the late Brian Jones on guitar, bassist Bill Wyman, and drummer Charlie Watts — that convinced him to keep the “fuzz guitar” on the track despite Richards' fear that it sounded “too gimmicky.”

Years later, Richards said that he originally thought the song would only be good for use as an album track, admitting to author Phillip Norman that, “I never thought it was commercial enough to be a single.”

“(I Can't Get No) Satisfaction” debuted on the Billboard Top 40 on June 19th, 1965, and on July 10th it hit Number One, topping the charts for four weeks. Over the years, the song has been covered by artists as diverse as Otis Redding, Devo, and Britney Spears.

Although the song would remain a live staple for the group until 1972, it was retired from live performances until 1981. The group opened the majority of their 1997-1998 Bridges To Babylon Tour with “(I Can't Get No) Satisfaction,” marking the first time the song was not performed as a concert's closing number or as an encore.

Well over 50 years after being pegged the bad boys of rock, Mick Jagger admits that the Rolling Stones were particularly mellow seeing as how crazy the rock world became by the end of the 1960's: “In those days, what the press portrayed as wild, was actually in our world now, quite tame, y'know? But, for those days people were very easily shocked. You've got to remember it was still a very shockable society there wasn't the kind of scandal mongering quite in this way as there is now, which is kind sort of scandal on a daily basis — there's a stable diet of it, I think. But they love scandal, of course, the newspapers, so they used to play it up a lot. So even though we didn't do that many shocking things in the early days (laughs) people were easily shocked.”

Although certain songs in their catalogue have been revamped over the years, Keith Richards explained that for the most part, he has no interest in changing the arrangements of the Stones' greatest songs: “A lot of these things are in their time, and they belong where they belong. And to fiddle about with them and treat them as, y'know, they're 'Mona Lisa's,' or something would be pointless. All the big ones and the best ones that everybody knows, we'll leave them as they are. Y'know, I won't recall nothing and say, 'We shoulda done this or shoulda done that.' Y'know, 'cause they're in their time and space. That's where they are.”

On July 10th, 2015 in commemoration of the 50th anniversary of their first chart-topper, the Stones released a limited edition, numbered 12-inch version of “(I Can’t Get No) Satisfaction” on 180-gram vinyl. The band’s groundbreaking track was featured on the A-side, with the B-side including both original U.S. and UK flip sides: “The Under Assistant West Coast Promotion Man” and “The Spider And The Fly,” respectively.

The record was housed in a sleeve featuring award-winning photographer David Bailey‘s shot of the group, recreating the original 7-inch single artwork. The tracks were mastered by Carl Rowatti at Trutone Mastering Labs and cut from the original mono master tapes.