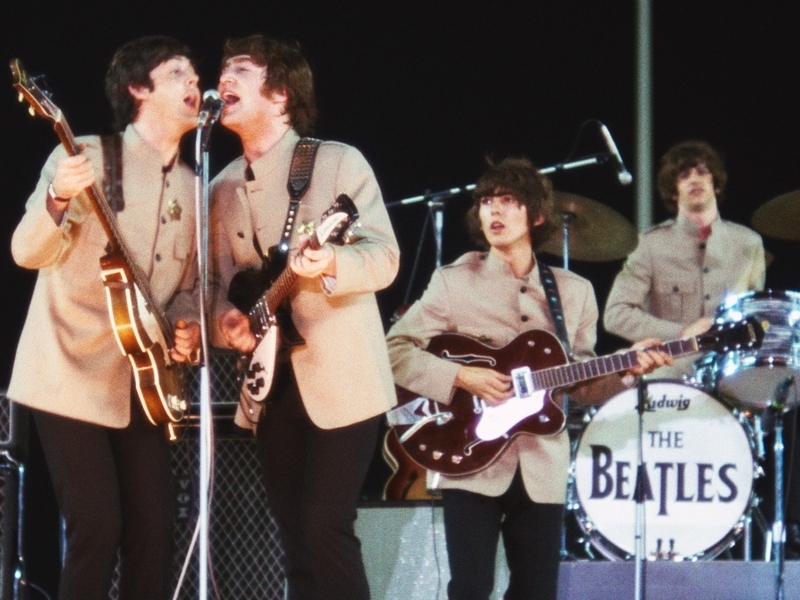 Flashback: ‘The Beatles At The Hollywood Bowl’ Released

It was 43 years ago today (May 4th, 1977) that The Beatles At The Hollywood Bowl was released. The live album, which featured songs from all three of the group's shows at the venue, August 23rd, 1964 and August 29th and 30th, 1965, was remixed and produced by George Martin for release. The collection, which to date is the Beatles' only official live album, and their first previously unreleased archival collection, went on to peak at Number Two on the Billboard 200 album charts.

The Hollywood Bowl set capped an amazing week for fans, who saw the Beatles' completely unofficial and unsanctioned first live album released only two days before. The low-fi gem, Live! At The Star-Club In Hamburg, Germany; 1962, literally chronicled the “Fab Four's” final shows as a club band during the final weeks of 1962.

The Beatles At The Hollywood Bowl featured the constant shriek of 17,000 fans and proved that the group, who had long been said to be a slipshod and barely-adequate live act, was actually a tight ensemble that was able to faithfully reproduce their classic hits and album favorites on stage.

As was the case with the 1970's Beatles compilations, John Lennon took an active interest in the project and went so far as to suggest the album's title. Interestingly, despite the involvement of Lennon, Martin, and the Beatles' longtime engineer Geoff Emerick, the word since the album's release is that the group was adamantly against the project being issued, which led to a 14-year moratorium on vault releases.

The Beatles first used the audio from their 1965 performance of “Twist And Shout” in their TV film The Beatles At Shea Stadium in place of the substandard original version. Most recently, the band used footage from the 1964 concert as part of The Beatles Anthology project — and included a 1965 Hollywood Bowl version of “Baby's In Black” for the band's 1996 “Real Love” reunion CD single.

Fans have been clamoring for the three unedited Hollywood Bowl tapes to be issued since the 1977 album was released.

Paul McCartney admits, that for him, the ascent to fame was actually the most fun time to be a Beatle: “The earliest days of the Beatles were very exciting. On the one hand, you're just in the little town you'd grown up in — with your friends and your relatives that you know. And you're doing work in that town, like we were — we were playing lunchtime sessions at the Cavern. And then suddenly for us it was like, you're starting to play theaters and ballrooms and they're abroad, and you're branching out a lot, you're doing a lot of traveling. I mean, those were very tiring days — crazy days, really, but there was a lot of fun in those days.”

Ringo Starr said that the non-stop pressure on the Beatles' during their touring years was doable because everything was so new and exciting for the group: “We loved it, and it was busy. We made a record, we played a live gig, we did a photo shoot — and then we had lunch. (Laughter) And then we started the afternoon. I mean, it was busy — but it was great, we were doin' something!”

The Beatles are in rare company as only three other acts have scored over 30 Top 10 albums — the record holders, the Rolling Stones with 36; Barbra Streisand with 34; and Frank Sinatra tied for third with the “Fab Four” — also with 32.

The tracklisting to The Beatles: Live At The Hollywood Bowl is: “Twist And Shout,” “She's A Woman,” “Dizzy Miss Lizzy,” “Ticket To Ride,” “Can't Buy Me Love,” “Things We Said Today,” “Roll Over Beethoven,” “Boys,” “A Hard Day's Night,” “Help!,” “All My Loving,” “She Loves You,” “Long Tall Sally” — along with the debut of “You Can't Do That,” “I Want To Hold Your Hand,” “Everybody's Trying To Be My Baby,” along with the previously released “Baby’s In Black.”