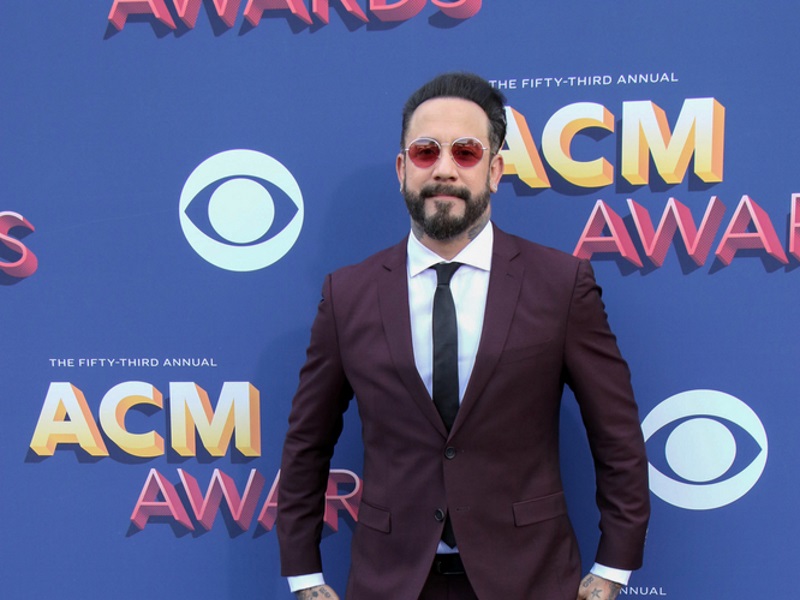 AJ MCLEAN SINGS RIHANNA: Backstreet Boy’s AJ McLean has released his cover of “Love on the Brain,” Rihanna’s Top 5 hit from her 2016 album, Anti. He tells Us Weekly that he recorded the song four years ago after his manager suggested that he cut his own version of a song by a female artist. AJ’s wife, Rochelle, was listening to Anti at the time and suggested he try “Love on the Brain.” “I listened to it and I couldn’t stop listening to it,” AJ recalls. After he decided to go in a country direction for his solo project, AJ shelved the cover, though he did play it for fans on the most recent Backstreet cruise and, he says, “They went nuts.” He’s releasing it now, he says, because people need something that makes them feel good.

MARIAH CAREY CELEBRATES ‘E=MC²’ TOPPING THE ITUNES CHART WITH ‘LAST KISS’ PERFORMANCE: Mariah Carey’s dedicated fanbase, Lambily, propelled her 2008 studio album, E=MC², to No. 1 on the iTunes Albums Chart on Monday, and now she’s celebrating their efforts. “Woke up yesterday to find out that E=MC2 is somehow the #1 album on iTunes!! On its 12th anniversary no less 😃 Lambily, you are the friggin’ BEST! I hope you enjoy this impromptu version of Last Kiss ft. Mutley ❤️❤️❤️ #JusticeForEMC2,” she captioned a video of herself singing a deep cut from the record.

SELENA GOMEZ REMAKES HER ‘BOYFRIEND’ VIDEO USING DOLLS: Selena Gomez directed a new video for her song, “Boyfriend,” which is a shot-for-shot remake of her original music video using dolls instead of real people. The detailed visual features a Barbie version of Selena as she goes on a series of dates with Ken doll suitors and uses a magic potion to turn them all into frogs. Eagle-eyed fans noticed the boy dolls seem to include members of BTS, specifically the Jin and Jungkook dolls from their 2019 Mattel collaboration. “Boyfriend” is featured on the deluxe version of Selena’s latest album, Rare.

HALSEY AND MARSHMELLO TEAMING UP FOR NEW SONG ‘BE KIND’: Halsey took to the social media Wednesday to announce she’s teaming up with EDM producer Marshmello for a new tune called “Be Kind.” The track will be dropping Friday at 12 a.m. ET. Earlier “Be Kind” follows the release of “The Other Girl,” Halsey’s duet with country star Kelsea Ballerini.

ED SHEERAN REFUSES TO FURLOUGH BAR STAFF DURING COVID-19 SHUTDOWN: Ed Sheeran has refused to furlough staff at his London pub, Bertie Blossoms after it was forced to close amid the coronavirus outbreak. A spokesman for the singer said Sheeran also turned down the chance to use a new scheme which sees the government paying 80% of an individual’s salary, and the company having the option of paying out the additional 20%. Sheeran, who is worth an estimated $211 million dollars USD, has drawn sharp comparisons to Victoria Beckham. Earlier this year, the former Spice Girl, who is worth $415 million USD, furloughed about 30 employees from her long-struggling fashion label. She also petitioned for the government bailout.

ZAYN AND GIGI HADID EXPECTING A BABY GIRL?: Zayn Malik and Gigi Hadid have yet to confirm the news that they are expecting their first child together, but that hasn’t stopped a supposed gender reveal speculation. Sources tell Entertainment Tonight and TMZ that the couple is having a girl. Gigi is reportedly 20 weeks pregnant, the news breaking just after the model celebrated her 25th birthday in quarantine with Zayn and her family. Fans were quick to note the blue and pink strings on Hadid’s birthday balloons, leading to speculation that the festivities may have doubled as a gender reveal party.

EMINEM DONATES $20,0000 AIR JORDAN SNEAKERS: Eminem has donated his $20,000 Air Jordan 4 x Carhartt Sneakers for COVID-19 relief. He announced the news on Instagram, saying, “Cleanin’ out my closet… donating extra pair of my @jumpman23 @carhartt 4’s along with a vintage T to @stockx. Proceeds go to the COVID-19 Solidarity Response Fund.”

IGGY AZALEA REPORTEDLY GIVES BIRTH TO FIRST CHILD: Gossip of the City has reported that Iggy Azalea and boyfriend Playboi Carti welcomed their first child over the weekend. No further details about the child has been revealed. Rumors started swirling back in December that the rapper was pregnant.