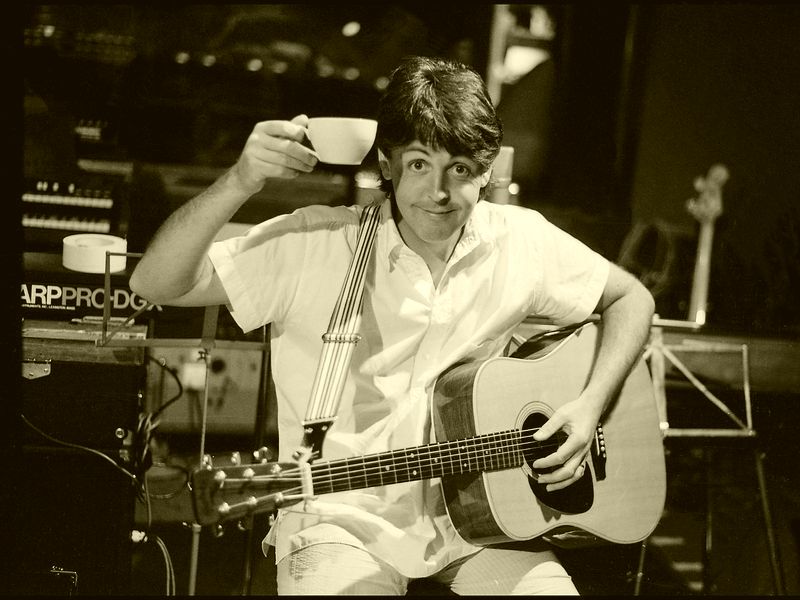 It was 38 years ago Sunday (April 26th, 1982) today that Paul McCartney released his critically acclaimed Tug Of War album — which marked his last chart-topping set until 2018's Egypt Station. The collection, which was the first to be released following John Lennon's December 1980 murder, marked the his first album released since Wings' 1981 split, and McCartney's reunion with legendary Beatles producer, the-late George Martin.

Tug Of War featured cameo appearances by such heavyweights as Ringo Starr on the album's second single — the Top 10 “Take It Away,” childhood hero Carl Perkins, and Stevie Wonder, who appeared on two songs — including the pair's seven week chart-topper “Ebony And Ivory.” The track marks the final time a song composed solely by McCartney hit the top spot. The album also featured McCartney's poignant tribute to Lennon, “Here Today,” which McCartney has performed on every tour since 2002.

George Martin had previously worked with McCartney during the '70s as an arranger on select tracks from his 1971 Ram album and his 1973 blockbuster “My Love” — but had only co-produced the former Beatle once for the 1973 Top Two Oscar-nominated theme to Live And Let Die. Shortly before his 2016 death, Martin remembered worrying if McCartney had been his own boss for so long that he would be above or beyond any musical direction: “He had been used to working by himself for seven or eight years and wasn't used to having a producer telling him: 'That's no good, or you should do this again.' And I wondered how he would react to it. And he said, 'Oh, we know each other so well, I don't think it'll be a problem. (Laughs) The first thing that happened was, I said, 'First of all, I think we ought to look at your material and see what the songs are like.' And he said, 'Well, do you mean I've got to pass an audition?' (Laughs) So, I could see that that was. . . might've been a problem, but in fact, it worked out fine. We got into a method of working where we weren't rubbing each other up the wrong way too much. There's gotta be a certain amount of abrasion.”

Although Wings was still in operation during the beginning of the Tug Of War sessions in the fall of 1980, Wings lead guitarist Laurence Juber — who was working other sessions for George Martin — told us that he was ready to try things out on his own: “I was part of a particular era. That era had, y'know, time had moved on. There certainly. . . there was no reason for me to hang around and kind of ingratiate myself into the sessions, 'cause I wanted to move on. Y'know, I got my masters from 'McCartney University.' I had an impulse to get on with my life.”

Paul McCartney talked to the BBC’s Dermott O’Leary and shed light on his state of mind going it alone as a solo artist: “I was a little bit nervous, ‘cause you’re, sort of, now starting a new period; but it’s exciting ‘cause you’ve written some new songs, you wanna get in the studio. And I was getting in with George Martin, so that was really exciting, starting to work with George again. So, I knew I loved working with him, he’s just a fantastic person. I mean, in truth, I always think it’s an exciting time to make music, no matter what’s going on, ‘cause the focus to me is the making of the music. But that time it was good, because — as we said before — it was a new phase for me. It was something I was going to be working on my own as a solo artist. And what was that going to bring me? Was that going to work, or was it not? Y’know?”

Returning to the fold for Tug Of War and Pipes Of Peace was legendary Beatles engineer Geoff Emerick. Emerick had been behind the boards for several Wings projects, including the Band On The Run and London Town albums, as well as the long-unreleased One Hand Clapping film project. He maintains that it was actually McCartney's decision not to use Wings on the Tug Of War sessions: “No. No, I don’t think George said ‘I don’t wanna produce a Wings album’ at all. I mean, I wasn’t privy to any conversations between Linda and Paul as to whether you should be doing your own album, or it should be a Wings album. Yeah, I think we started it off as just being Paul’s album.”

Although McCartney's longtime second banana Denny Laine contributed musically to the Tug Of War sessions, a loose tongue with a reporter ultimately cost him his decade-long job of a lifetime. When it came time for vocal overdubs, he was replaced by 10cc's Eric Stewart — McCartney's right-hand man for the next four years.

We asked McCartney about the state of their relationship after parting ways in 1981: “Denny Laine, no, I'm not — we're not big friends. Y'know, we had a bit of a fall out. And he sold his story to the newspapers — which is never gonna make a great friend with those kind of people, y'know? He says he was drunk when he did it and stuff — and he probably was. But, he's okay. He's okay, but we don't see much of each other, y'know?”

Bassist Stanley Clarke, a legend in the jazz world, was a long-time favorite of McCartney, and was part of the album's sessions on the West Indian island of Montserrat, where George Martin's Air Studios was situated. He told us that in the weeks following Lennon's murder that McCartney was unable to escape the madness which followed his former partner's killing: “Y'know, we went to some island somewhere, I think it was. . . the Tug Of War record, that was right after or during the John Lennon (murder) — 'cause I remember those interviews, when they interviewed Paul McCartney, I think we were recording at that time. Yeah, 'cause I remember we were on this island and then the secret service came in and they wanted us to wear some (bullet-proof) vest, 'cause some people were saying — y'know, there was pranks, they were saying 'We're gonna bomb the island,' this is 'Kill a Beatle week,' and all that kind of mess, y'know? And he was cool. It's like, there's a price when you're really famous, y'know? Like that kind of fame.”

The 'Take It Away” video made McCartney a huge player on early MTV — and marked the first of several videos which would feature Ringo Starr over the years: “'Take It Away,' it's lovely to see him. And he very kindly agreed to be the drummer. It was just fabulous, y'know, George Martin even appears.”