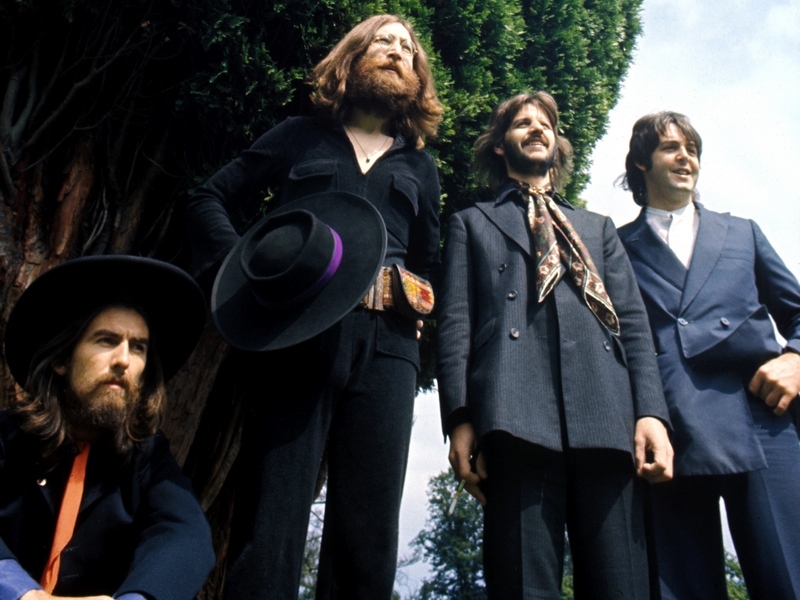 It was 50 years ago today (April 10th, 1970) that Paul McCartney's departure from the Beatles was made public, in effect announcing to the world what many fans had suspected over the past six months — the Beatles had broken up. McCartney's statements regarding the end of his songwriting partnership with John Lennon, along with his wish to record apart from Lennon, George Harrison and Ringo Starr, came as part of a question-and-answer sheet included with press copies of his debut solo album, which was simply titled McCartney.

The news had first leaked out three days prior to that. McCartney's brother in-law and attorney John Eastman let McCartney's break with the band slip while announcing plans for McCartney's plans for an animated film of the British animated character Rupert the Bear and the upcoming release of McCartney's debut album.

In the Q&A for the press, which was actually written entirely by McCartney, he asked himself several pointed questions about the future of the group. McCartney explained his reasons for going solo, citing “business and musical differences, but most of all because I have a better time with my family.” McCartney went on to issue what most fans read as the ultimate death knell to the Beatles: “I do not foresee a time when the Lennon & McCartney partnership will be active again in songwriting.”

In truth, the group had been dormant since Lennon privately announced his split to McCartney and Starr during a business meeting the previous September. By all accounts, George Harrison was not present for the announcement. Lennon ended the meeting by revealing to the pair that he wanted “a divorce” from the group. Tensions had been building between the Beatles since their return from India in the spring of 1968. And a year later, when Lennon, Harrison and Starr out-voted McCartney into hiring manager Allen Klein to run their company Apple Corps, the rift began to deepen.

True to his decision, Lennon didn't attend what turned out to be the group's final recording session on January 3rd, 1970, when the Beatles taped Harrison's song “I Me Mine.”

In the months that followed Lennon's private announcement, the Beatles gave interviews in which they all deliberately refrained from announcing the split. That February, nearly five months after quitting the group, Lennon told Rolling Stone that, “We still might make Beatles product. We just need more room. The Beatles are just too limited.”

That next month, both Starr and Harrison spoke to Britain's New Musical Express, with Starr stating that, “I've got things to do, George has things to do, and Paul has his solo album to come, and John has his peace thing. We can't do everything at once. Time will tell.” Harrison added that, “Say we've got unity through diversity. . . We had to find ourselves individually, one day.”

George Harrison told us in 1995 that the Beatles' split in 1970 was a completely liberating experience for him as an artist: “The situation at that time, the Beatles had, y'know, gone past the 'sell by' date or whatever you call it. Y'know, it's kinda like the Beatles had sort of finished, y'know? Everybody was. . . We were all tired of that, and so it was kind of exciting, the fact that I had all these songs — been collecting for over a period of time, and I was gonna be able to get an album out and release all this stuff so I can get on with my life, basically. Most of these songs were written over a couple of years prior to, actually, '70.”

Shortly after the split, John Lennon explained that apart from the music, the Beatles shared an intense and deep relationship with one another: “It takes a lot to live with for four people over and over for years and years, which is what we did. And we called each other every name under the sun, we got to blows, we've been through the whole damn show. We know where we're at — we still do. We've been through the mill together for more than 10 years, y'know? We've been through our therapy together many times, y'know?”

Ringo Starr shed light on the slow build-up to the Beatles break-up: “Y'know, I think it shows as an absolute fact that we were going different places, y'know? The energy for the Beatles was waning. We put in a thousand percent, and then it was dwindling now, to 'Oh dear, do we have to turn up? We have to do that thing again? I wanna do this, and John wants to do that, and George was off. . .' Y'know people were — We had families.”

Paul McCartney says that both fans and the press have incorrectly pegged him as the villain in the “Fab Four” breakup: “Wrong, wrong, sorry. It wasn't me. It was John. What actually happened was: The group was getting very tense; it was looking like we were breaking up. One day we had a meeting, I came in and it was all Apple and business and Allen Klein and it was getting very hairy and no one was really enjoying themselves. It was. . . we'd forgotten the music bit — it was just business. I came in one day, and I said, 'I think we should get back on the road — small band, go and do the clubs, sod it, let's get back to square one, let's remember what we're all about. Let's get back.' And John's actual words were, 'I think you're daft. And I wasn't gonna tell ya, I'm breaking the group up.' He said, 'It feels good — it feels like a divorce.' And he just sat there and our jaws just dropped.”

Ringo Starr believes that no band can expect to carry on indefinitely as a thriving artistic unit: “The lifespan of any band, really, is, like eight years, because by then, y’know, you were 20 when you started. Early-‘20s, you’re energized and suddenly you’re 30 and, ‘Y’know, I wanna play the blues!'”

In December 1970, Lennon spoke about McCartney's announcement, telling Rolling Stone that “We were all hurt that he didn't tell us what he was going to do. . . A lot of people knew I left. I was a fool not to do what Paul did, which was use it to sell a record. I wasn't angry. He's a good PR man, I mean he's about the best in the world . . . he really knows how to do a job.”

McCartney says that the split from the group sent him into a huge depression for several months: “I was quite broken up by the end of the Beatles. I'd been trying to hold them together, but it was something that wasn't to be. So, y'know, I went into a bit of a depression after that. And I'm normally quite optimistic, but, y'know, I'd just lost the best job in the world, and anyone who's just even ever lost a job knows how that feels.”

During his last TV interview in April 1975, John Lennon told Tomorrow Show host Tom Snyder that the Beatles broke up simply because they had grown stale: “We didn’t breakup because we weren’t friends, we just broke up out of sheer boredom, y’know? And boredom creates tension. It was not going anywhere. We’d stopped touring, and we just said ‘time to make an album.‘ Y’know, the same four of us, we’d be looking at each other and playing the same licks. We were very good friends and we’d known each other since we were 15, y’know? And we got over all the actual fighting.”

Although the split cemented the fact that the Beatles would no longer record as a single unified group, in December 1970 McCartney sued Lennon, Harrison and Starr to formally dissolve their business partnership. His suit ultimately put all the monies earned by the group in escrow for the next five years. The Beatles formal partnership stretched on until early 1975.

Their business problems carried on through the next 20 years before all their interpersonal lawsuits were settled. Today, the group's company, Apple Corps, is jointly owned by McCartney, Starr and the estates of Lennon and Harrison, and handles all past and future Beatles business.

In 1999 McCartney recalled the split for his Wingspan project, saying that, “It doesn't matter who broke the Beatles up — the Beatles were ready to break up. We'd come full circle and now we had to get on with something new, all of us.”

In the years following the group's split, McCartney went on to become the most commercially successful of the four ex-Beatles. Since 1970, McCartney has scored 22 Top Ten hits, including nine Number Ones, seven Number One albums, nine Grammy Awards, and two Oscar nominations.

McCartney returned to the stage in 1972 with Wings. Although his initial solo tours excluded any Beatles material from the concert setlists, by Wings' final tours he was including a handful of Beatles songs in his shows.

Since his return to the road in 1989 after a decade of only a handful of performances, McCartney's live shows have been dominated by Beatles material, most of which the band had never performed live.

Beginning in 2010, to the delight of many fans, McCartney began delving deeper into his classic Wings catalogue.