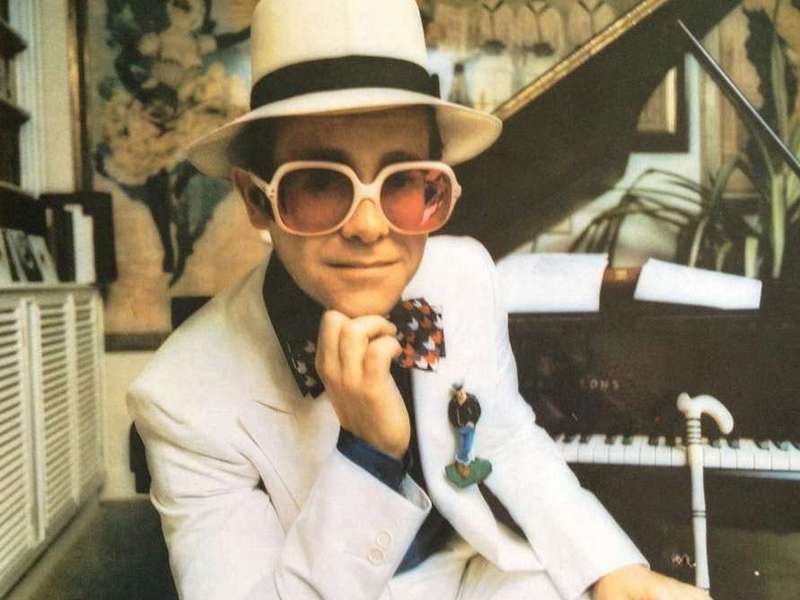 Happy Birthday to Elton John, who turns 73 today (March 25th)!!! Elton, who is back home in Britain after putting his “Farewell Yellow Brick Road” tour on ice due to the Coronavirus, chatted with Apple Music and spoke about the current situation, saying, “This is the time where people are going to spend more time with their families than they've ever done before. And so far, again, check with me in two weeks. I'm enjoying it so much because I don't spend that much time with my family during the day and I'm loving every second of it. So cherish it while you can. Every cloud has a silver lining.”

He went on to say, “To be honest with you, it's great to be able to spend this much time with my boys because normally I don't, even though they've been on the road with us since November in Australia and New Zealand. This is 24/7 with them and it's fantastic. I mean I'm saying that after a week, check on me in about three weeks.”

2020 has already seen it's up's and down's for Elton, with a handful of shows being postponed after he contacted pneumonia. In February, Elton and longtime collaborator Bernie Taupin won their first joint Oscar for “(I'm Gonna) Love Me Again” — the theme to last year's Rocketman biopic, which is sung with Elton's silver screen counterpart, Taron Egerton.

Last October, Elton published his autobiography, titled Me. The book, which was co-written by with music journalist Alexis Petridis, was a New York Times Bestseller.

Elton John says he's winding down his performing career because his family needs to come first in his life. Elton and David Furnish have been together since 1993, entered into a civil partnership in 2005, and married in 2014. They are the parents of two sons, nine-year-old Zachary and six-and-a-half-year-old Elijah.

Elton explained why it was important for him to finally quit the road: “And, y'know, I always thought I was going to be like Ray Charles, B.B. King — on the road forever. But once your life changes and you have the children; it has changed our life so much, and I love them so much — and they'll be coming on part of this tour with us. We're going to take them out of school for nine months, with a tutor. I just wanna be there. When I stop, they're going to be 10 and eight and that's a very important time in their lives. I love them so much, I don't want to miss them and I don't want them to miss me.”

Elton released his most recent album, Wonderful Crazy Night, on February 5th, 2016. The set was co-produced by Elton and T-Bone Burnett and recorded at The Village in Los Angeles. The album, which features 12 new collaborations with lyricist Bernie Taupin, also includes Elton's legendary bandmates — drummer Nigel Olson and guitarist Davey Johnstone, who although onstage with Elton every night, had not been featured on the “Rocket Man’s” studio sessions since 2006’s The Captain & The Kid. Also on board from the legendary '70s Elton John Band lineup is beloved percussionist, Ray Cooper.

Elton John was born Reginald Kenneth Dwight in Pinner, Middlesex, a suburb of London. John was playing piano at age three, and by the age of 11 he was studying at London's Royal Academy of Music. He later dropped out to work as a music publishing errand boy and play rock n' roll at night. John recorded and gigged with his early band Bluesology, and went on to back such legendary acts as Patti LaBelle and the Bluebelles and the Isley Brothers.

In 1967 he hooked up with aspiring lyricist Bernie Taupin and went on to form one of the most successful songwriting partnerships in rock history. By early 1971, Elton had cracked the American charts with “Your Song,” which peaked at Number Eight, and became the first of his 25 Top 40 hits of the 1970's. In the '70s, John and Taupin turned out hit after hit, placing 25 singles in the top 40, 16 in the Top Ten, and sending six to Number One.

Of the 19 albums Elton released in the States during the 1970's, 15 went gold or platinum. His 1975 album Captain Fantastic And The Brown Dirt Cowboy holds the distinction of being the first album to debut at Number One in the charts. A month after its release, on June 21st, 1975, Elton performed the album in its entirety at London's Wembley Stadium. Elton took the stage at the close of a mammoth outdoor rock concert, which featured the Beach Boys and the Eagles as the opening acts.

Elton John's classic singles include “Rocket Man,” “Honky Cat,” “Crocodile Rock,” “Bennie And The Jets,” “Goodbye Yellow Brick Road,” “The Bitch Is Back,” “Don't Let The Sun Go Down On Me,” “Daniel,” “Philadelphia Freedom,” “Island Girl,” the duet “Don't Go Breaking My Heart” with Kiki Dee, “Lucy In The Sky With Diamonds” with John Lennon, “Someone Saved My Life Tonight,” “Little Jeannie,” “I'm Still Standing,” “I Guess That's Why They Call It The Blues,” “Sad Songs (Say So Much),” “Candle In The Wind,” “Can You Feel The Love Tonight,” and many, many more.

Elton John told us that his songwriting partnership with Bernie Taupin has given him great strength and proved to be one of the strongest relationships in his life: “It's been a remarkable partnership in the fact that we've never broken up — although it was rumored that we did break up — we didn't, we just had a break from each other and wrote with other people. Y'know, you can't suffocate each other. And the fact that we're still writing, and loving writing with each other — we root for each other. And too often in this business, people get jealous, y'know, people break up a great thing over the most stupid thing. And he's been my brother without the music, he's been my brother with the music. He became the 'Brown Dirt Cowboy,' I became 'Captain Fantastic'– we lived out. . . y'know, that album was very prophetic, that's what we became”

Elton says that he thrived on the demands in the '70s to constantly write new material: “I was under contract to do two albums a year, and we did it, and we did separate singles, we did separate B-sides and it was fun. If you love writing songs, there's no reason why you cannot do that.”

The Elton John AIDS Foundation (EJAF) is one of the world’s largest HIV grant-makers. With offices in New York and London, EJAF has raised more than $349 million for the treatment and prevention of HIV/AIDS since its inception in 1992.

In the Americas, the EJAF invests approximately $7 million in more than 120 organizations every year, with half of this focused on the Southern U.S. and the Caribbean.

Elton's efforts do not stop at fundraising. In April 2002, the singer visited Capital Hill, where he told Congress the U.S. has the power to end the AIDS epidemic: “Mr. Chairman and members of the committee, the United States government is the biggest possible source of new funding for fighting AIDS. 40 million people are infected with HIV. Eight thousand people are dying every day. You have the power to end this epidemic. Please end it . . . please end it.”

Bernie Taupin told us that although his and Elton's songs have become pop standards over the years, that shouldn't take away from the quality of the work: “First and foremost, we are good songwriters. And there's nothing wrong with writing a great song — providing it retains elements of passion, and whatever. As long as its not just a surface thing. And I think these songs are very commercial and there's nothing wrong with being commercial, yet they are at the same time very passionate.”

Elton says that from a very early age, his only objective was to work in some facet of the music business: “I honestly feel I couldn't have asked for a better life. I mean, I wanted to be involved in music — whether it was working in a record store, whether it was working in a publisher's (office), whether it was writing. . . I didn't ever envisage being a singer, that happened by accident, but I just love what I do. As I've grown older, I love to play live much more. I feel much more comfortable with my own self, so being onstage is much more comfortable to me. I don't have to hide behind big glasses and costumes anymore.”

With over 50 years under his belt as a world-class singer-songwriter-performer, we asked Elton John what continues to inspire him: “It's always about tomorrow and not the past. It's lovely to go and to look back, but I'm a person who looks forward. I'm more interested in what's going to happen next. I value the past and my career, and sometimes when I go back. I think, 'Oh, that's pretty good'– but I'm all about what's going to happen next.”