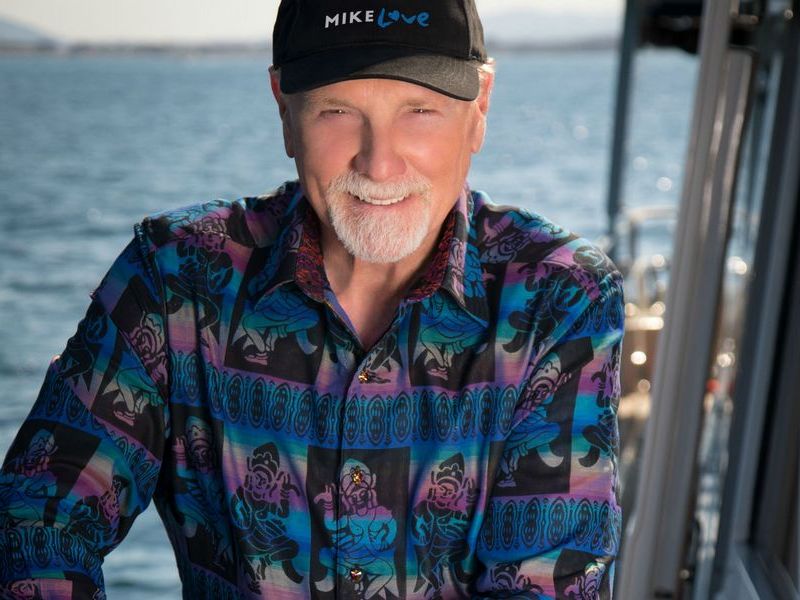 Happy Birthday to the Beach Boys' Mike Love, who turns 79 on Sunday (March 15th)!!! Love, who formed the group in 1961 with his first cousins Brian, Dennis, and Carl Wilson, and with friends David Marks and Al Jardine, went on to co-write most of the group's major hits with Brian Wilson. Love holds the license to tour under the band's name, enlisting none of the other three living co-founders, choosing instead to use a side band — along with longtime member Bruce Johnston, for his live dates.

Last month, Mike Love garnered a heap of negative press after Brian Wilson and Al Jardine urged fans to sign a Change.org petition against his Beach Boys touring revue playing at a trophy hunting private event. Love headlined February 5th's Safari Club International Convention in Reno, Nevada, at which Donald Trump Jr. was the keynote speaker. The Change.org petition called on a boycott of the Beach Boys until they cancelled their performance, as well as undertaking public protest at the group's shows.

Love issued a statement to Variety, saying: “We look forward to a night of great music in Reno and, as always, support freedom of thought and expression as a fundamental tenet of our rights as Americans. Peace & Love, Mike Love.”

Last July, Love has just released his third solo album in as many years, titled 12 Sides Of Summer. The set is a concept album — featuring songs focused all on the summer season. Highlights include covers of the Ramones' “Rockaway Beach,” the Beatles' “Here Comes The Sun,” Stan Getz & João Gilberto's “The Girl From Ipanema,” the Rivieras' “California Sun,” Eddie Cochran's “Summertime Blues” — along with such Beach Boys remakes as “Keepin' The Summer Alive,” “Surfin' Safari,” “Surfin',” and “It's O.K.” featuring Hanson.

“California Beach,” is a revamped version of the Beach Boys' 1979 outtake of the same name, recorded after the band had competed the classic L.A. Light Album.

In 2016, Mike Love's memoir, Good Vibrations: My Life As A Beach Boy, was published which told his side of the Beach Boys' long and storied saga.

Mike Love has always been a divisive figure in the Beach Boys' world due to his frequent lawsuits against bandmates and family members. He faced the brunt of ill will from fans and the group following the Beach Boys' 50th anniversary reunion, which resulted in a sold out international tour and first original Top Three album in 47 years. Instead, after 75 shows, Love, who controls the license to tour under the group's moniker, opted out of carrying on with the group's actual members — Brian Wilson, Jardine, and Marks — preferring instead to tour in primarily secondary and third-tier markets with interchangeable hired hands.

Love, who has often stated that his upbeat lyrics served as a direct contrast to Wilson's intricate harmonies and chord structures, wrote the majority of the lyrics to Beach Boys' classics such as “Fun, Fun, Fun,” “I Get Around,” “California Girls,” “Good Vibrations,” “Darlin',” “Do It Again,” “Help Me, Rhonda” — along with their 1988 Number One comeback hit “Kokomo.”

Mike Love told us that when looking back on the group's golden era — one song stands out as the stars perfectly aligning in terms of creativity and commerce: “Well, I think 'Good Vibrations' was probably the height of our creativity in the '60s. It was not only successful — really successful — but it was very unique. (It was) probably the least derivative of our hit singles. Meaning, y'know, everything is based on something that came before — that's what I mean by derivative. But with 'Good Vibrations,' it was so darn different, so unique sounding. And yet it was successful as well. And I admit to liking things that are both successful and creative (laughs).”

According to many sources, Love openly disdained Wilson's more progressive mid-'60 work, including 1966's Pet Sounds and its long unreleased 1967 follow-up, Smile. Love was reportedly unhappy with Wilson's constant search for new sounds and breaking away from their light and positive teen-based formula.

Noted Beach Boys author Jon Stebbins remains one of the few working journalists able to cover the band's legacy without the need to denigrate Mike Love's sometimes more commercial leanings in an effort to boost Brian Wilson's already acclaimed accomplishments: “What I get tired of is people saying, 'Well, Mike wouldn't have been anything if it hadn't have been for Brian. The only reason that we talk about this still is because of Brian. Because he gave it something that's so unique, and so deep, and works on such a spiritual level that it's timeless and we still talk about it.' However; we might never have had that to enjoy if it hadn't been for a Mike Love.”

Over the years, Love has devoted much of his time — as well as his money — to various ecological and spiritual causes, most notably the teachings of Transcendental Meditation, which he studied along with the Beatles in 1968, under the tutelage of the Maharishi Mahesh Yogi in India.

He says that even now the Maharishi's teachings still hold great significance for him: “You know that I'm a practitioner of Transcendental Meditation — TM. When the Maharishi first came out teaching TM he said, 'For the forest to be green, every tree must be green.' Real simple things. And if there's going to be world peace, that means the individuals need to feel peaceful from within.”

As the '70s progressed, with his cousins each dealing with their various personal and substance abuse issues, Love and Jardine steered the group back into safer waters, focusing on a live act heavily reliant on the band's '60s “sun-n-fun” hits. In the early '90s, Love won a $5 million lawsuit against Brian Wilson, claiming that his name was left off most of the songs he co-wrote with Wilson in the 1960's.

Bandmate Bruce Johnston says that fans who have pegged Love as a villain over the years don't understand what a positive influence he really was for the band: “They're always angry at Mike Love, y'know (and think) all the Wilsons are gods and they're angry at Mike Love. Mike wrote some amazing lyrics that probably paved the way on many levels — including having enough money to finance Pet Sounds and all kinds of other projects.”