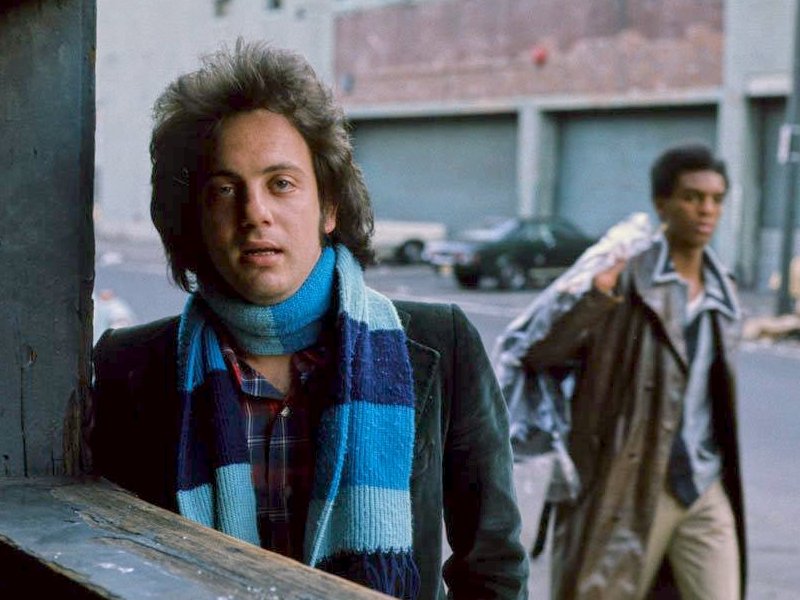 It was 40 years ago today (March 12th, 1980) that Glass Houses, Billy Joel's seventh album, and second straight chart-topper was released. The album — which was Billy's third to be produced by the late-Phil Ramone — was a more rock and new wave-inspired set than 1978's Grammy Award-winning 52nd Street collection, and went on to sell over seven million copies in the U.S. alone.

Glass Houses was propelled by the massive hits pulled from the set — including Billy's first chart-topper “It's Still Rock And Roll To Me”; the album opener and lead single “You May Be Right,” which hit Number Seven; “Don't Ask Me Why” which peaked at Number 19 — but was a two-week chart-topper on Billboard's Adult Contemporary chart; and the album's final single — “Sometimes A Fantasy,” which barely squeaked into the Top 40, stalling at Number 39. In the UK “All For Leyna” was released as as single and also underperformed, stalling at Number 39.

The album marked the last to featured the classic version of the Billy Joel Band including drummer Liberty DeVitto, the late-bassist Doug Stegmeyer, guitarists Russell Javors and David Brown, with saxophonist and keyboardist Richie Cannata — who after the Glass Houses tour was replaced by Mark Rivera.

Glass Houses hit Number One on June 14th, 1980, ending Bob Seger & The Silver Bullet Band's own six-week run with Against The Wind. Billy was knocked out of the top spot by the Rolling Stones' then-new album, Emotional Rescue — which bested both Billy and Seger by holding down the Number One position for seven straight weeks. All told, Glass Houses stayed in the Top 10 of the Billboard 200 for 25 weeks.

The following year, Glass Houses snagged the Grammy Award for Best Rock Vocal Performance – Male. He had been nominated for the coveted Album Of The Year prize, but lost out to Christopher Cross' self-titled debut. In 1981, Glass Houses won the American Music Award for Favorite Pop/Rock Album.

In 1979 when Billy Joel was composing the songs for the following year's Glass Houses collection, he made a concerted effort to write and record more “arena friendly” material: “We had now had about two, three years of playing in arenas and coliseums. And I recognized that need to write bigger music. Songs like 'Just The Way You Are,' 'Honesty' — ballads — they don't always fly that well in an arena. You need big sound. So I started writing harder-edged songs; more guitar-based songs — 'Sometimes A Fantasy,' 'It's Still Rock And Roll To Me,' 'You May Be Right,' 'Close To The Borderline,' 'All For Leyna.' The band loved playing it, audiences loved the material that was on the recording, and we were on a roll.”

Although Billy Joel's primary instrument has always been the baby grand piano, he revealed that when recording 1980's Glass Houses, he felt the need to stretch out with different keyboard, as his act started to fill the arena and “enormo-domes” across the world: “Instead of just playing an acoustic piano, I was playing all kinds of electric pianos, to try and get a harder edge. Around 1980, there was the Yamaha CP-80, and it just had (punches hand) a good punch to it. A really good (punches hand) bang, y'know on a piano. And you could throw it really good, too. I threw it off the stage a few times. It made an impression.”

Liberty DeVitto, who drummed on every Billy Joel studio album from 1976's Turnstiles to 1993's River Of Dreams, told us that Billy Joel was not the type of artist to slave over music for too long — he hit the sessions with the album already written: “Billy goes in the studio — nine songs. That's all he wrote. Maybe there's one that didn't make it — an idea that didn't make it.”

DeVitto revealed the only constant when recording with Billy Joel was that he never stayed in the same creative space for too long: “Billy changes things — every album, he changed something. Whether it be the style of music that he's writing, or whatever it is. You go from The Stranger to 52nd Street — more jazzy, to Glass Houses, which was just total rock, just the band, 'tip of the hat to the Beatles — (The) Nylon Curtain, Innocent Man — oldies.”

Shortly before his 2013 death, Phil Ramone touched upon his incredible — almost familial — connection with Billy Joel: “I never let him off the hook if there was something that could be better. Y'know, he trusted the hell outta me — by expressing myself. The band had it's own craziness and the way they spoke, but we, we really spoke. We spent time after the gig. And then I wouldn't hear from him for months. (I'd) suddenly get a call, just: 'Billy.' I said, 'Yeah, I've heard of you, whaddya want?' (laughs). Y'know, you get a relationship going.”