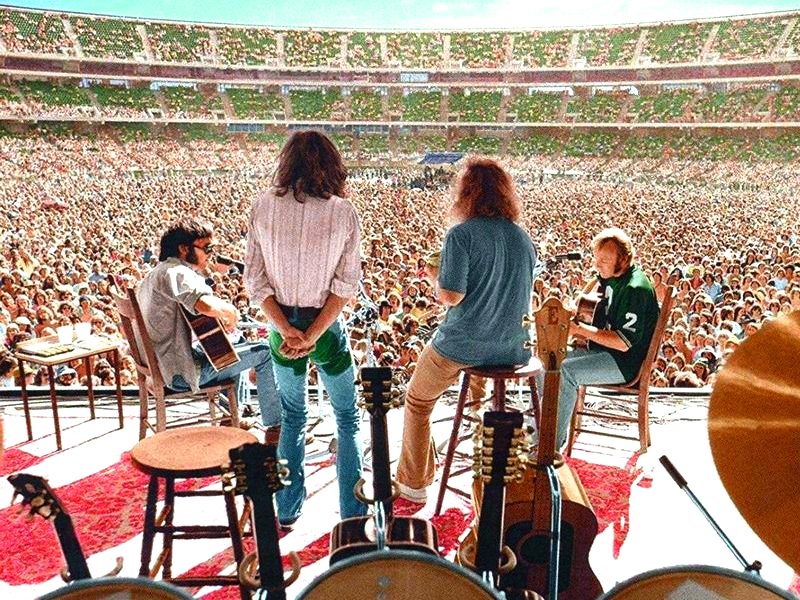 It was 50 years ago today (March 11th, 1970) that Crosby, Stills, Nash, & Young's Deja vu album was released. The album, which served as the followup up to the previous year's, watershed Crosby, Stills, & Nash collection, was the first to feature Stephen Stills' Buffalo Springfield buddy and foil, Neil Young. Young had begun performing with CSN shortly after the debut album was released.

Deja vu, which hit Number One for just one week on May 16th, 1970, stayed in the Billboard Top 10 for a whopping 23 straight weeks. Highlights on the set included Graham Nash's instant standards “Our House” and “Teach Your Children” — featuring Jerry Garcia making his debut on pedal steel guitar, David Crosby's title track and “Almost Cut My Hair,” Stephen Stills' “Carry On” and the solo “4+20,” Neil Young's “Helpless” — as well as the group's reinvention and definitive take of Joni Mitchell's “Woodstock.”

Graham Nash told us that Deja vu was a darker record than Crosby, Stills, & Nash due to the death of Crosby's girlfriend Christine Hinton in a car accident, and Nash and Stills' respective breakups with legendary singers Joni Mitchell and Judy Collins: “Because I wasn't with Joni, Christine had been killed, and Stephen wasn't with Judy — the songs are sadder. Y'know, we talk about relationships breaking up, y'know? It's just the way it is.”

David Crosby told us that although fame, cash, and adulation were absolutely a gas — they were never a motivation for him: “I didn't come for the money. I came to be excited. I came to have a blast. Y'know, to me, music is the most fun you can have with your clothes on. It's, it's a joy. That's really what I came for. And when it stopped being a joy, I didn't care how much money it would've been. It wasn't a joy.”

In truth, CSNY was almost built to self-destruct. Neil Young believes that from the onset, the magnitude of fame that CSNY achieved right out of the gate destined the foursome to never survive as a permanent entity: “We had no idea what we were doing. It’s not because there’s anything wrong with anybody in the band, it’s just with what we were confronted with. It changed us. The crowd. The adulation — the roaring sound. It changed us.”

Deja vu spawned three hit singles — “Our House,” which hit Number 30; “Teach Your Children,” which peaked at Number 13; and “Woodstock” which topped out at Number 11.

To date, Deja vu has sold over seven million copies in the U.S. alone.