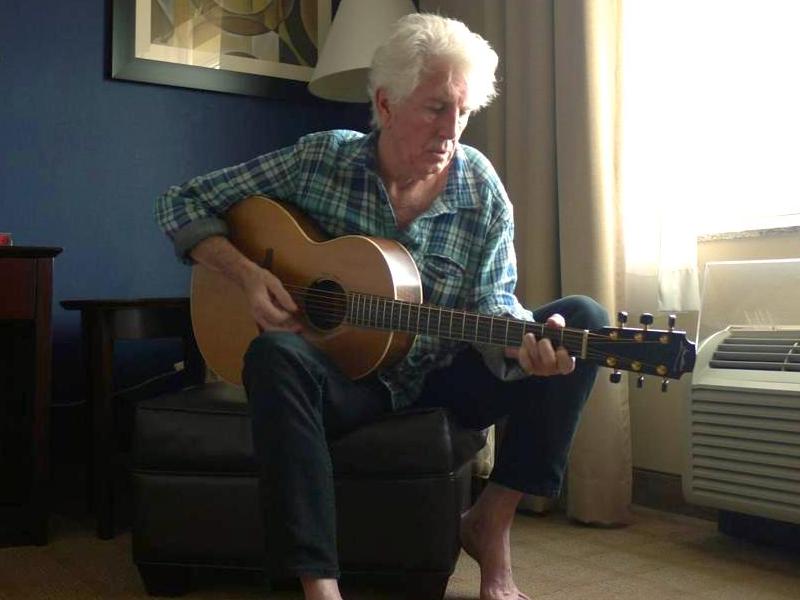 Graham Nash will be writing his next album while on the road. Nash kicks off a 20-city spring run tomorrow night (March 4th) at York, Pennsylvania's Strand-Capitol Performing Arts Center. During a chat with Lancasteronline.com, he revealed, “I’m got new songs. I’m about to go on the road, as you know, and normally, after a show when you’re still high from the audience reaction, that’s when we start to write. So, on this next tour, I’ll be putting the new album together.”

He went on to say, “All I do is wake up every morning and I write about what happens to me. It’s been a long life, so a lot of things have happened to me. People that go to shows but don’t write music are fascinated with where songs come from. 'What were you thinking when you wrote 'Our House?' 'Why did you write 'Immigration Man?' — and I tell them. That’s why these shows are sort of being billed as 'a show of songs and stories.'”

Although Nash covers a lot of ground during his shows, he understands that people are coming to see him to hear some very specific songs: “I do understand that there are certain songs that entice people to come and spend money to see us. I definitely know the songs that they want to hear. Quite frankly, my show will be stretching from my time with the Hollies all the way through today, with new songs and very old songs that people haven’t heard before. I have a huge number of songs to be able to sing.”

When we last caught up with Graham Nash, he told us that he believes that voter apathy is what led to Donald Trump winning the presidency in 2016. Nash told us that the voters that stayed home from the polls on Election Day essentially enabled the current events and scandals seeping out of the White House: “48 percent of the people eligible to vote in this country didn't vote. Now, some of them were probably (thinking) 'Maybe Hillary (Clinton's) going to run away with it, so why bother?' Some of 'em were lazy. Some of 'em don't give a (beep) — but 48 percent. Remember a couple of years ago when there was voting in the Middle East and the people used to put their finger in the little purple dye to register that they voted? That was a death sentence for many people! They got shot because they voted. And now 48 percent of our people didn't vote? And look what we got.”