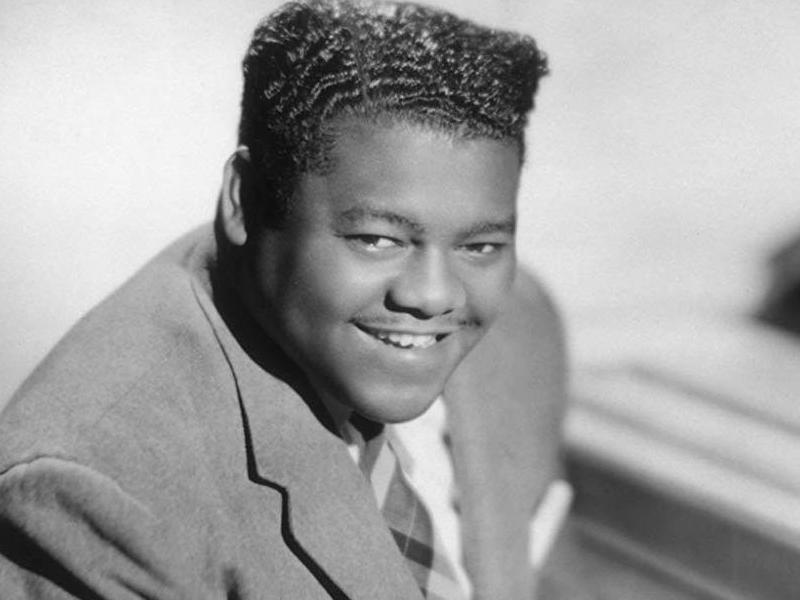 Today (February 26th) marks what would have been rock n' roll pioneer Fats Domino's 92nd birthday. Domino died on October 25th, 2017 at age 89 at his home in Harvey, Louisiana across the Mississippi River from New Orleans. Domino, whose real name was Antoine Domino, Jr. — and affectionately referred to as “The Fat Man” — is best remembered for hits spanning the 1940's through the 1960's such as “Ain't That A Shame,” “Blueberry Hill,” “I'm In Love Again,” “Blue Monday,” “I'm Walkin',” “My Blue Heaven,” “Whole Lotta Loving,” “I'm Ready,” “I Want To Walk You Home,” “My Girl Josephine,” “Let The Four Winds Blow,” and others.

Fats Domino, Chuck Berry, Little Richard, Buddy Holly, the Everly Brothers, and Elvis Presley were among the inaugural inductees into the Rock and Roll Hall of Fame in 1986.

In 2005 Domino, who was a life long New Orleans resident, was the highest profile celebrity victim of Hurricane Katrina, and was initially reported as missing. Domino and Rosemary, his wife of over 50 years, and one of their daughters chose to wait out the storm at their home, which sits in the New Orleans' low-lying Ninth Ward.

Domino had lived there since his birth in 1928. Over the past decade of his life he had rarely performed outside of the city.

Fats Domino recalled to us how it was all he could do to keep his hands off the piano as a kid: “We always had a piano around the house. And I used to deliver ice. 'Matter of fact, every time they had a piano somewhere, they would have to come back and get me. The man said, 'Where is Fats?' They'd say, 'Well, y'know, they got a piano down there' — and that's where I would be — foolin' (at) the piano.”

In August 2009, Domino was presented with replicas of 20 gold records that he lost in the aftermath of Katrina.

The Tipitina's Foundation helped rebuild Domino's flooded Ninth Ward house, as well as giving support to many of the musicians left helpless in the wake of Katrina.

One of the standout tracks from Cheap Trick's legendary 1978 At Budokan album is the band's cover of Domino's “Ain't That A Shame.” Rick Nielsen says that the band actually got the idea to cover the song from John Lennon's 1975 Rock 'N Roll album, rather than from Domino's original version — although Domino expressed how happy he was with the band's arena-rock version of his classic hit: “Everybody kinda knew the song, but nobody had ever really played it, and so we just kinda put our own little twist to it and just made a good pop song. After the Budokan record came out, Fats Domino's manager came to our show and said, 'Fats would like you guys to have this — the original 'Ain't It A Shame' gold single.' Back then, it was only. . . the manager and the artist were the only people that ever got those gold 45's.”