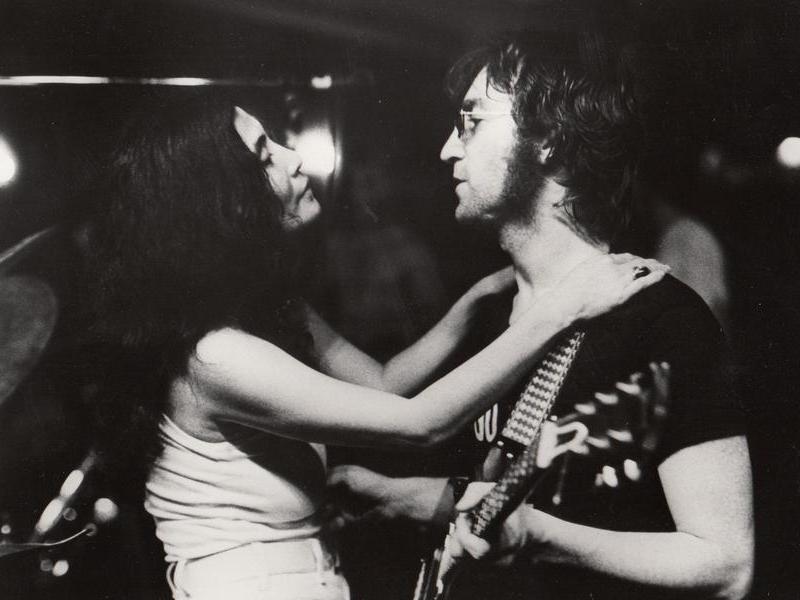 Happy Birthday to Yoko Ono, who turns 87 today (February 18th)!!! Yoko was born in Tokyo to a musician turned extremely successful banker Eisuke Ono, who was a descendant of the Emperor of Japan. Yoko's mother, Isoko Ono, is the granddaughter of Zenjiro Yasuda, of the famed Yasuda banking family. Despite her contributions to the conceptual art world, she will forever be entwined both personally and artistically with late-husband, John Lennon.

Yoko Ono and son Sean Lennon were on hand on September 7th, 2018 at the Naumburg Bandshell in New York's Central Park for the dedication of the United States Postal Service's (USPS) John Lennon Commemorative Forever Stamp. Joining the Lennon's at the event was photographer Bob Gruen, Postmaster General/CEO Megan J. Brennan, and legendary New York City DJ Dennis Elsas. The stamps have been issued in a pane of 16, with a design aping a vinyl picture sleeve. The stamps themselves use a famed 1974 photo by Gruen, with the photo on the rear using the iconic 1971 Lennon shot of him at his English Tittenhurst Park estate recording “Imagine,” captured by Peter Fordham.

In February 2016, Yoko was hospitalized and released due to flu-like symptoms and dehydration. Although the rumors quickly spread that she had suffered a stroke, it was quickly announced by her longtime spokesperson Elliot Mintz that Yoko's health issues were fully under control. Yoko was brought to Mount Sinai St. Luke's — the same hospital, then known as Roosevelt Hospital — that Lennon was pronounced dead at in 1980. Son Sean Lennon tweeted the next afternoon: “Thanks again for everyone's concern. She's home and running about as usual. Just the flu in the end. I may go get a flu shot now. . .” Yoko has been seen in public several times over the past year — albeit not quite steady on her feet. She was recently photographed using the aid of a wheelchair.

Out now is the book, See Hear Yoko. The book was originally conceived as a private gift among friends to mark Yoko's 80th birthday and was published in 2015 at her request. The book contains intimate portraits by legendary rock photographer and family friend Bob Gruen, along with the text featuring excerpts from 25 years of interviews with Austin radio personality Jody Denberg. The book is published on Johnny Depp‘s literary imprint Infinitum Nihi.

Three days prior to Lennon’s 75th birthday on October 9th, 2015, Yoko attempted to create the largest human peace sign in history in the East Meadow of New York’s Central Park. Despite the effort of 2,000 “peaceniks” a world record was not broken — with the current record of 5,814, set in 2009 at the Ithaca Festival, still standing.

John Lennon and Yoko Ono met on November 9th, 1966 — the night before he show opening at London's Indica Art Gallery, and became romantically linked sometime between mid-1967 and mid-1968. By the spring of 1968, the pair, whom Lennon took to calling “Johnandyoko,” began a long-standing artistic partnership with the recording of their debut album, called Unfinished Music No. 1: Two Virgins. The album included experimental sounds recorded in Lennon's home studio, and featured an album cover showing them nude.

John Lennon recalled meeting Yoko, who was seven years older than him, in 1966: “I'm looking for action, y'know? I see this thing, 'Hammer A Nail In' — it's a board with a chain and a hammer hanging on it and a bunch of nails at the bottom. I said, 'Well, can I hammer a nail in?' (Yoko laughs) She says, 'No.' But she came over and says, 'You can hammer one in for five schillings. I said, 'Are you. . . I'll give you an imaginary five schillings and hammer an imaginary nail in, alright?' And that's when we fell — (sings) da da da da.”

Lennon recalled that linking with Yoko as his partner ultimately meant that his days as a Beatle were fading fast: “But I presumed that I would just be able to carry on and bring Yoko into our lives, but it seemed I had to be married to them or Yoko. And I chose Yoko. y'know? And I was right.”

Despite the tension between Paul McCartney and Yoko over the decades, in his biography, titled McCartney, author Christopher Sanford uncovered a first-hand source that alleges that in 1966, prior to hooking up with Lennon, Yoko and McCartney were actually romantically linked. Sanford's unnamed source places himself at McCartney's London townhouse throughout the duration of a social call by Yoko.

Sanford told us that judging from McCartney's taste in women alone, it's not too far fetched to believe that the affair took place: “He was known for his attraction to women who were not necessarily, shall we say, traditionally good looking. And we have the source I mentioned, who says that (Paul and Yoko) displayed notable affection for each other. They went up the stairs, and he was seen hugging and squeezing her as she left later that afternoon.”

Although Lennon seemed to be reeling out of control during the early part of what he dubbed his “Lost Weekend” away from Yoko — she admitted that the split took a horrible toll on her, as well: “We were so dependent on each other's body-kind-of thing, and to be alone in bed was really very difficult. I was shaking — but I wasn't telling that to John, y'know? I thought, 'Well, this is bad that a person can not be alone, and if you're alone, you're shaking.' Well, that's very bad. But I could not say, 'Okay, let's get back together. That was not the way I was feeling.”

Joe Raiola, the writer-director of the annual John Lennon tribute held in New York City, told us that despite her many critics, Yoko Ono has never lost her integrity: “The amazing thing to me about Yoko, and I've never heard this said, and there are so many people who vilify her, who hate her, who can't stand her. Now, her husband was shot in cold blood in front of her. And all of their ideals could've been thrown out the window at that point or subsequently. All this stuff about peace and love. Not once did I ever hear Yoko call for revenge.”

Since 2003, via various remixes by outside DJ's and producers, Yoko has scored an impressive 11 Number One hits on the Billboard Hot Dance Club Play Charts. Her latest album, Warzone, was released in 2018 through Sean Lennon's record label, Chimera.

In 2017 it was announced Yoko Ono's name would be added as a composer to John Lennon's 1971 masterpiece, “Imagine.” During that year's annual meeting of the National Music Publishers Association in Manhattan, Variety reported: “NMPA CEO David Israelite showed a video from 1980 wherein John said that Yoko deserved a songwriting credit for 'Imagine' because of her influence and inspiration on it — and Israelite announced that in accordance with Lennon’s wish, Yoko will be added to the song as a co-writer.”