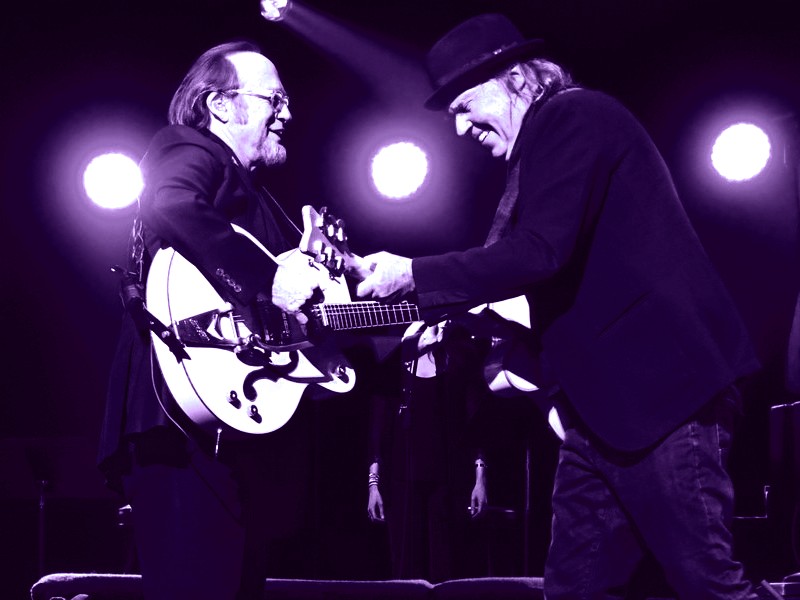 Stephen Stills and Neil Young will team up on May 30th for the 2020 “Light Up The Night” benefit at L.A.’s Greek Theater. The show will also feature performances by Willie Nelson, Lukas Nelson & Promise Of The Real, Stills' sons Oliver and Chris Stills, Lucius, and Fantastic Negrito — with Jack Black once again hosting. Stills and wife Kristen launched the charity gig back in 2013 to benefit and support Autism Speaks. The organization is near and dear to Stills' heart with his adult son Henry on the autism spectrum.

This year the show has bounced from L.A.'s 3,400-seat Dolby Theatre to the nearly-6,000 capacity Greek, with Stills telling Rolling Stone, “It’s a logical progression for us. They welcomed us with open arms. And if you go any bigger than it, it becomes a zoo. Neil (Young) warned me, 'Go too big and suddenly it turns into a thing that eats up half your year.'”

The Stills' decided to take a break last year after moving, and were motivated to gear up for this year's show by none other than Neil Young, with Stills recalling, “He just came roaring in one day. He said, 'You’re going to do it and I’m going to be there. If you need anything, just call.' Of course, it’s like trying to call Howard Hughes. But he’s always there for me. God bless him.”

For Crosby, Stills, Nash, & Young fans, the concert will be historic — marking nearly 51 years since Stills and Young performed at the Greek together during the group's legendary seven-night stand in August 1969, shortly after their fabled Woodstock appearance. Stills laughed as he remembered: “I wish I had that body (I had back then). I had a 28-inch waist and nothing hurt.”

Kristen Stills touched upon future Stills gigs further down the line, explaining, “Let’s just say there are some things on the horizon that are going to be very curated. In other words, he’s going to pick things very wisely he wants to do. It won’t be your typical tour.”

Stephen Stills and Neil Young's musical connection goes back to the heady Sunset Strip days. Stills told us that Buffalo Springfield self-destructed after only three albums, because they were simply too hot to last: “It was so laden with talent, this bunch, that we just hit the track going so fast that we went into the wall with no skid marks. Y'know, we spun out, but we spun out because we didn't realize how hot the car was.”